Happy New Year from Tasmania! Let’s add Season’s Greetings and Happy Birthday to anyone born in the last month. That’s right, unbelievable as it may sound, we have been in Tassie for over a month!

We have explored northern Tasmania, from the east coast to the west, covering around 3000 k’s (just under a third of our total so far). 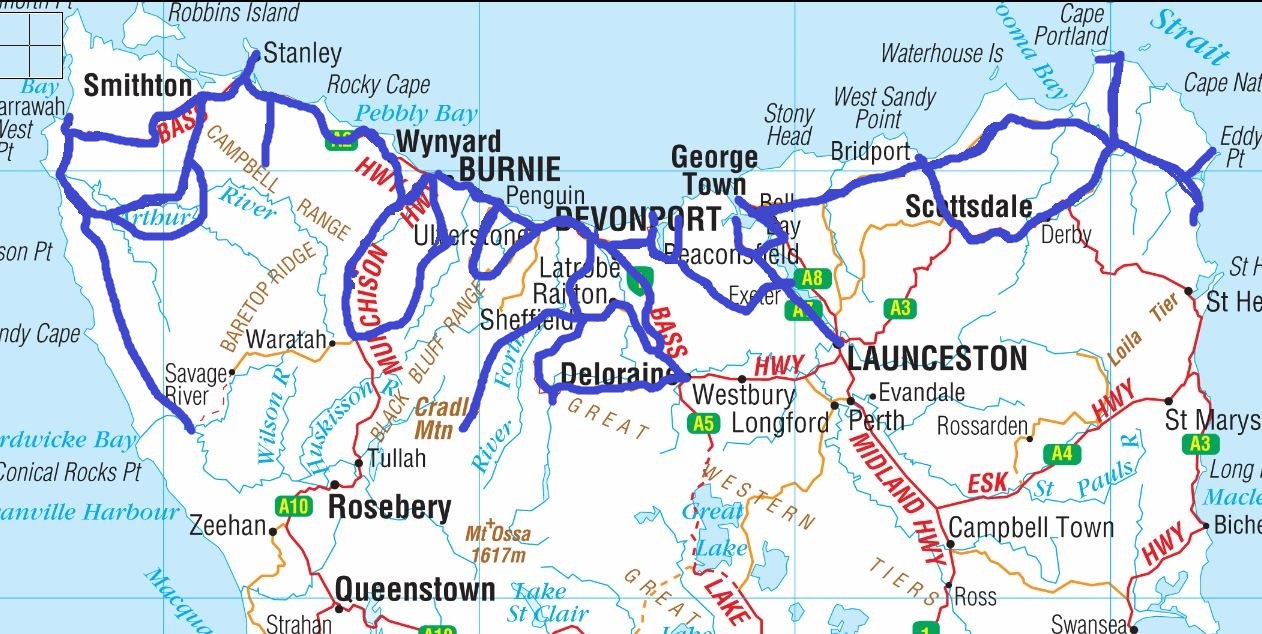 Shortly after 6pm on the 30th of November, we boarded the Spirit of Tasmania for our overnight journey across Bass Strait. It was a smooth crossing in fine weather. We had our own miniature cabin, complete with bunk beds and tiny ensuite. I slept soundly to the motion of gentle rocking, but Rod tossed and turned a bit after we “hit a small iceberg.”

We had the added pleasure of catching up with Jenna just before we sailed. My little girl is all grown up now, I couldn’t get over how fit and happy she looks and sounds. She seemed genuinely impressed with the Wombat; hopefully we will be able to repay her visit on our return to the mainland later this year. She even let me have a go on her bike! (She was standing just out of the shot to make sure I didn’t fall over.)

Of course, the first place we headed after we got off the big boat was Penguin! Most of the appeal of Penguin is in the name, but the Visitor Info centre is definitely worth a look, and of course everyone must get their photo taken with the giant plastic fairy penguin in the park. He even donned his Santa suit in preparation for our visit (maybe also Christmas).

After picking up a few supplies and taking a quick look around town, we pulled up in neighbouring town Riana, and spent our first few Tasmanian nights camped at the lovely Pioneer Park. There were powered sites, some nice shelter-sheds, an electric bbq, and hot showers. It was a great base for exploring the area.

First on the agenda was a visit to Wing’s Wildlife Refuge. The drive there through rolling green hills, planted with poppies (for the production of medicinal opiates), potatoes and pyrethrum was like travelling thru a postcard. The refuge was well-populated with Tasmanian, Australian and exotic animals, including a reptile house and several tanks full of large fish. I got to pat a baby Tasmanian devil and a baby wombat named Dug, a 12-month old orphan being raised by a rabbit. 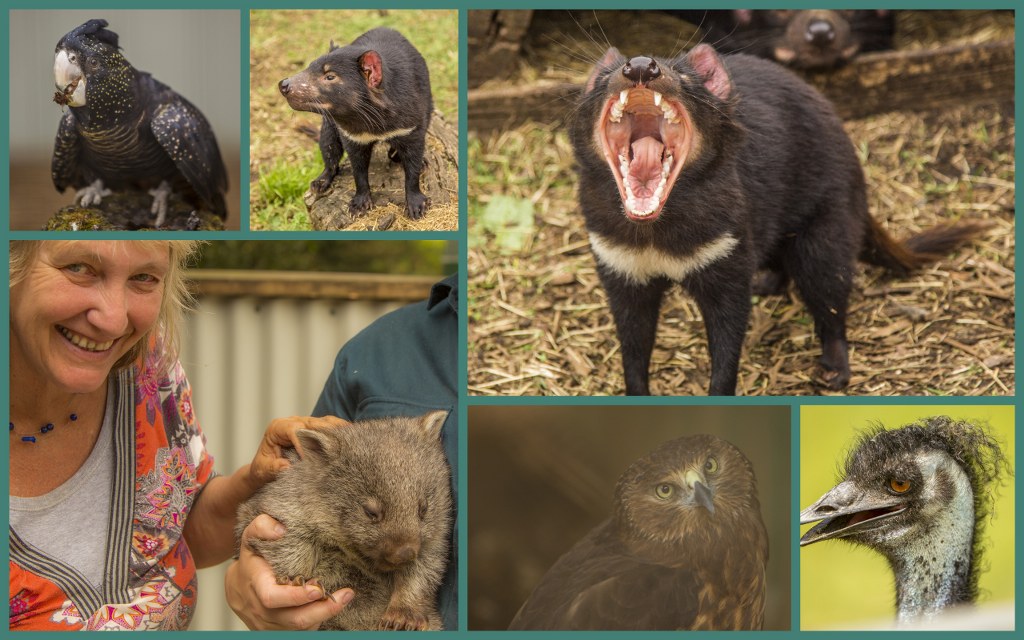 The following day we spent hiking in the Leven Canyon area, which included a walk through rainforest to spectacular views of deep limestone canyons and another walk down, down, down to the riverbed. Breathtaking scenery on our own private bush track.

Soon it was time to find a suitable place near Launceston to camp with Ethan and Liz, my son and his partner, who would join us for a week in mid-December. We found a great campground in Narawntapu NP (rhymes with “I want a poo”) and decided that this would be a wonderful place to bring “the kids” when they arrived the following week. Narawntapu is renowned for abundant wildlife, and we saw kangaroos, wallabies, paddymelons and wombats during our stay. We even had a paddymelon mascot living in camp with us. The campground was located on an inlet, with beaches made entirely of shells, and the most beautiful coloured turquoise and blue water.

In the meantime, we decided to go exploring around the northeast corner. We stayed a few nights at a free camping area called Little Musselroe Bay, just on the edge of a huge wind farm. Not surprisingly, it was a tad bit windy there at times, but very scenic and atmospheric, being in a very exposed part of the north coast.

(After a month in Tassie, I am never surprised if it gets a bit windy, very windy, ridiculously windy, rainy, cloudy or bakingly hot in the occasional sunlight. This is all in one day, mind you.)

The wind notwithstanding, it is a strikingly beautiful and rugged coast, and it was a glorious few days of sight-seeing before moving on to the east coast and Mt William NP, where we camped at Stumpy’s Bay.

Then it was time to head back to Baker’s Point to set up camp for the arrival of our visitors! It was getting pretty busy there, but as usual, we got the best spot in the campground and made it very homey for Ethan and Liz’s holiday.

What a wonderful week! Filled to the brim with so many activities, like the twilight walk around the lagoon (twilight lasts until 9 or 10pm here), barbeque picnic dinner, swimming, kayaking, hiking at Cradle Mountain, shopping at LaTrobe, a visit to a winery, a chocolate factory and cheese shop. We had campfires nearly every night, and capped off the week with the “Annual Goonengerry Christmas Eve Curry Dinner.” Well, at least we did have curry this year. 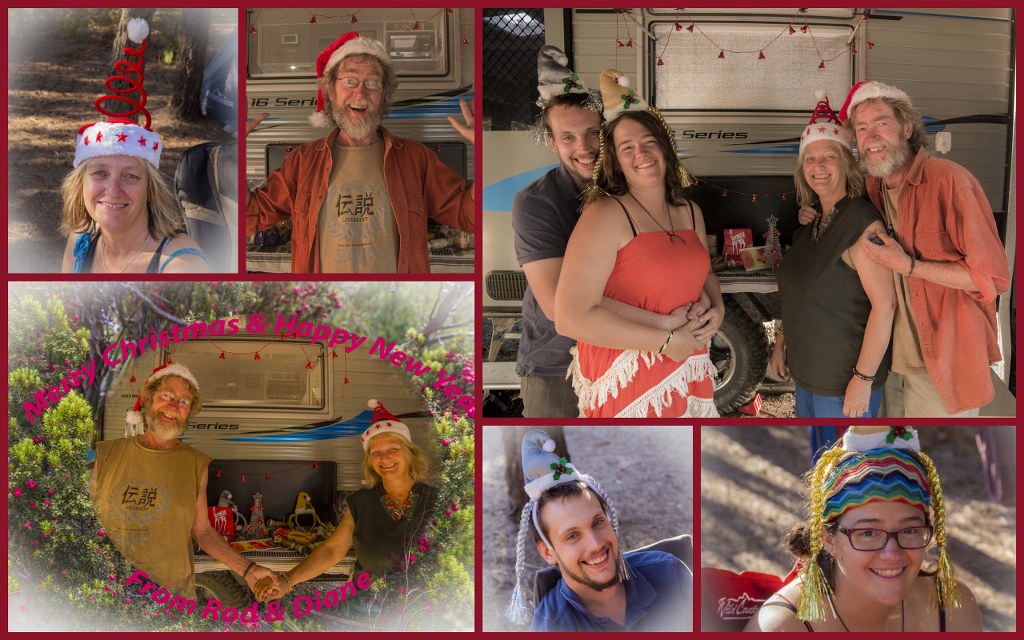 We also did the cave tour at Mole Creek and an amazing walk at Cradle Mountain, one of the most popular tourist locations in Tasmania. We had planned to do the iconic walk around Dove Lake, but found it so crowded, we chose to do a different walk from the Visitor Centre to Dove Lake, which turned out to be a much better decision. Fantastic scenery, easy walking on boardwalk, and we had it to ourselves.

A few hours later, we finished up at Dove Lake and got a shuttle bus back to our car, where we finally ate “lunch” at 4.30 in the afternoon!

Eventually it was time to say a fond farewell to our visitors and find some place to spend Christmas and New Year that wasn’t overrun with Tasmaniacs on holidays.

This time of year, leading up to Boxing Day, there is an intriguing tradition among locals, of “reserving” favourite campsites for days or even weeks before the intended arrival of any humans. Tents are set up, fees are paid in advance and it is quite challenging to find a vacant spot, even though there are very few actual campers. All over the coast and other popular destinations, there are “ghost campgrounds,” which, on December 26th, suddenly come alive with swarms of Tasmanian campers, many of whom have been camping at the same spot for years and years.

Small cities of tents, caravans, buses and swags pop up out of nowhere and stay for weeks, as family members and friends come and go. It is kind of strange to witness, but nice to see large family groups enjoying the great outdoors. There are plenty of rangers around to keep everything (and everyone) from getting too feral.

We were extremely lucky to find a quiet spot away from all the large groups of wild Tasmaniacs. We used it as a base to explore some of the great natural attractions in the North West region, like “the Nut,” and the “Edge of the World.”

The Nut is a big iconic volcanic plug, towering over Stanley, an historic fishing town which also thrives on tourism. There is an unspoken challenge to everyone who visits Stanley, to tackle The Nut, either by paying ten bucks to ride the chairlift or walk the insanely steep but short zig-zag track to the top. From the top, you can do a walk around the edge, taking in the scenic views, followed by a chairlift back down the steep sides or back town the walking track. We chose to zig-zag up and take the chair lift back down. It was a good decision, as the steep ride down the mountain satisfied my appetite for thrill-seeking, and the views were amazing.

The Edge of the World is at Arthur River on the far north-east corner of Tasmania, where the coast is regularly lashed by the Roaring Forties, coming across the longest uninterrupted expanse of ocean in the world. There is a plaque and a famous poem by Brian Inder at Gardiner Point, inspired by the dramatic coastline and climate.

We had a very quiet Christmas at Black River. A few decorations, a very cute Santa and a campoven lamb roast cooked in the fire. Low key, and very special.

Next we are off to see a bit more of The Tarkine, which is a vast area in the north west, comprised of rare and ancient rainforest, wetlands, coast and many endangered plants and animals, including one of the few remaining disease-free populations of Tasmanian devils in the wild.