It was time to leave The Red Centre; time to check out what else there was to see in The Territory. It was also 1,500 km’s to Darwin, so with the bitumen once again under our tyres it was time to crank up the music, turn on the aircon, and join the stream of nomads and gypsys heading to the Top End.

Apart from dusty tracks disappearing into the desert, ominous signs warning no fuel or food for hundreds of kilometres and the occasional roadhouse, there is not much to break up the flat, dry plains between Alice and Katherine.

At the (roughly) halfway point in our trip north, at Tennant Creek, we stopped off to check out The Devil’s Marbles – a bunch of interesting rounded rocks that are scattered across the plains.

While there is a stream of camper trailers and caravans, motorhomes and 4×4’s travelling the outback, the blacktop belongs to the road trains.

These massive beasts are up to 60 metres long, they are on a deadline and they mean business. We treated them with the respect that they deserved.

One of the great joys of travelling with no particular timeframe or set itinerary is that every now and then you stumble across unexpected magic camp spots, where you can stay as long as you want. One such place was Longreach Waterhole near the small town of Elliot on The Newcastle Waters. It is a long, narrow billabong, teaming with water birds and raptors.

Once we had soaked up enough of that vibe, we headed on up the road …we were almost in The Top End! A quick detour to quirky Daly Waters for the obligatory Barra Burger and Beer and an overnighter and swim in the hot springs at Mataranka, then… 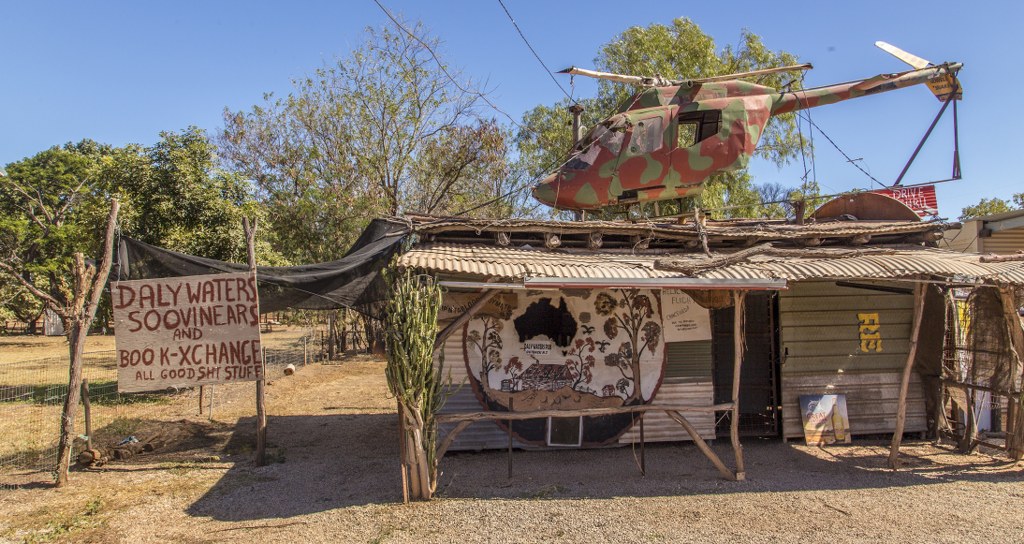 We were getting closer and closer to the Equator with every kilometre, and when we finally drove into Katherine and got out of Leo, a wall of hot air hit us. We had arrived in TTE!!

I was very keen to see Katherine Gorge, so leaving Dee relaxing under a shady tree, I set off on a long walk along the gorge rim on a lovely sunny morning. By mid-day I was a long way from Leo with no shade and temperatures in the mid 30’s. No wonder I didn’t see any other hikers. At least I got some good views and photos of the gorge. 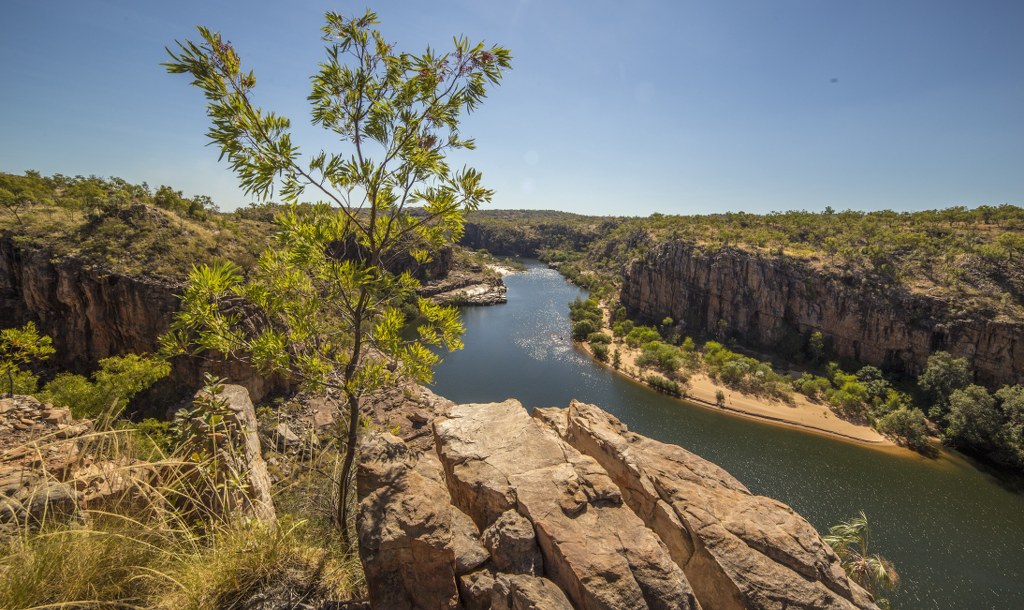 While we were attempting to adjust to the hot temperatures up here, we were faced with another issue that was threatening to negatively impact on our enjoyment of this part of The Territory. We had arrived smack bang in the middle of school holidays and the height of the Grey Nomad migration. The campgrounds and caravan parks were very crowded and very expensive. 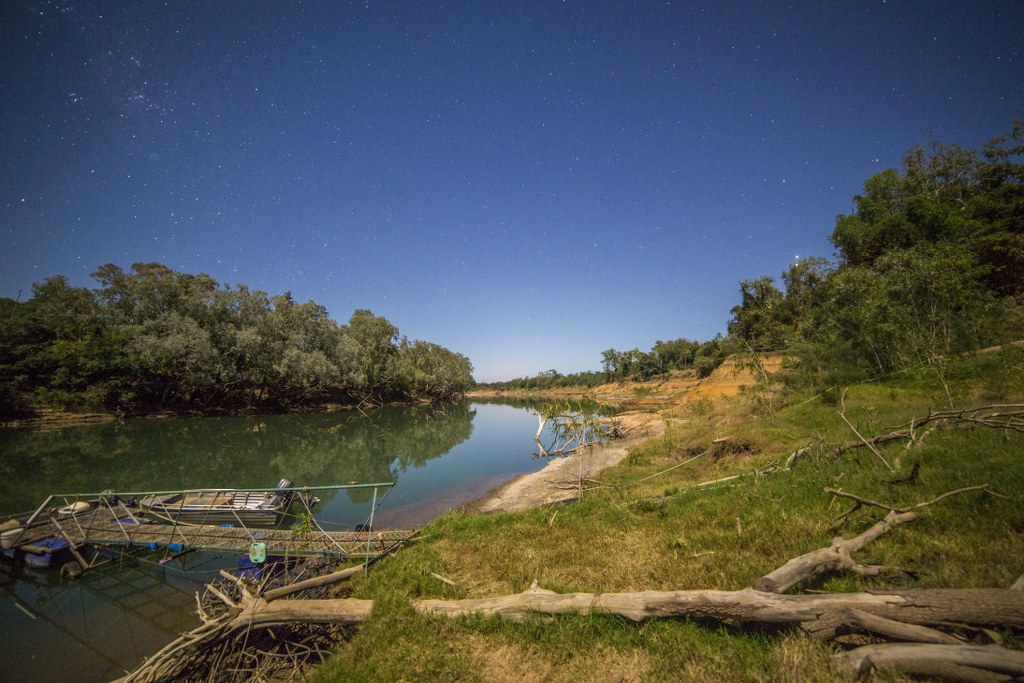 After poring over maps during many strategy meetings, we decided to head to Daly River, just south of Litchfield National Park. Turned out to be a great decision. We stayed a week at a lovely spot on the river called Lee & Jenny’s Bush Camp. We had our own shady, private spot at a very reasonable price from which we could do day trips to explore the surrounding areas. The river looked very inviting for a dip, till I looked a bit closer. Maybe a cold shower would be better! 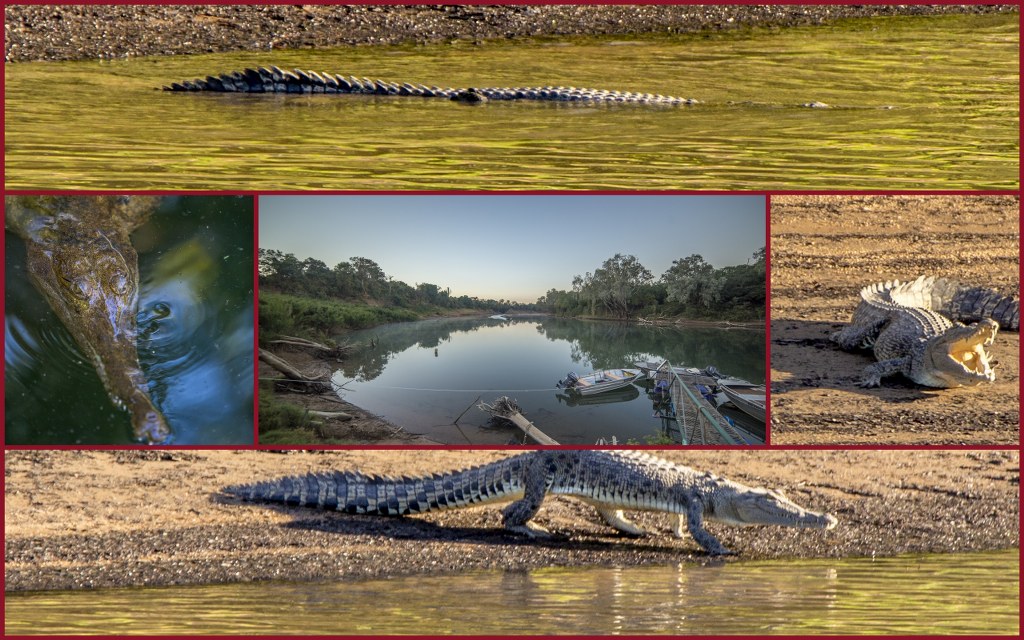 Litchfield National Park is stunning, a landscape shaped by water and time, culturally rich and steeped in history. After reading about it for many years, we were excited to see it for ourselves. A short drive from our Daly River campsite there was a great 4×4 track through the southern section of the park that not many people get to see. The first pleasant surprise for us were the beautiful waterholes of Surprise Creek. Time to jump in and cool down! 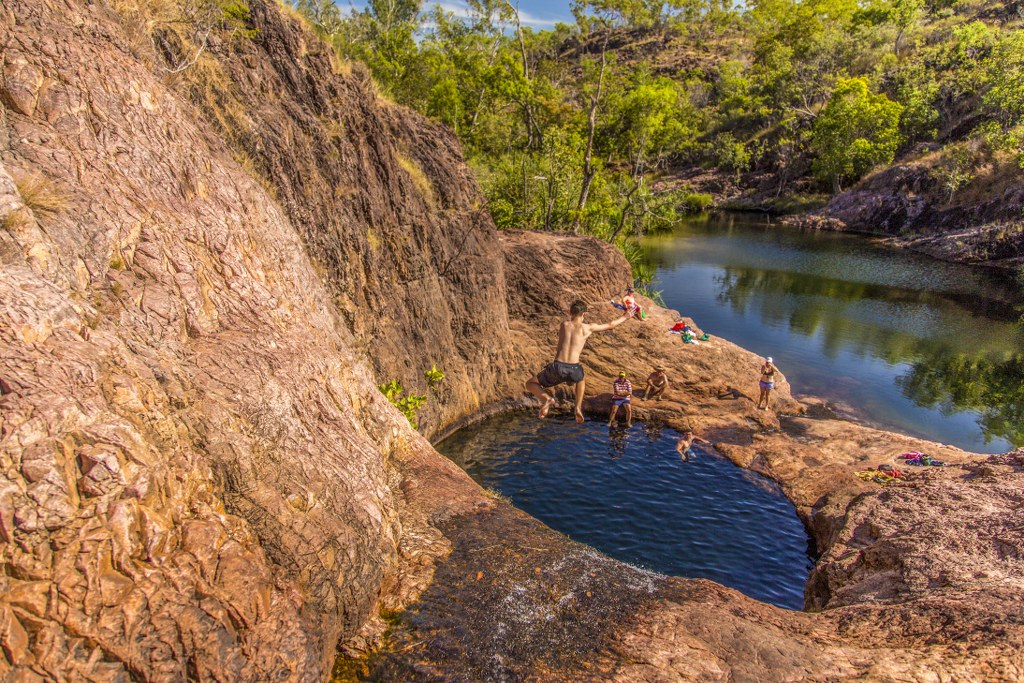 One of the attractions Litchfield National Park is famous for, is the variety and abundance of termite mounds, some so big they even dwarfed Leo! 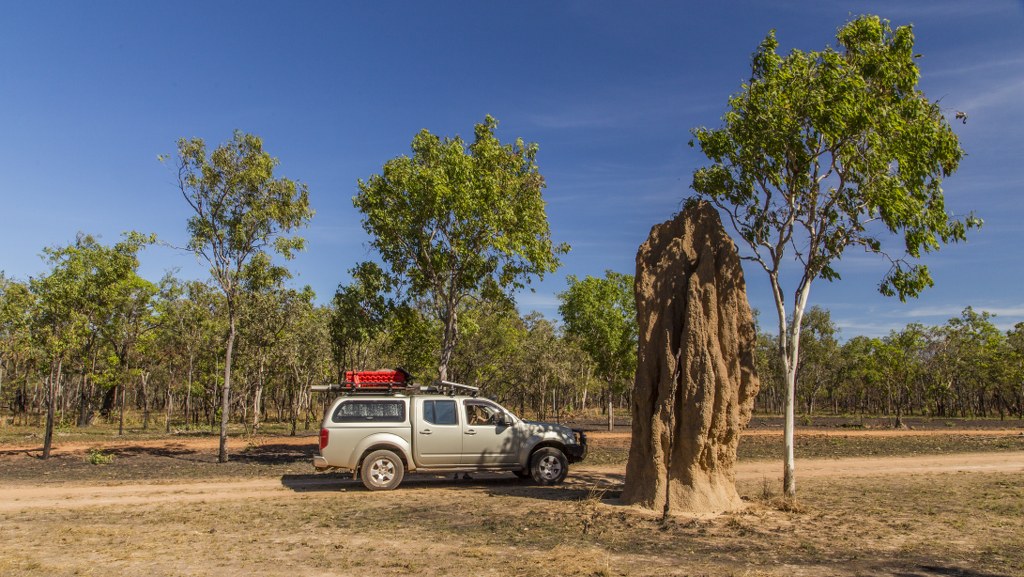 There are hundreds of different species of termites in Australia, all with different architectural styles. One of the most interesting and clever species are the builders of the magnetic termite mounds that face north/south to avoid the midday heat. We had lots of fun checking them out.

We also did a big drive to Darwin from Daly River for a bit of culcha and, of course, to dip our toes in The Arafura Sea. 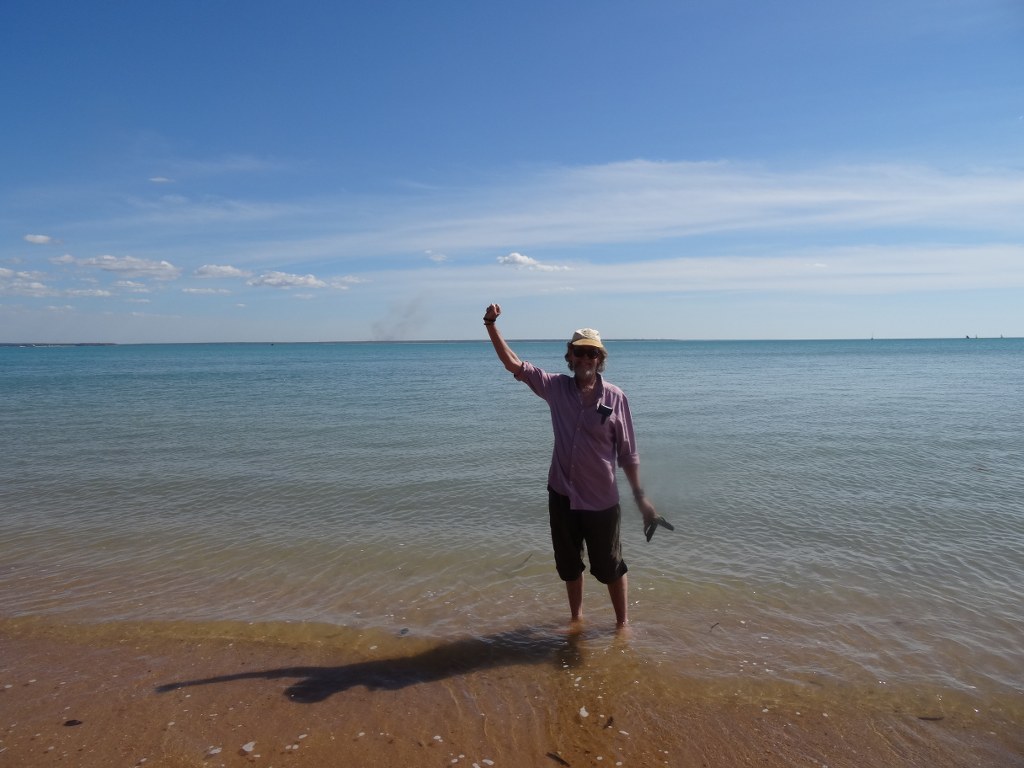 Spent a lovely time wondering around the Botanical Gardens and the Museum and Art Gallery. 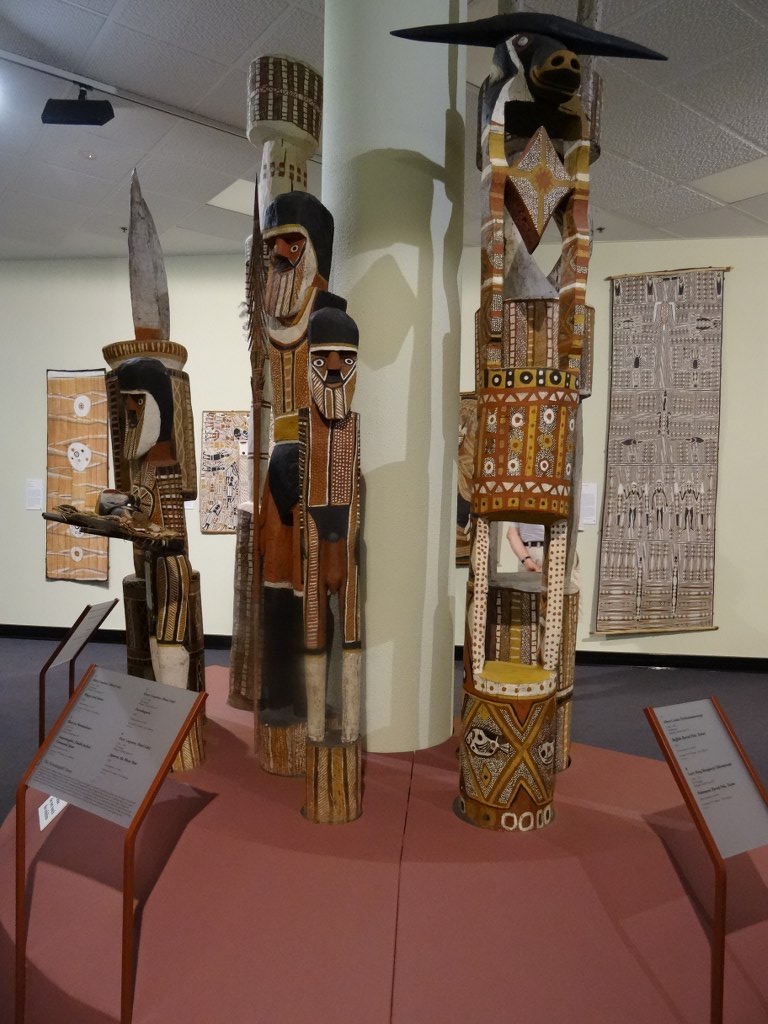 We also got to indulge in a bit of retail therapy – this being the biggest town we had been in for ages.

Even though there was still large chunks of The Territory to see, it was time to turn the rig west and head for Western Australia. The Kimberly was calling us.