After hundreds of kilometres of rough, dusty, dirt road of the Oodnadatta Track it was great to have bitumen under our tires again as we re-joined the Stuart Highway at Marla and headed up into “The Territory” ready to explore The Red Centre of Australia..

One of the first things that struck me about The Northern Territory is just how bloody big it is and how few people actually live there. The distances between places are huge. The Yalara Resort near Uluru is over 400 km from Alice Springs, and Alice itself is roughly 1500 km from Darwin. At least the roads are pretty good, and on much of the highway one can drive as fast as you like. We still cruised along at around 80 km/h getting exercise from waving to the constant stream of travellers we passed who insist on being friendly.
Our first destination was Uluru. We were keen to find out what all the fuss was about this iconic Ozi monolith and it’s slightly lesser known “cousin” Kata Tjunta (The Olgas)

Not only is it a long drive to get there it is also expensive to stay and get entry to the Park. We managed to minimize costs by staying at Curtin Springs Station, a lovely free camp outside the park and buying a partly used three day pass from fellow travelers for cheap. Frugal old farts are we!! We had the added bonus that the day we went it was actually raining on The Rock. Something that very few people get to see.

It was a big, but wonderful, day doing walks through The Olgas and around The Rock. Quite spectacular I must say. We both actually enjoyed the Olgas more – great views around every corner and not nearly so many people. 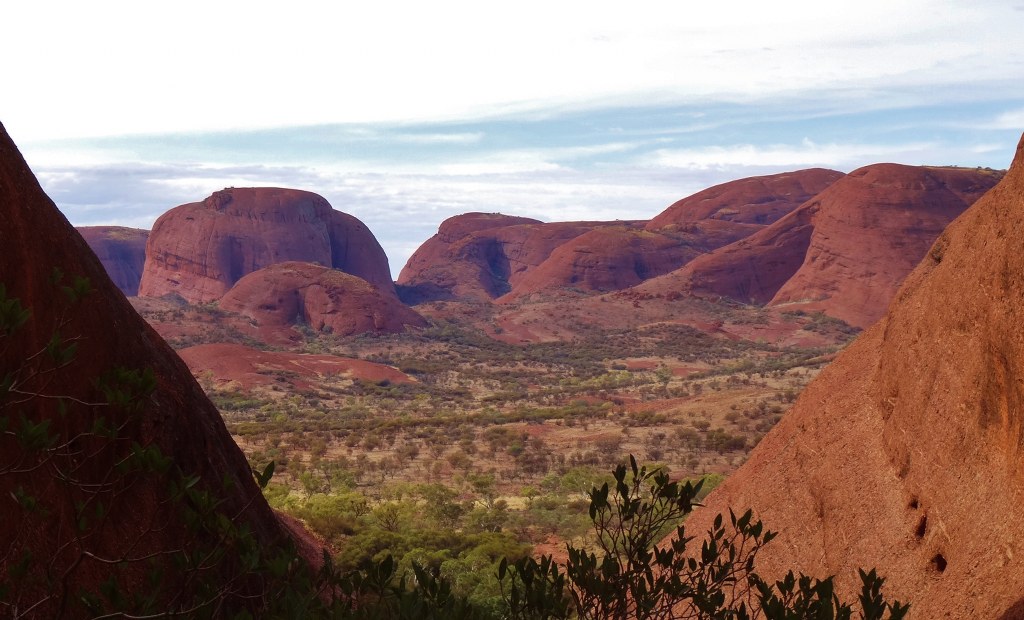 Next it was time to drive a mere 160 km to The Watarrka National Park so that we could explore the walks in and around Kings Canyon. The signature walk here is the canyon rim walk, touted as being one of the best walks in the Northern Territory. Haven’t seen enough yet to judge but it was pretty bloody good I must say.

We even scored a cool, cloudy morning to do it with a minimum of flies and fellow tourists. Needless to say both of our cameras got a good workout too. 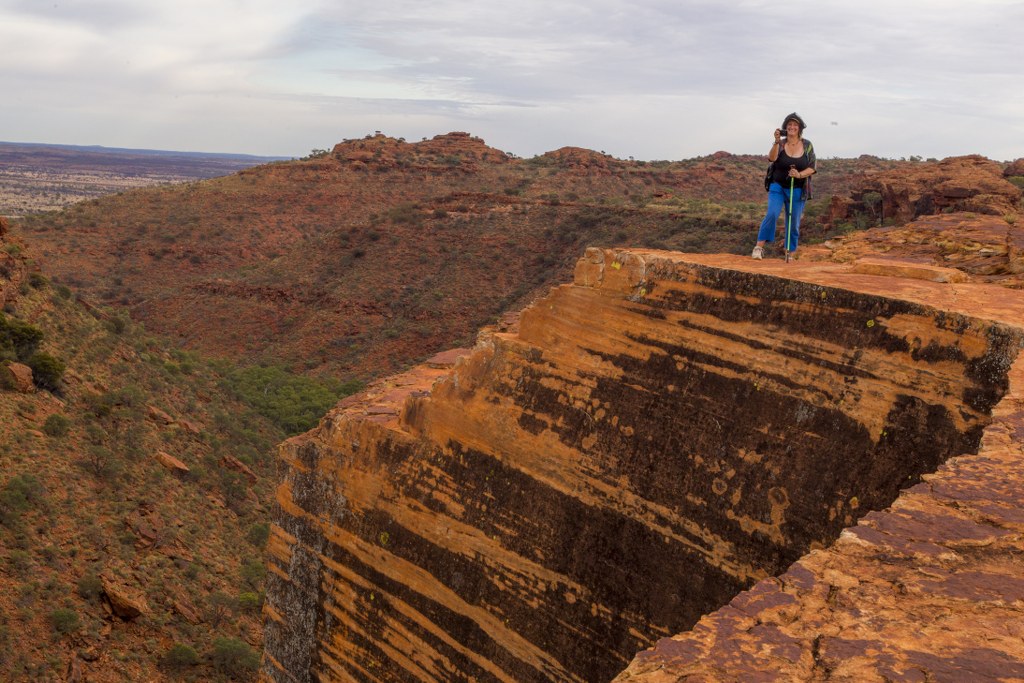 After ticking that off, fueling up with very expensive diesel, and buying our pass to go through aboriginal land on The Mereenie Loop it was off to Hermannsburg on some of the roughest, dustiest, dirt road we had been on. 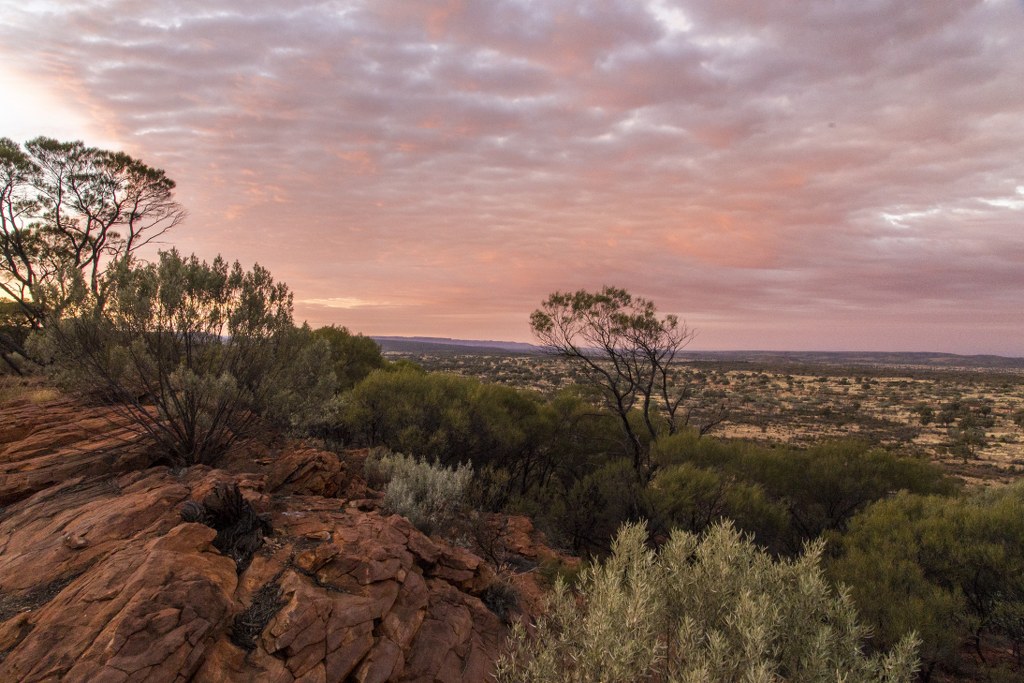 Very corrugated, and oh, did I mention that it was a bit dusty? Each time a vehicle went past we had to stop for a couple of minutes till the dust settled so that we could see the road again. The plan had been to go from Hermannsburg to Palm Valley for a couple of days before heading on to Alice but once we hit the bitumen the lure of a decent sized town with comforts and conveniences won out and we dusted ourselves off and headed for Alice.
It turned out to be a great thing to do, as within a day of arriving we found ourselves housesitting in a lovely house, complete with sweet little dog and a backyard full of cute chooks. 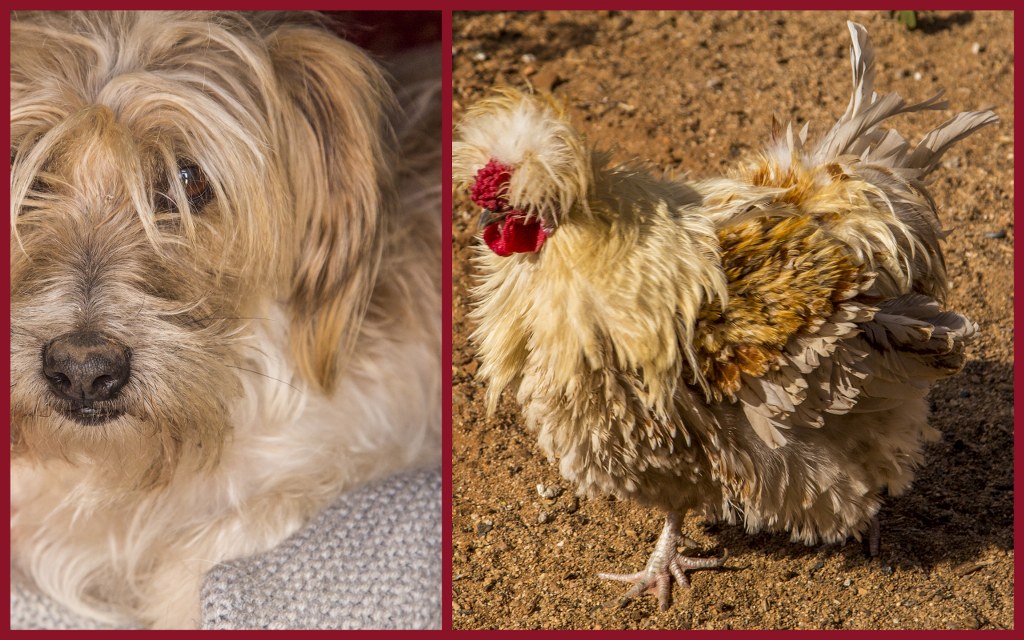 After over eight months living in a caravan on the road it is so nice to be able to spread out, chill out, and clean out. Great base for exploring the area around here too.
There are many things to do and see in, and around, Alice. The town is nestled in a valley in the middle of stunning MacDonnell Ranges. The highest spot near town is Mount Gillan. A great place to climb up to get a good perspective on the lay of the land. It also is very picturesque first thing in the morning. 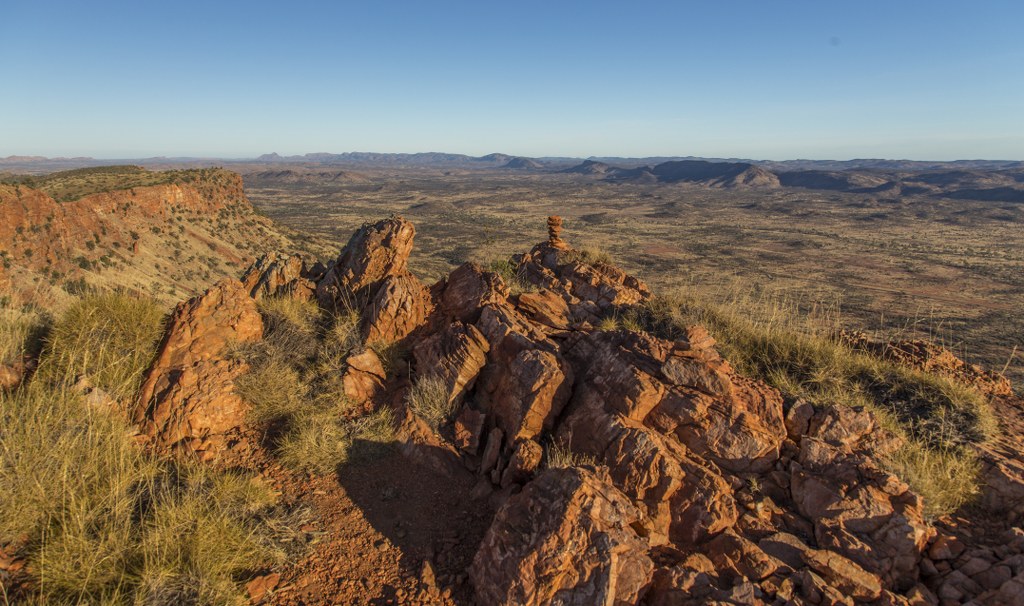 One of the favourite things that we did in Alice was to spend a day at The Desert Park. It is a large park showcasing many of the plants and animals that occur throughout this arid region. Not only was it interesting and informative, it was a great way to get up close to many of the birds and animals that live here. 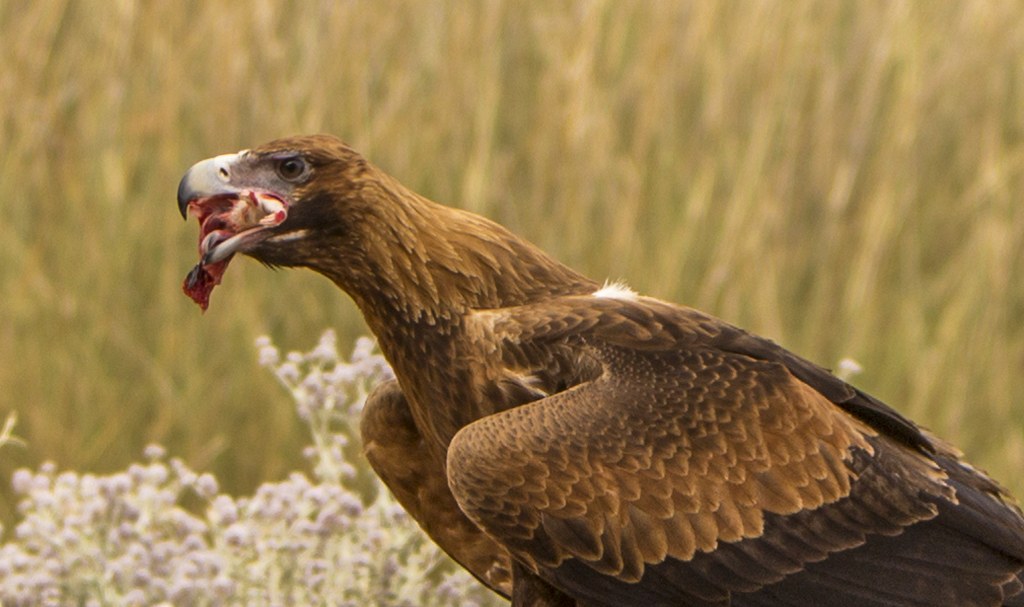 Rather than relocate our gypsy caravan hundreds of kilometres out of our way, I decided to check out the West MacDonnell Ranges on a day trip. I had heard that Ormiston Gorge was a great place to do an extended walk and experience a little bit of the Larapinta Track. Heading off at dawn, I had the gorge and the pound to myself – very beautiful. 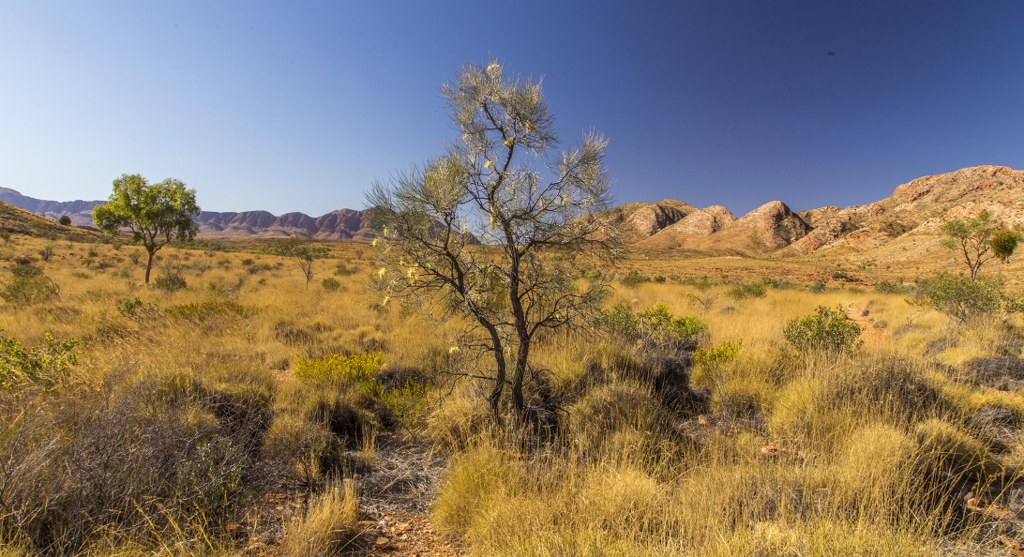 On my way back home I stopped off to see the Ochre Pits where Aboriginal people sourced different coloured ochres for ceremonies for many thousands of years. 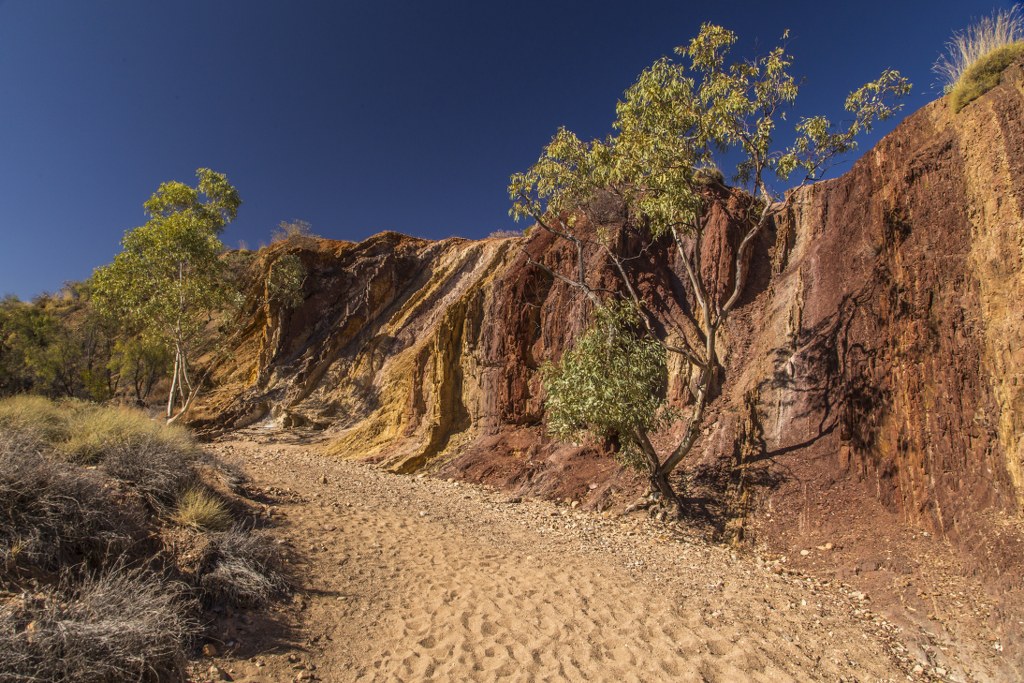 Our two weeks in Alice flew by. Rested, relaxed, stocked up with supplies, it was time to hit the road again and check out The East MacDonnell Ranges. Very Exciting!!