Leaving the massive mining operations around Newman behind, Leo and The Wombat were heading into The Heart of the Pilbara. Just like The Kimberley, The Pilbara is a vast and extremely diverse area, which stretches from The Great Sandy Desert in the east to pristine waters of the Ningaloo Reef in the west. 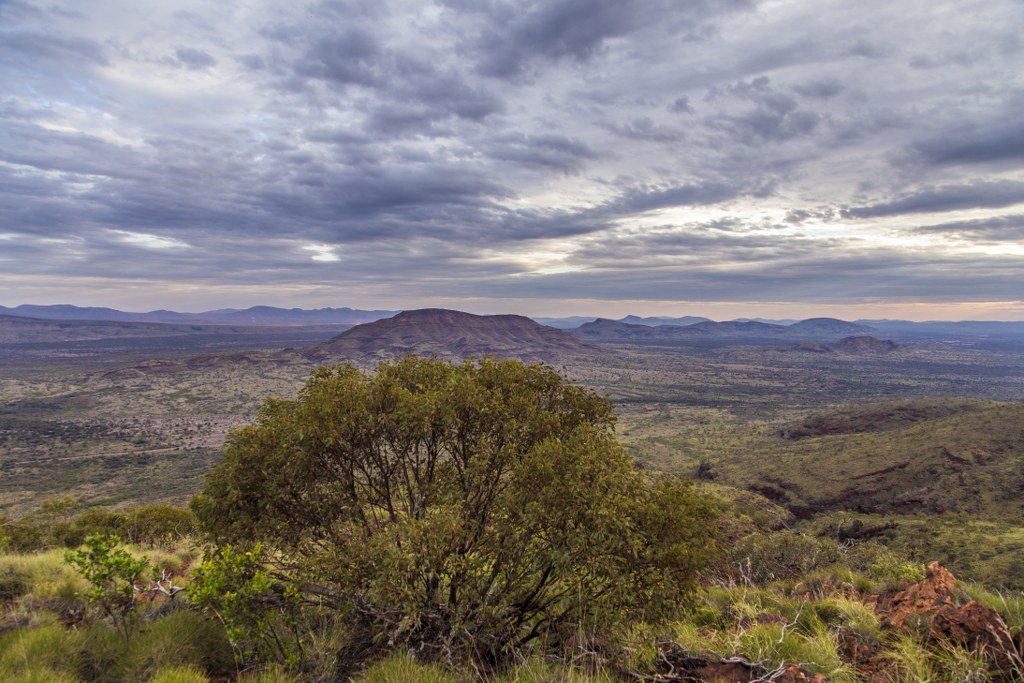 Wikipedia describes it as “a large, dry, thinly populated region in the north of Western Australia. It is known for its Aboriginal peoples, its ancient landscapes, the red earth, its vast mineral deposits, in particular iron ore and as a global biodiversity hotspot for subterranean fauna.

The region has an estimated population of 48,610 as of June 2010. The Pilbara covers an area of 502,000 km2, which includes some of Earth’s oldest rock formations. It includes landscapes of coastal plains and mountain ranges with cliffs and gorges. The major settlements of the region are Port Hedland, Karratha and Newman.

The area is known for its petroleum, natural gas and iron ore deposits, which contribute significantly to Western Australia’s economy. Other than mining, pastoral activities as well as fishing and tourism are the main industries.”

Our destination was Karijini National Park. Massive mountains and escarpments of The Hamersley Range rise out of the flat valleys. The high plateau is dissected by breathtaking gorges, and stony, tree-lined watercourses wind their way over the dusty plain. Erosion has slowly carved this landscape out of rocks that are over 2,500 million years old. 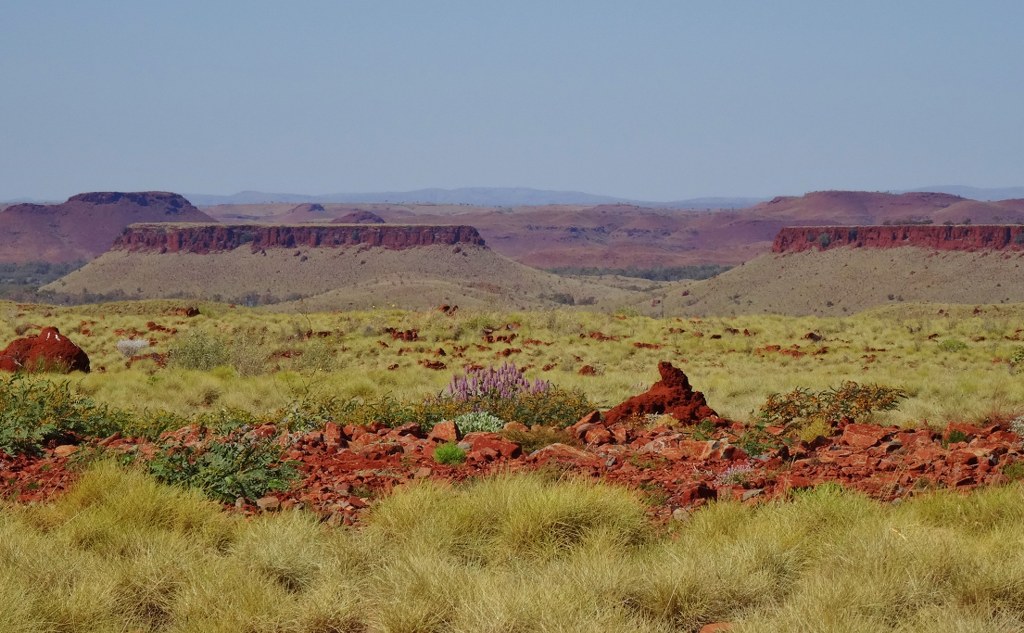 There is only one National Parks campground in Karijini. It is situated next to Dales Gorge, around 10kms from the excellent visitors centre. Karijini is a very popular park for travellers to visit (quite rightly) and the campground has over 130 separate campsites and is often fully booked out during “the season”. Initially this didn’t sound like it was going to be our kind of place. However, when we got there we were greeted by the very friendly and welcoming Camp Hosts and directed to a lovely spot surrounded by trees some distance from our nearest neighbours. The campground is spread out over 6 hectares with good spacing between sites and sections segregated into generator and non-generator areas.

The many gorges in Karijini offered wonderful walks 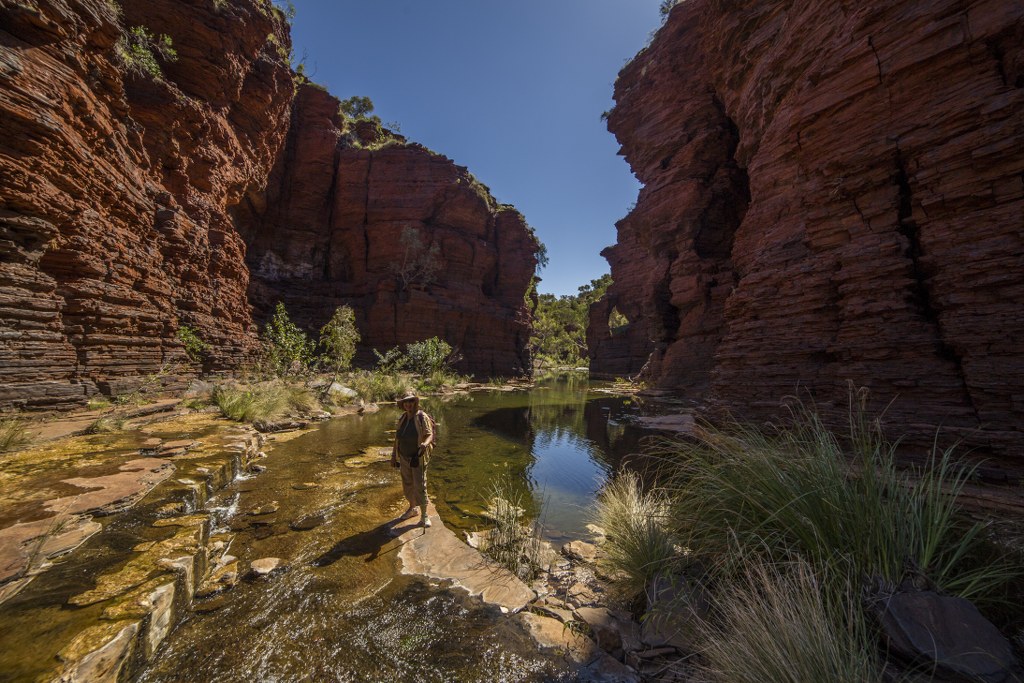 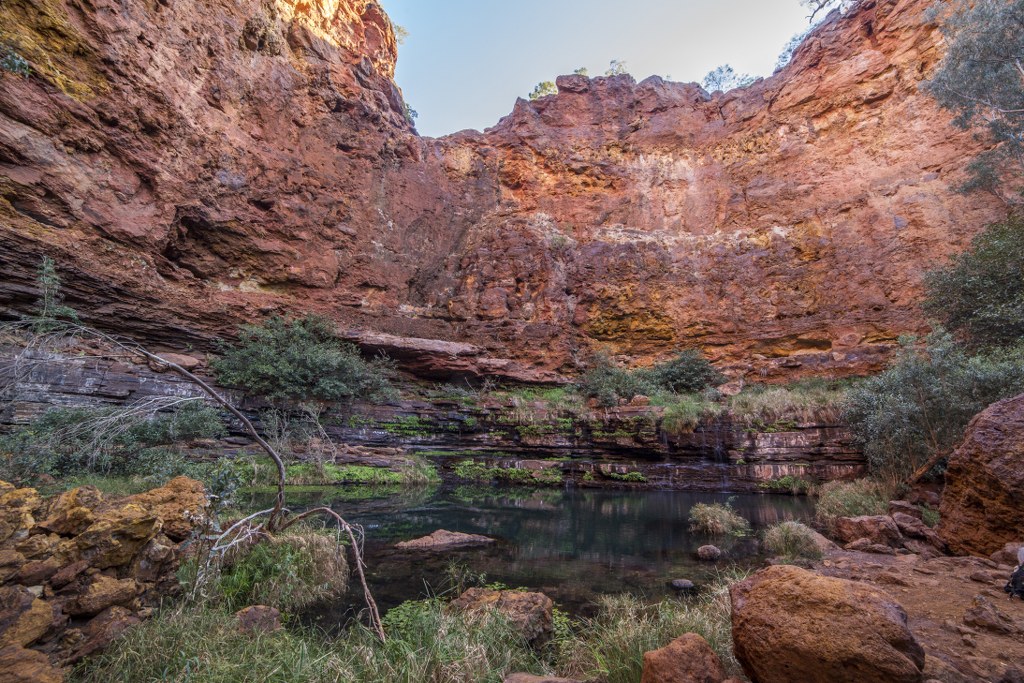 ……..and lots of spots to get wet. My water-baby travelling companion was very happy indeed! 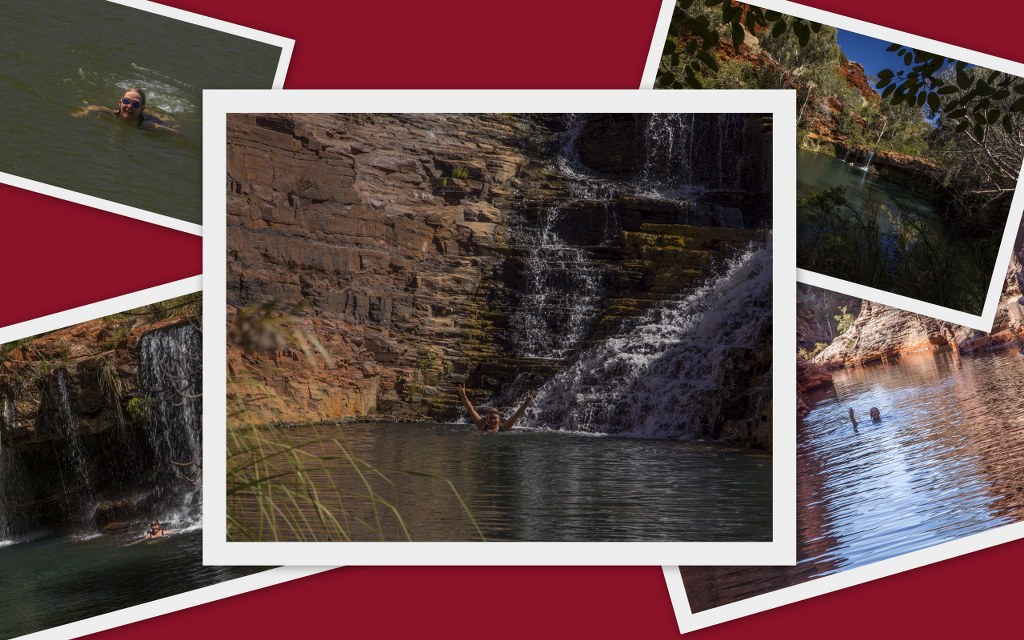 We ended up spending almost a week happily exploring the area, walking, cycling, swimming, and relaxing. Beside Dales Gorge we went to 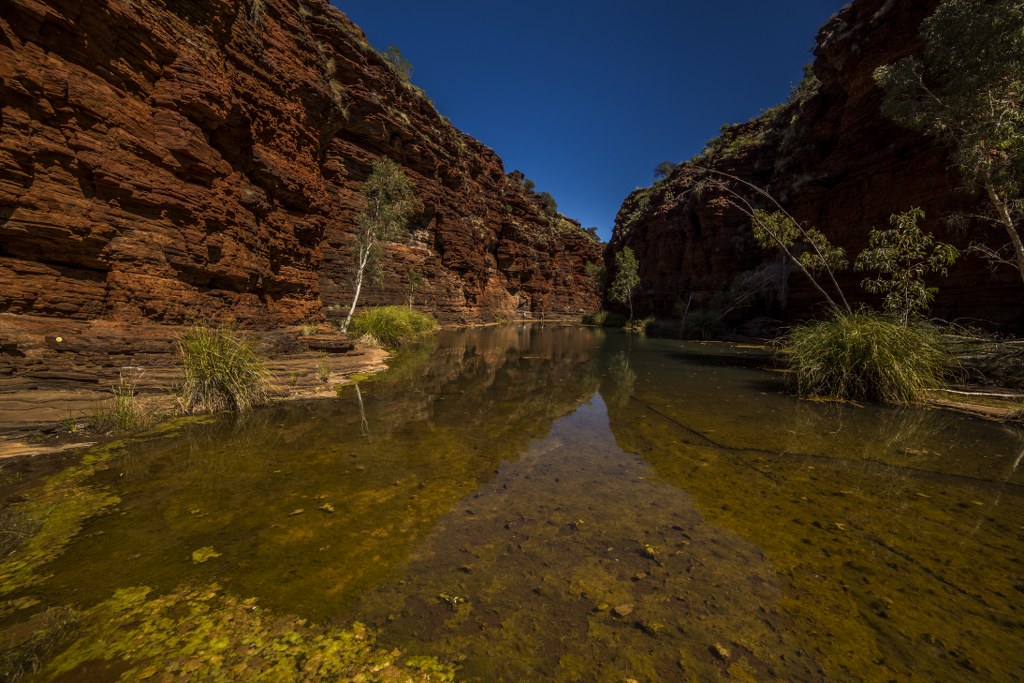 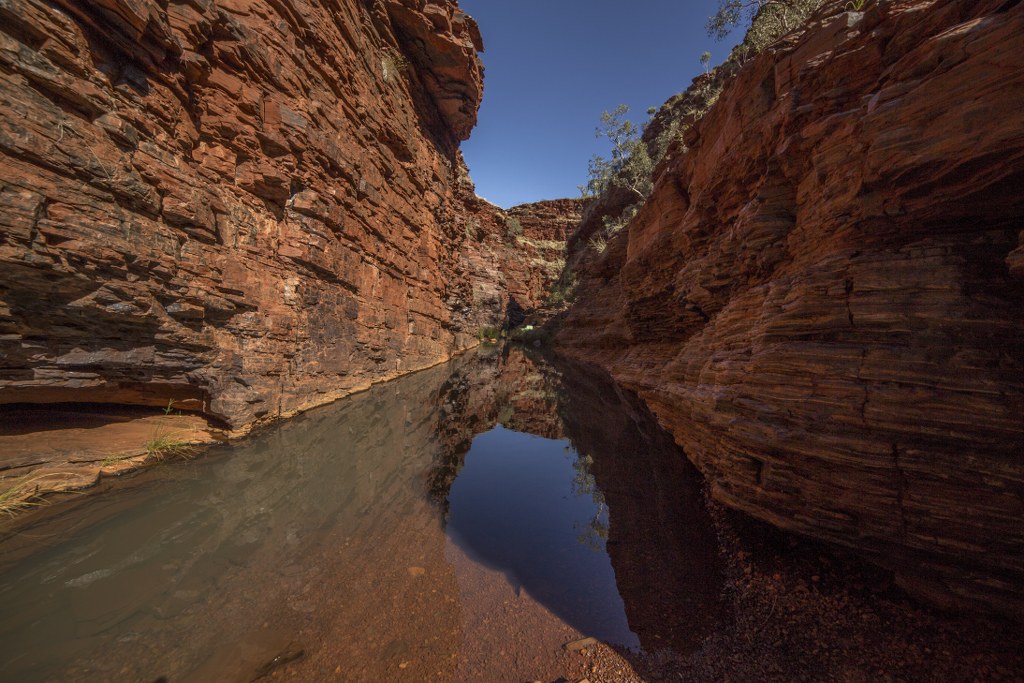 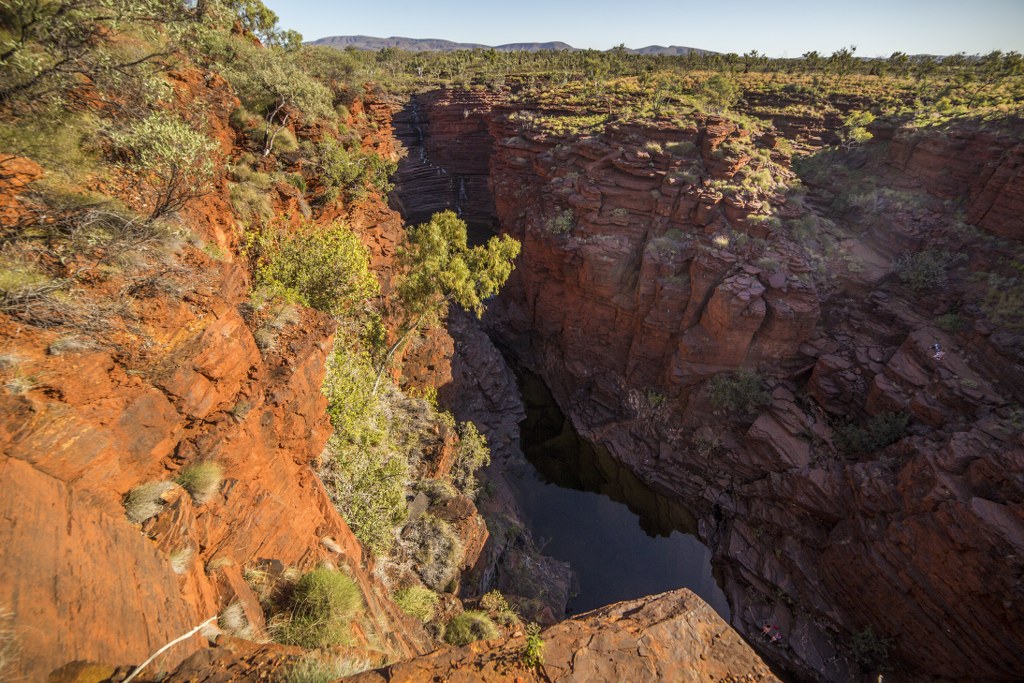 before relocating to possibly the most spectacular gorge in the park, Hamersley Gorge. We had a lovely campsite nearby where we could sit beside the fire under the umbrella of million stars. 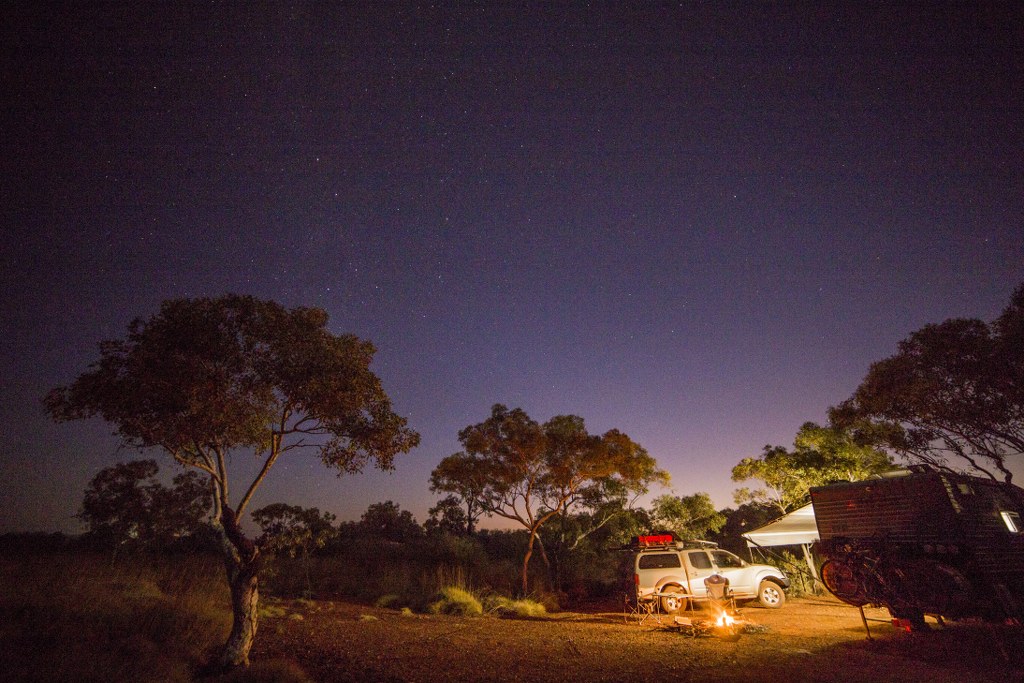 The rock formations in The Hamersley Gorge are amazing. You can see how the land twisted and bent into tortured shapes millions of years ago.

A couple of hundred kilometres North-west of here is Millstream Chichester National Park, an oasis in the desert, nestled within the chocolate brown rocks of the Chichester Range, dotted with spinifex and snappy gums. Permanent pools are fed by springs that draw water from the underground aquifer within porous dolomite rock. We spent two nights there and got to explore by foot, bike and 4×4 tracks.

Although it was pleasant enough, it was not a patch on Karijini. 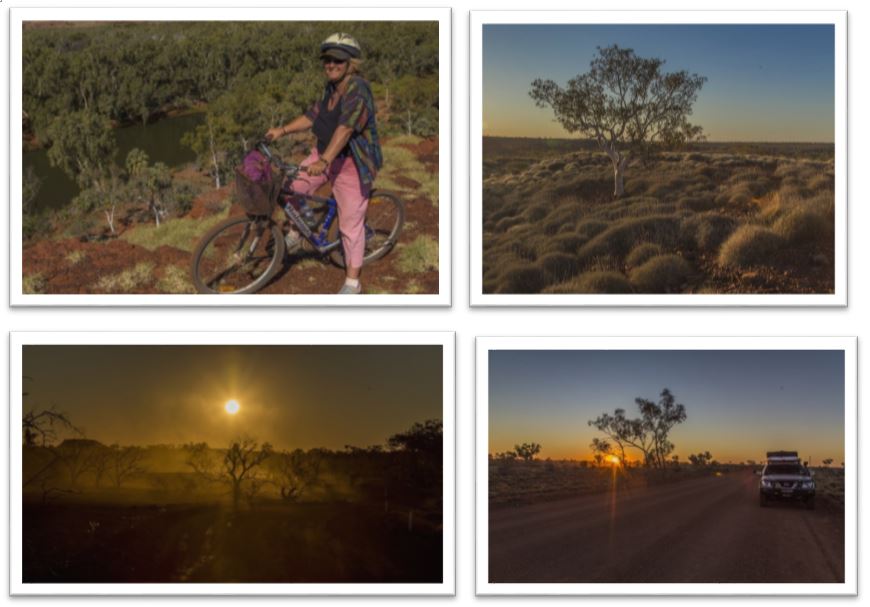 The days were starting to get hotter and the coast was calling us. Ningaloo Reef here we come!

More of Rod’s Heart Of The Pilbara pictures here 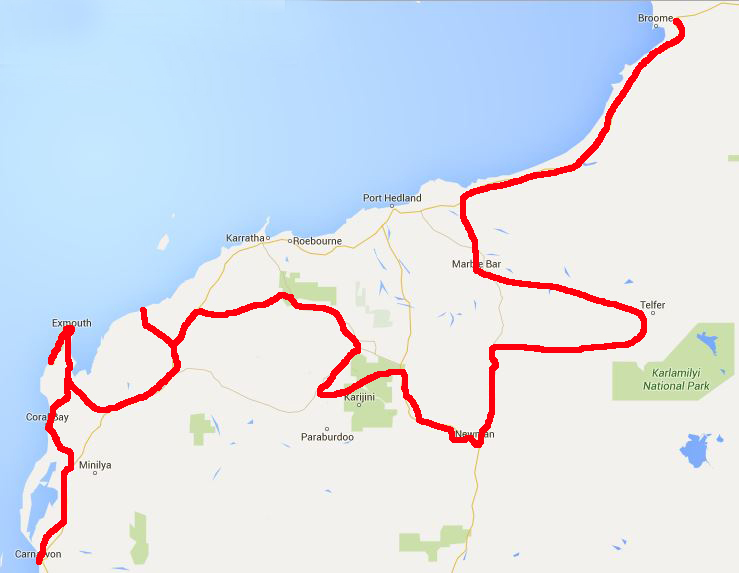