Even though Rod didn’t completely run out of mountains to climb, after 2 weeks in The Grampians, we decided it was time to make our way to the south-west coast of Victoria and The Great Ocean Road. We met up with the coast at Killarney, between Warrnambool and Port Fairy, camping at the Rec Reserve for a few nights while we checked out the area. 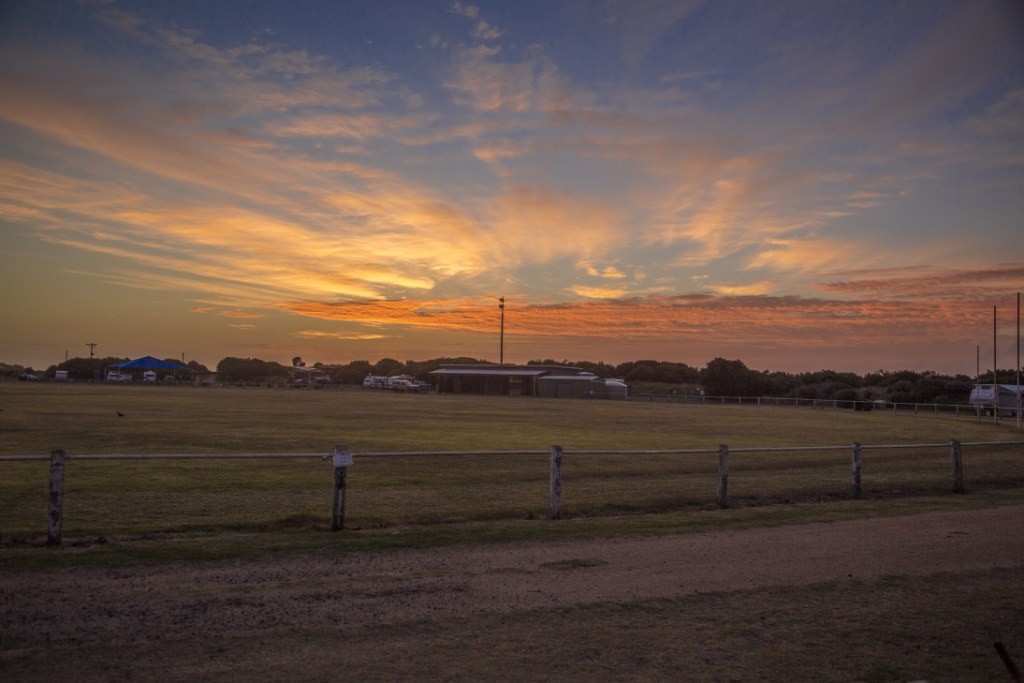 In terms of accommodation, this $5/night campground ticked most of the boxes: sheltered spots to escape the windy conditions, quiet neighbours, hot showers and drinking water, and there was even a Sunday cricket match on when we arrived!

We made good use of our time while we were there, took in a matinee of The Second Best Exotic Marigold Hotel in “Warny” and explored Port Fairy on foot, particularly around Griffiths Island and the Moyne River. It’s a charming seaside town, dripping with history, fishing enthusiasts and more holiday accommodation than you can poke a stick at, lined up along the coastline, the sweet little marina and the picturesque River.

After a few days, we moved on, but we didn’t move far. Our next layover was Princetown, another Rec Reserve, in striking distance of some of the most iconic – and popular – attractions along the Great Ocean Road. The Twelve (Seven) Apostles viewing area was wall-to-wall people on the afternoon of our first visit! It was a bit of a shock to the system. We instantly made plans to come back when there was a bit more elbow room, and got the hell outta there. 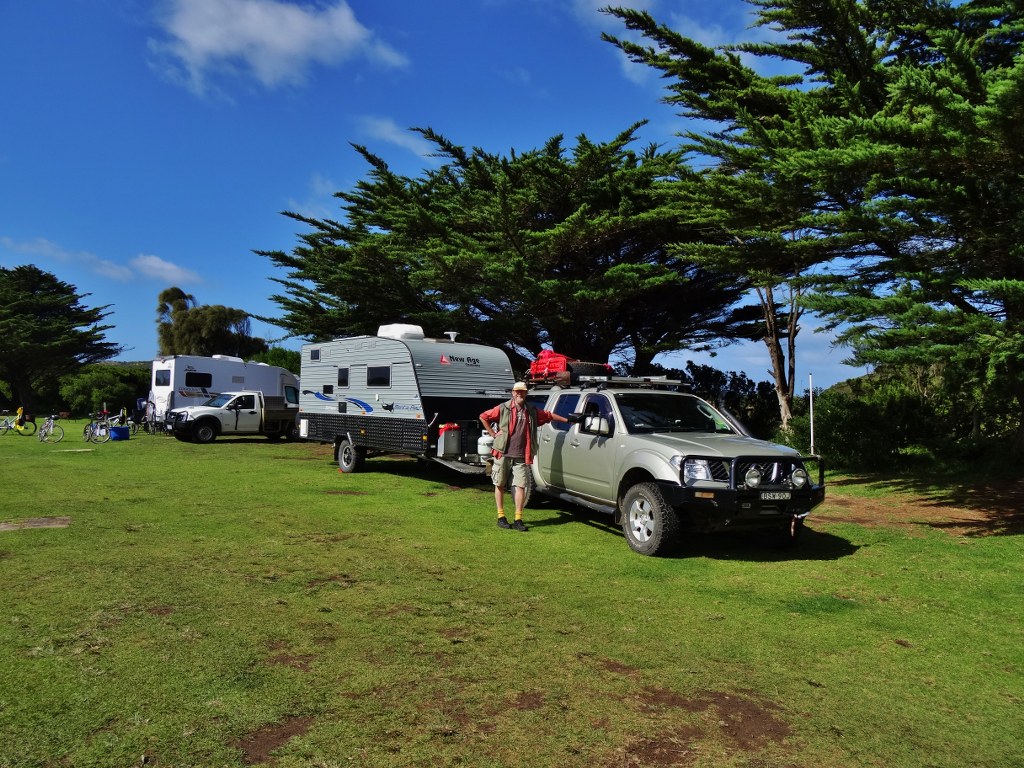 On the morning of our mission, “Apostles at Dawn,” everything went pretty much according to plan, we got ourselves up and organised, hot coffees and homemade EggMcMuffins in hand, arriving at our chosen destination just before sunrise. There were only a dozen or so other devotees there at that hour – about 5% of the hordes from our previous visit. 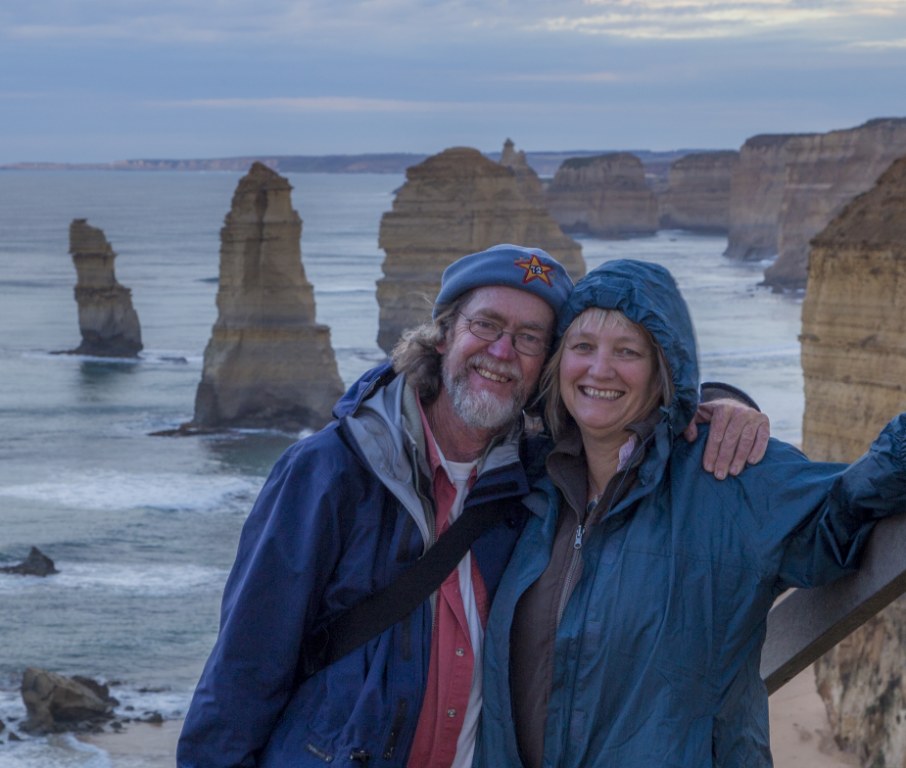 We took a few hundred snaps, then took in the uncrowded attractions nearby, like London Arch (used to be London Bridge, but the bridge part fell into the sea in early 1990) and Loch Ard Gorge, which lived up to its name. 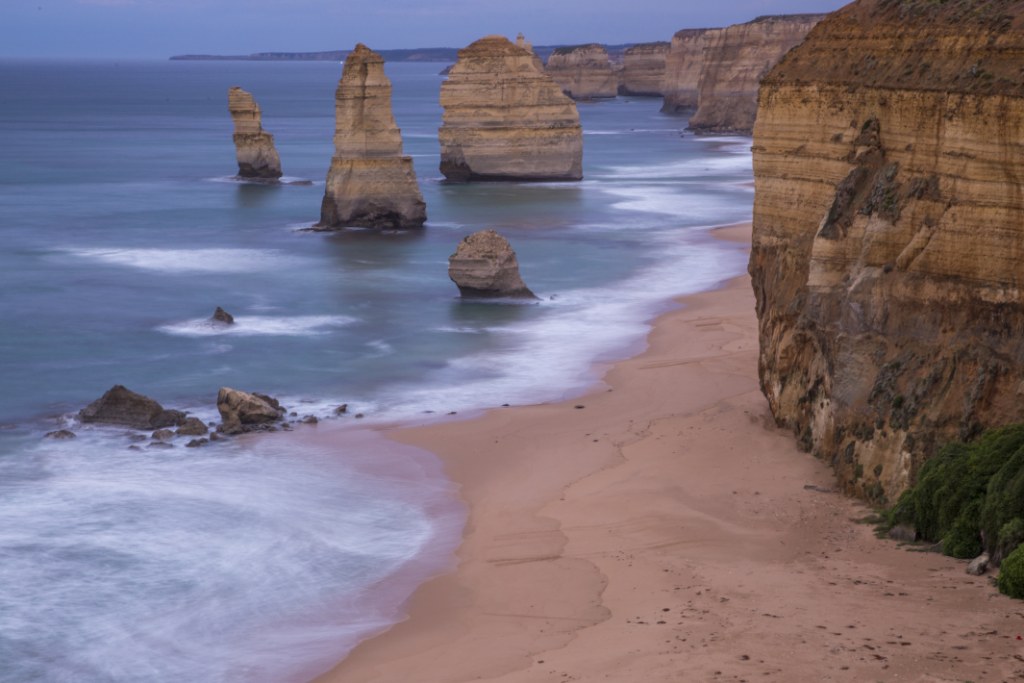 The scenery at Loch Ard is gorgeous, breathtakingly beautiful, in fact. I preferred it to the much more popular Apostles, truth be told. But, there is a tragic history linked to this remarkable site. 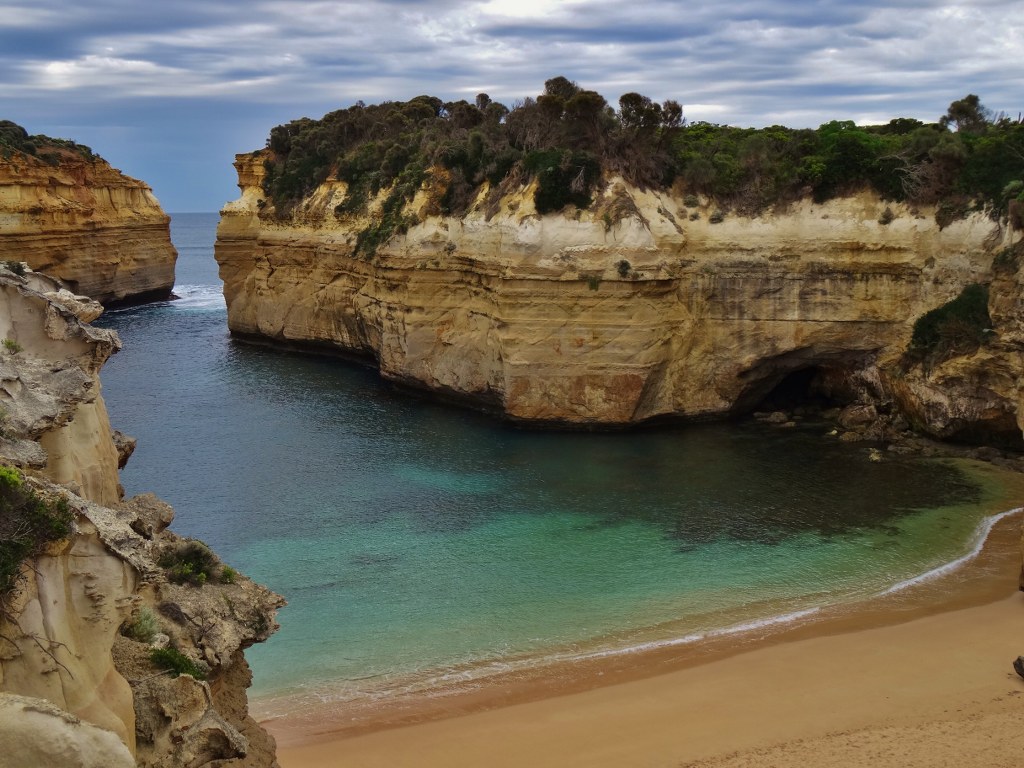 The story goes that on June 1st 1878, after a 3-month voyage from England to Melbourne, the Loch Ard smashed into a hidden reef near the cove, killing all but two of the 54 passengers and crew. Tom Pearce, a 15-year-old ship’s apprentice, and Eva Carmichael, a 17-year-old Irishwoman emigrating with her family. Ironically, they had all attended a “Land Ho!” party aboard ship the night before, to celebrate their imminent and long awaited arrival in Australia. Heavy fog and navigational miscalculations led the ship’s captain to believe they were still some 50 miles from the rocks and reefs that led to their demise. 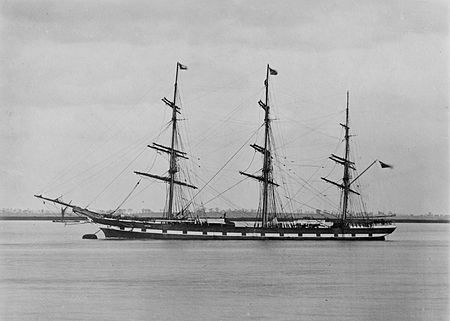 Young Tom was washed ashore, and he rescued Eva from the water after hearing her cries for help. It took an hour to locate her in the rough and foggy seas and bring her back to the sheltered beach. After sleeping off their exhaustion in a nearby cave, he climbed out of the gorge to enlist the help of local pastoralists. Which was undoubtedly a lot more challenging without the stairs that currently allow visitor access to the beach. 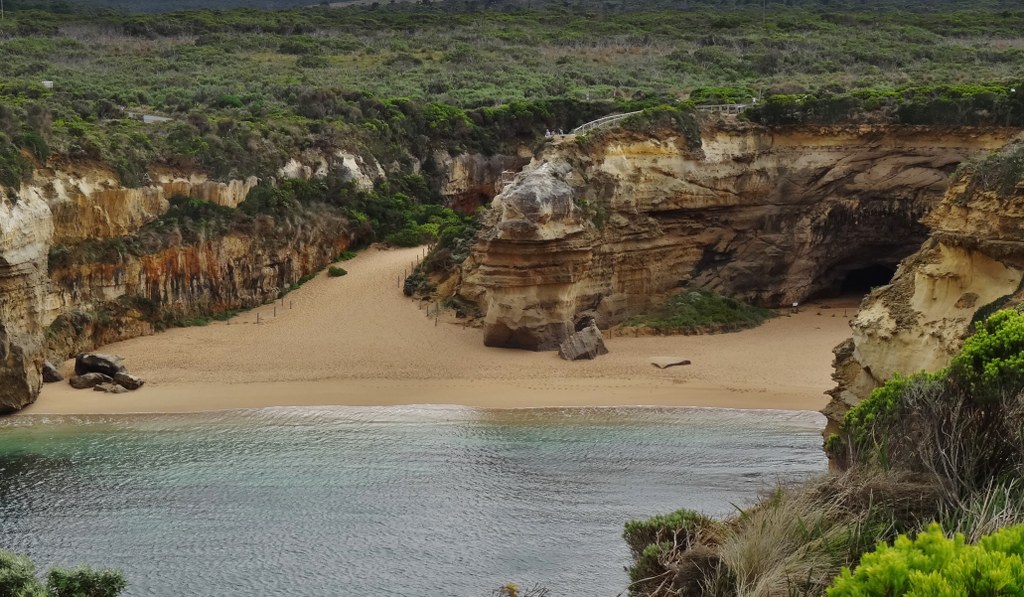 After touring the vicinity, we decided to relocate and prepare for the impending arrival of our honoured guests, my aunt Diane and uncle Kevin from the US, who were joining us at Cape Otway for a few days in late March.

We found a nice, quiet, undeveloped caravan park (a grassy paddock behind the pub) at Laver’s Hill to do an “overnighter,” make plans, do a bit of reconnaissance and mingle with the natives.

It was time well spent, as we found the perfect place to chill out for a few days, behind a small community centre in a tiny little “townlet” called Carlisle River. There was power, water, firewood and it was FREE! 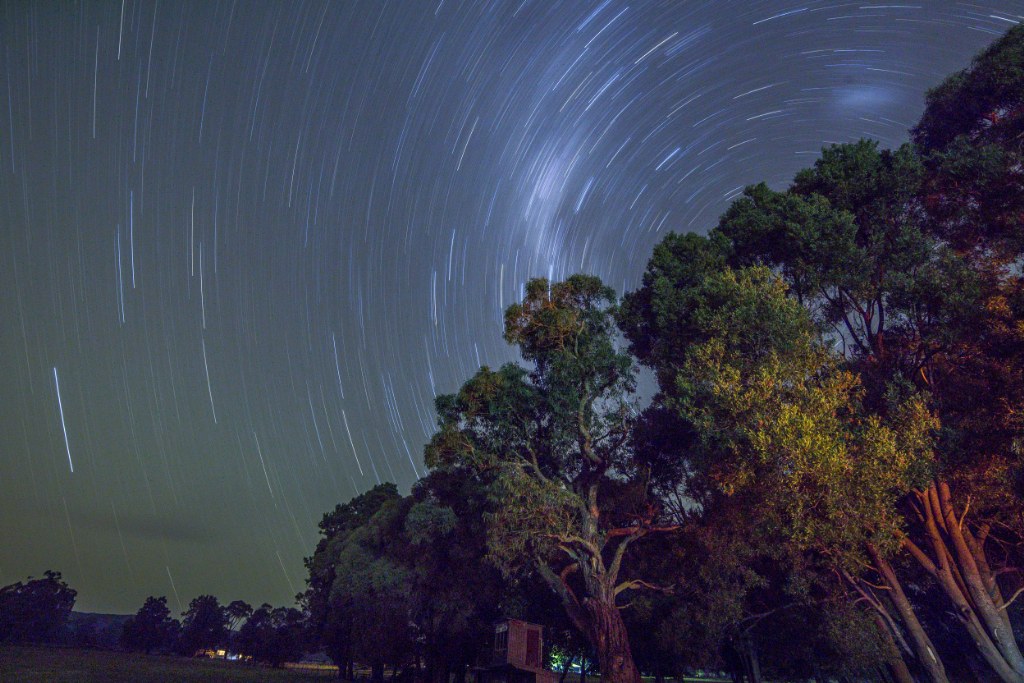 One notable expedition was to Lake Colac and the adjoining Botanical Gardens, where we wandered around amongst an amazingly extensive collection of trees and plants from around the world, taking silly pictures of each other. As you do. 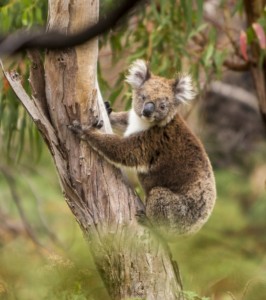 We stayed at Carlisle River for 3 nights, saving up our funds for Bimbi Park, which was the most expensive week of accommodation in six months of travelling.

The way things worked out, it was totally worth it, but more about that in the next post.