After our two week sojourn in suburbia at Alice Springs it felt great to be on the road again. We were heading into The East MacDonnell Ranges, an area that we had heard lots of great things about and were very keen to explore. It is one of the most beautiful parts of The Red Centre and amazingly still a bit of a secret. As long as you promise not to tell anyone I will try to share why we loved it so much.

To start with, it is gorgeous! Pardon the pun, but there are lots and lots of beautiful gorges to explore as you head east out of Alice.

Not far out of town we came to Emily Gap, a lovely gorge with some very unusual Aboriginal rock art 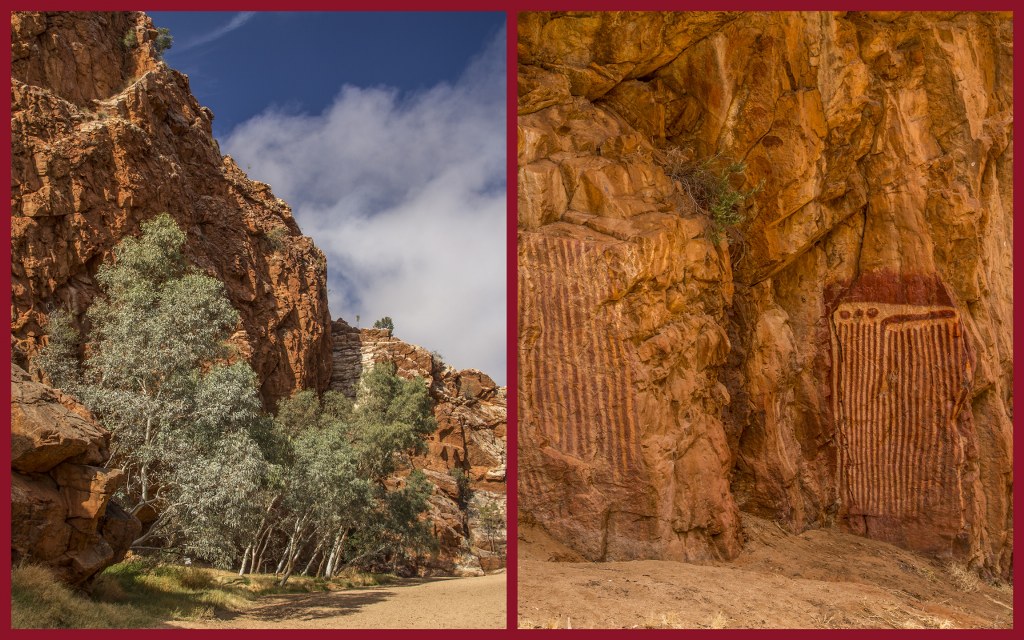 We had already left the busyness of the town behind us and were starting to relax into the special magic of this part of the country. A little bit further east and we stopped off to check out Corroberee Rock, a place of significance to the local Aboriginal people. It was not clear to us exactly what the significance was apart from it being a place for secret men’s business. While there we did a walk around the rocky outcrop. I don’t know if it was the long human connection with this place or the ancientness of the landscape, but did have a great feeling about it. 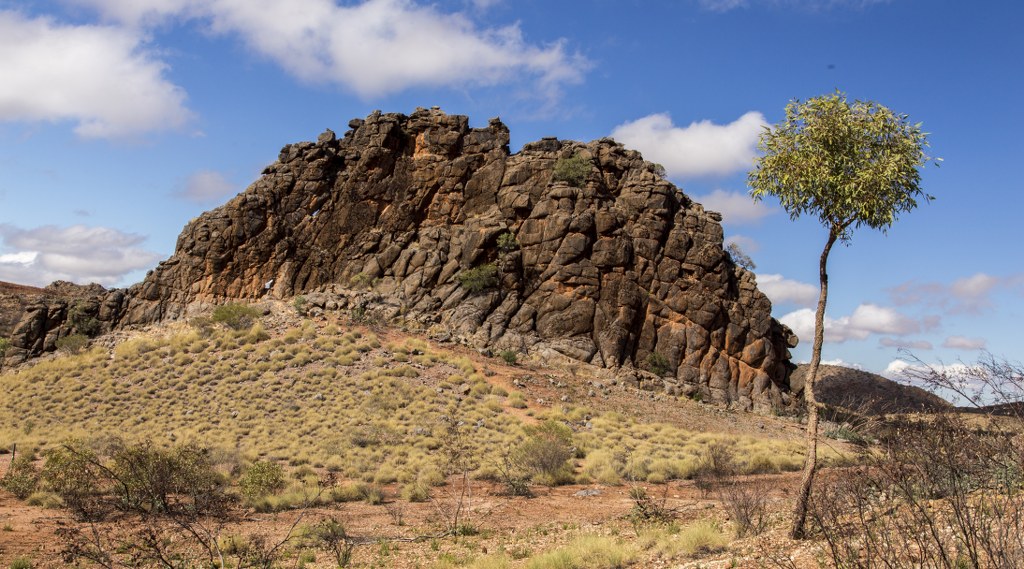 After driving east for around 70 km you come to Trephina Gorge. It is roughly 7 kms off the bitumen but is one of the nicest campgrounds we have stayed in, setup and managed by National Parks. There are four campgrounds spread throughout the gorge so visitors can usually camp with a reasonable amount of space around them. 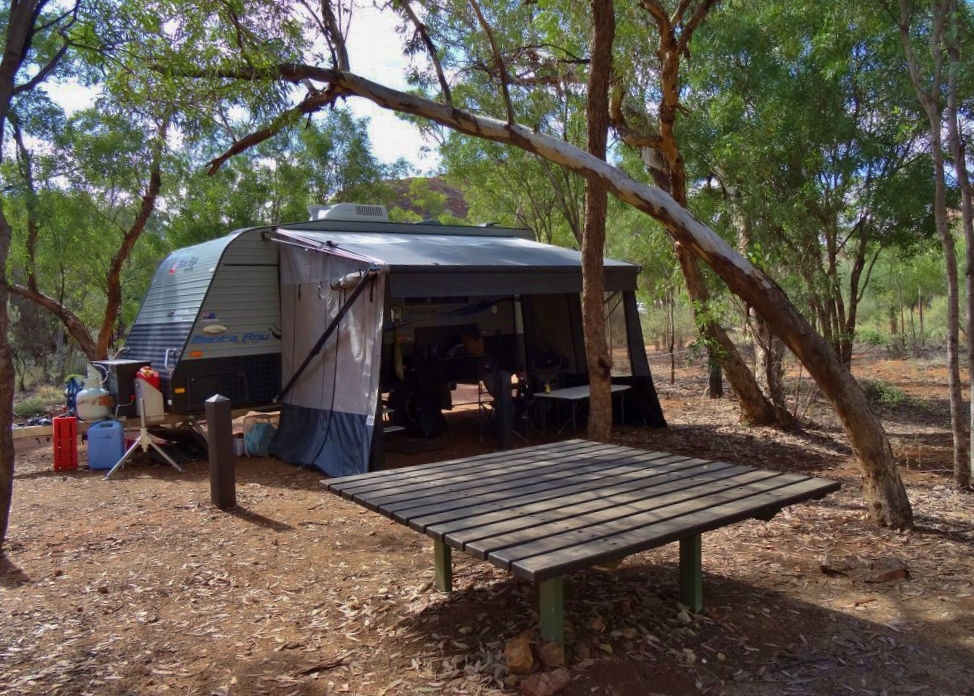 There are a number of lovely walks in, and around the gorge where you get to enjoy the landscape from different perspectives. Another wonderful thing about this country is how different it looks, depending on the time of day – sunrises and sunsets being the best time to really get to see how the light plays on the rocks and plants, painting them with rich beautiful colour. 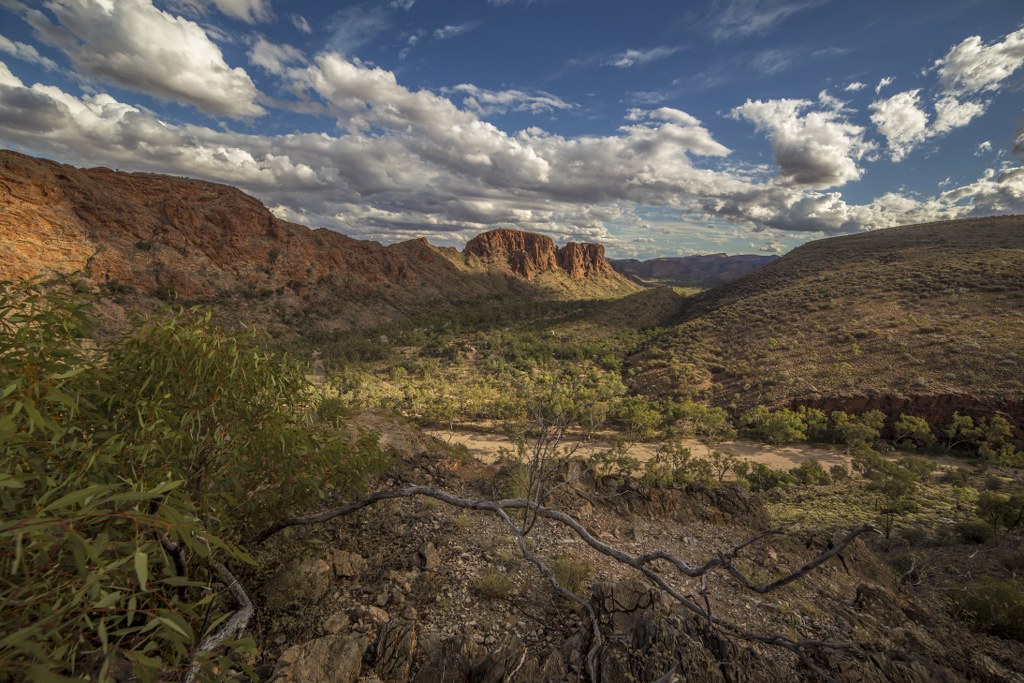 This is desert country with an annual rainfall of under 200 mm. However, while out walking one day, I was treated to a dramatic thunderstorm that briefly turned the dusty waterways to raging torrents. This was the last photo of the approaching storm that I took before putting away my camera and hightailing it back to camp to the refuge of The Wombat and Dee. 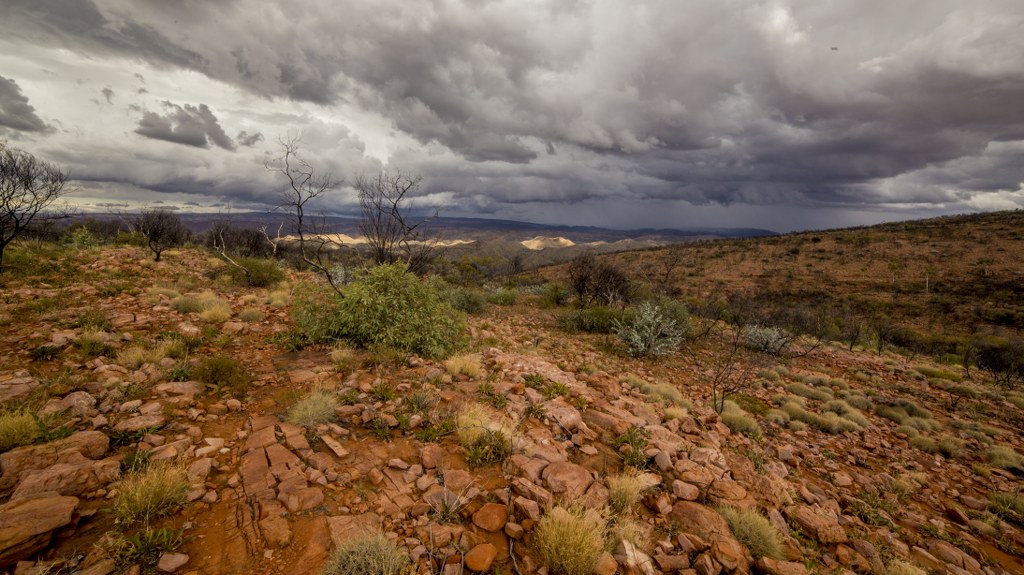 The predominant features of the East Mac’s are rocks and low grasses and shrubs. However, here and there where the conditions are just right lovely, large Ghost Gums grow. This beauty is hundreds of years old and looks great against the backdrop of rocks and blue sky 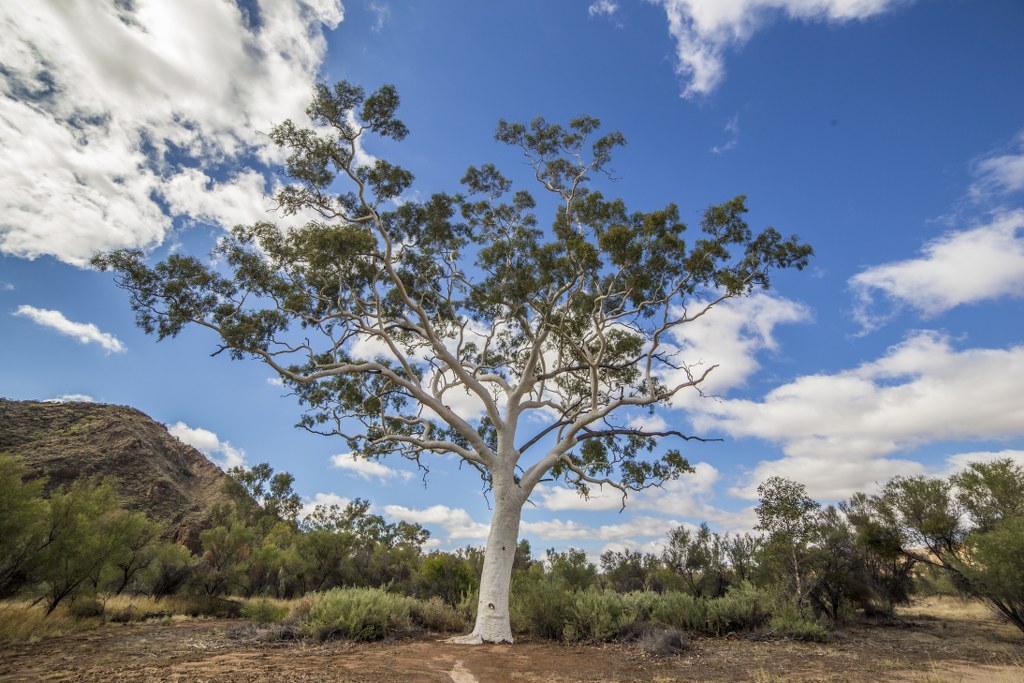 We stayed at Trephina Gorge for almost a week and used it as a base for exploring the area nearby without the restrictions of towing a caravan. About 30kms from “home” was Ross River Station, where we got to enjoy a burger, chips, beer, and internet fix before tackling the 4×4 drive to N’Dhala Gorge with its dramatic rocky outcrops.

One of the great pleasures of camping in places like this is the vast night sky with millions of stars shining brightly in the clear, cold desert air, unimpeded by any human light pollution. The gorge was just as dramatic by night as it was by day… 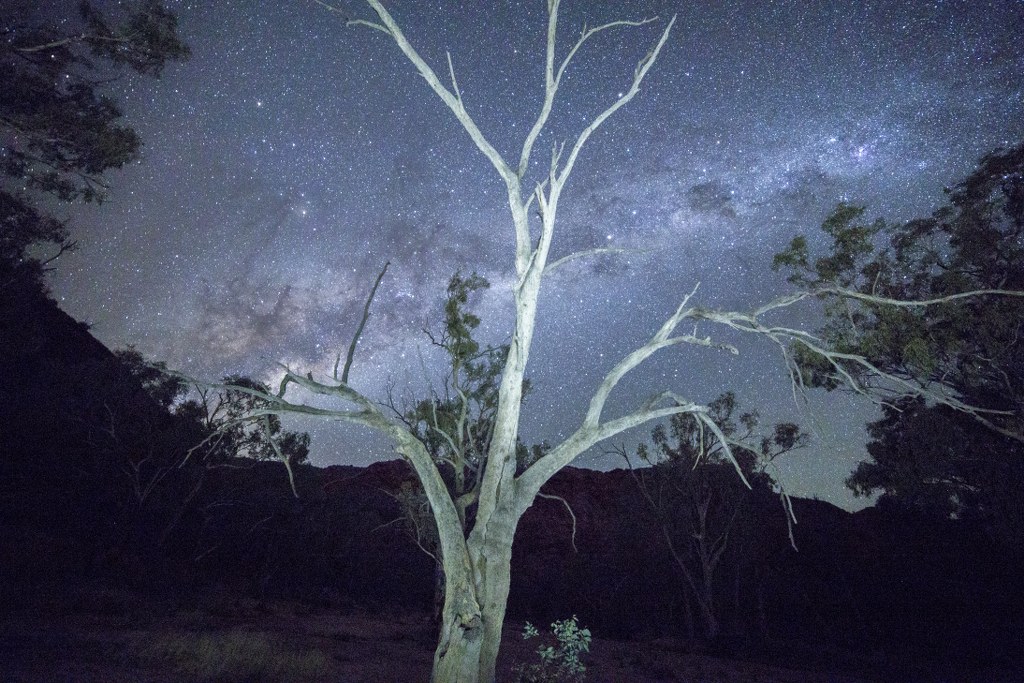 when we could drag ourselves away from the warmth of the cosy campfire. 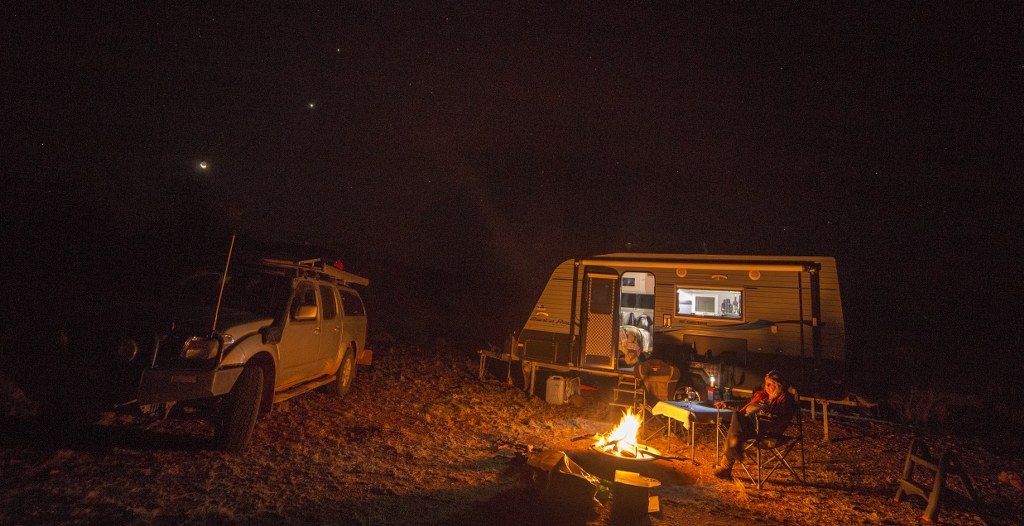 After spending the better part of a week at Trephina Gorge, there was one more place that we wanted to see before pointing the rig north and heading for The Top End – Ruby Gap. I had heard that it was one of the most spectacular places in central Australia. I had also heard that not that many people get to see it. I had also heard that it entailed a long, serious 4×4 drive to get there. Keen to check it out, but without destroying our “house”, we relocated to Arltunga Hotel (a pub with no beer) to camp and do a day trip into the gorge. 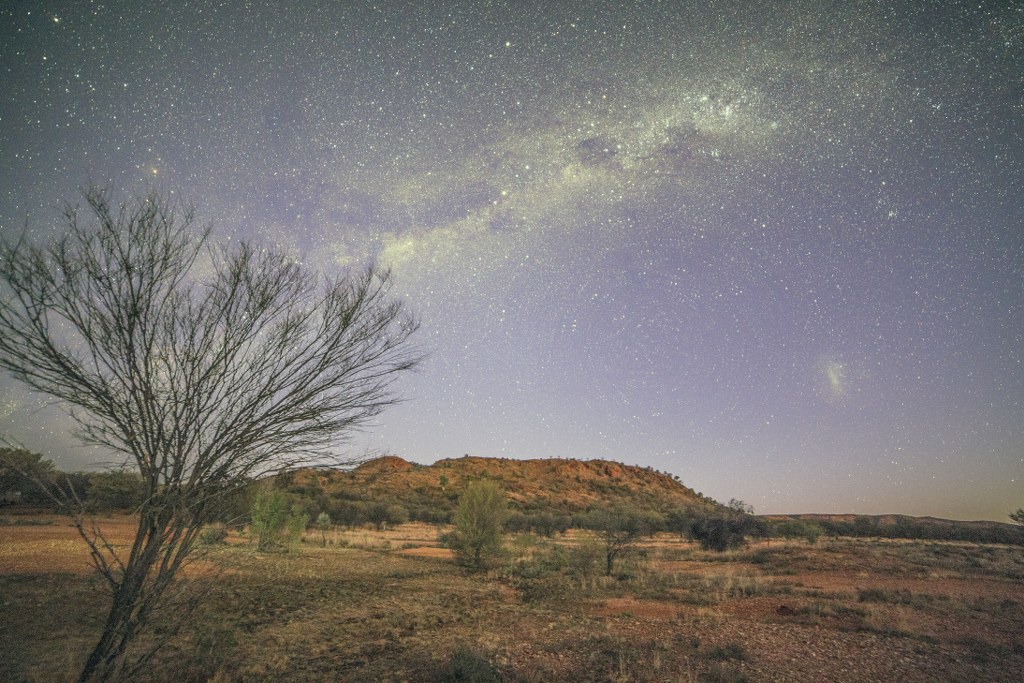 Arltunga, it turned out, was a pretty interesting place to visit itself. It was the site of the first gold rush in “The Centre” and was, for a while in the late 19th century the largest town. To get here the tough (some would say crazy) hopeful miners had to walk or ride 300 kms through the desert from the Ghan railhead at Oodnadatta. It would have been a very hard life, but they dug in and made the most of it. Like many other goldrushes in history, not many struck it rich. 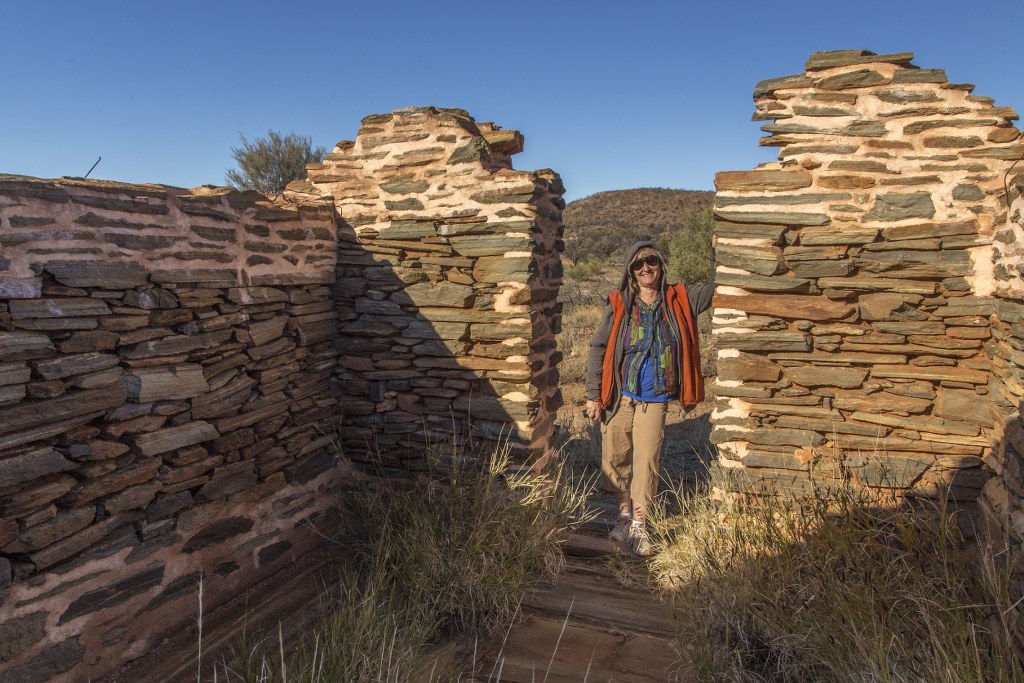 There are still lots of ruins to explore and you can even go down into some of the old mineshafts to really get a feel for what it would have been like. 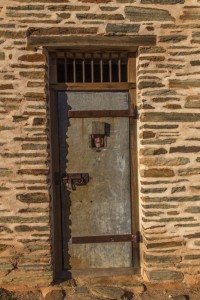 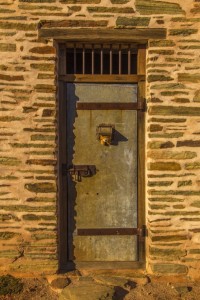 Unfortunately, both Dee and Leo Junior misbehaved while we were there and had to spend time in the slammer reflecting on their attitude.

Going to Ruby Gap turned out to be a great adventure and worth the challenging drive to get there. There is a 40 km 4×4 drive to get to the start of the Gap before a serious 5km drive along the creek bed that should only be tackled with a high clearance 4×4 vehicle. Even with Leo’s elevated stature, we hit bottom a few times navigating over and around the rocky ground. 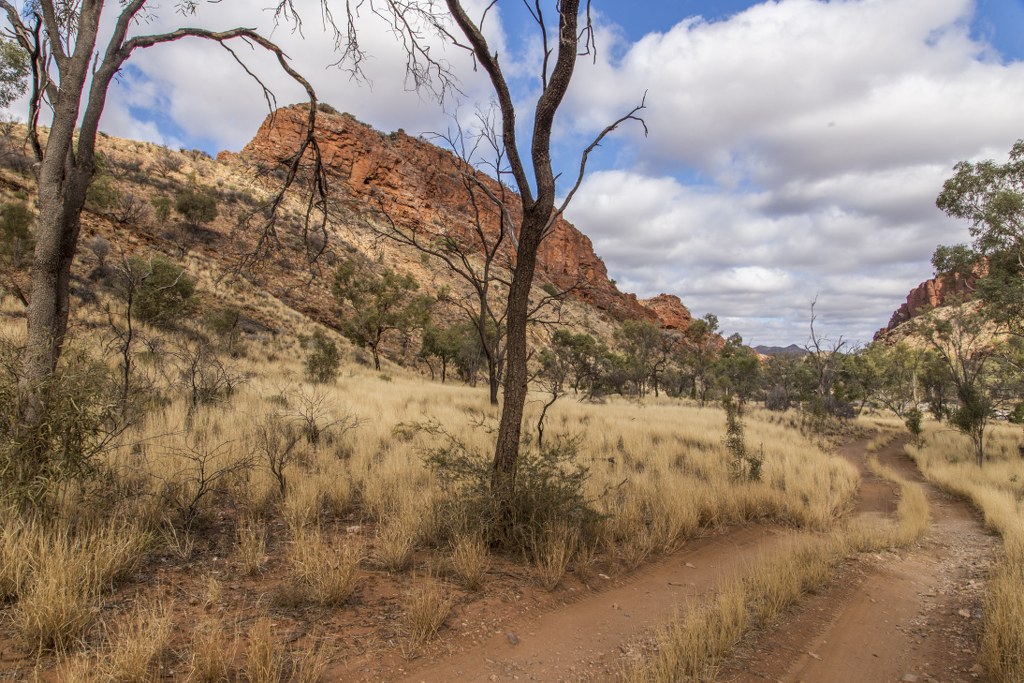 Once we arrived and looked around it all became worthwhile. 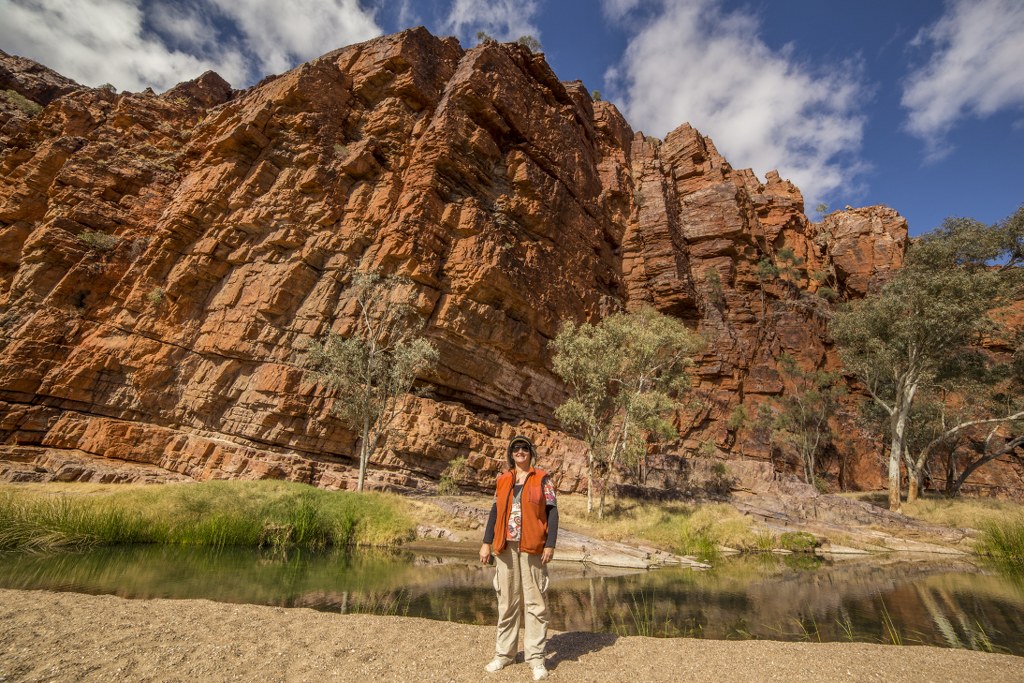 The scenery was breathtaking and there were more surprises around every corner as we walked up the creek toward Glen Annie Gorge. 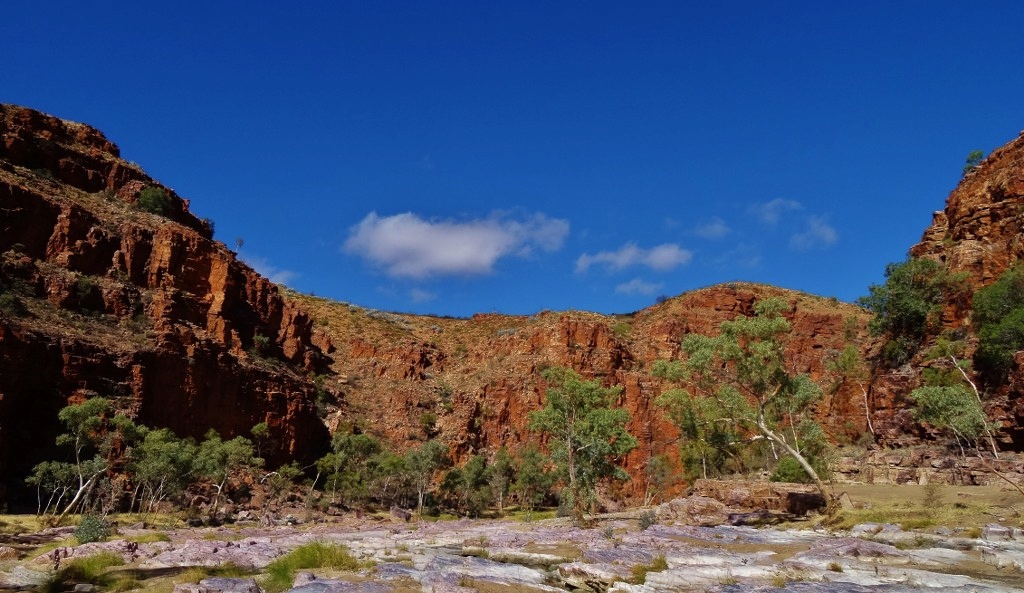 Ruby Gap was the site of the first mining rush in The Territory. Hundreds of men flocked here in the 1880’s digging up the beautiful red stones that were found here. There was good money to be made from the sale of rubies. Sadly, it was discovered after 18 months of hard work that they were not rubies at all but the much lesser valued stone garnet. Bugger!

I am sure that they left not feeling all that great about the place, but 140 years later I loved it. Even got to collect some lovely ruby red garnet stones as a souvenir! 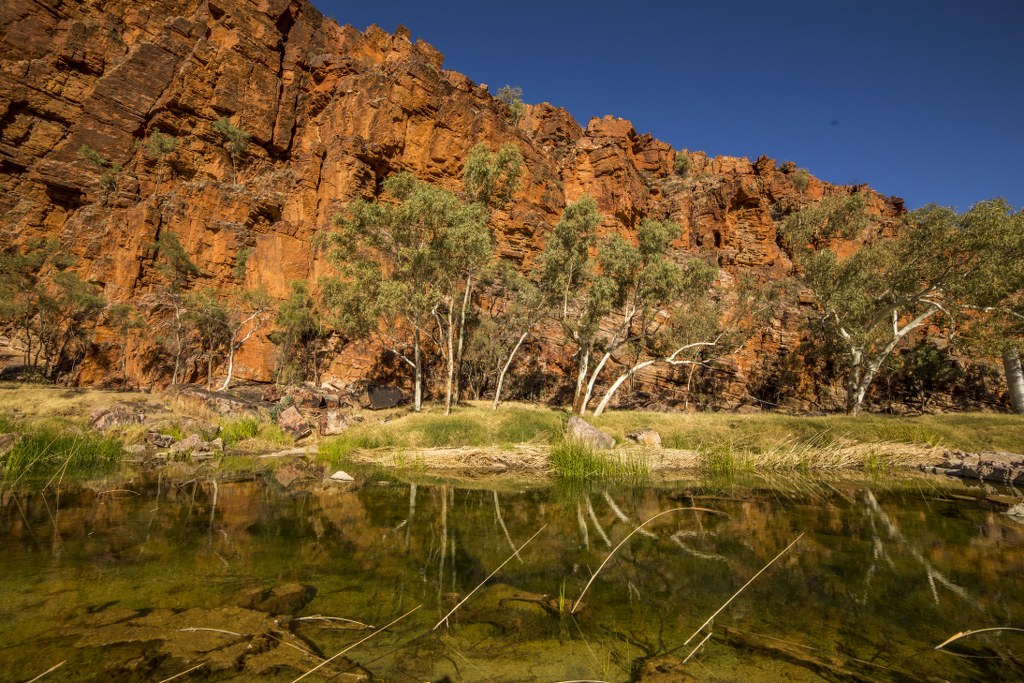 With lots of lovely memories, heaps of photos, and bulldust in and on everything in Leo and The Wombat it was time to enjoy one last tranquil camping spot near The Plenty “Highway” before re-joining The Stuart Highway and the stream of travellers heading up toward the Top End and the perennial summer weather. 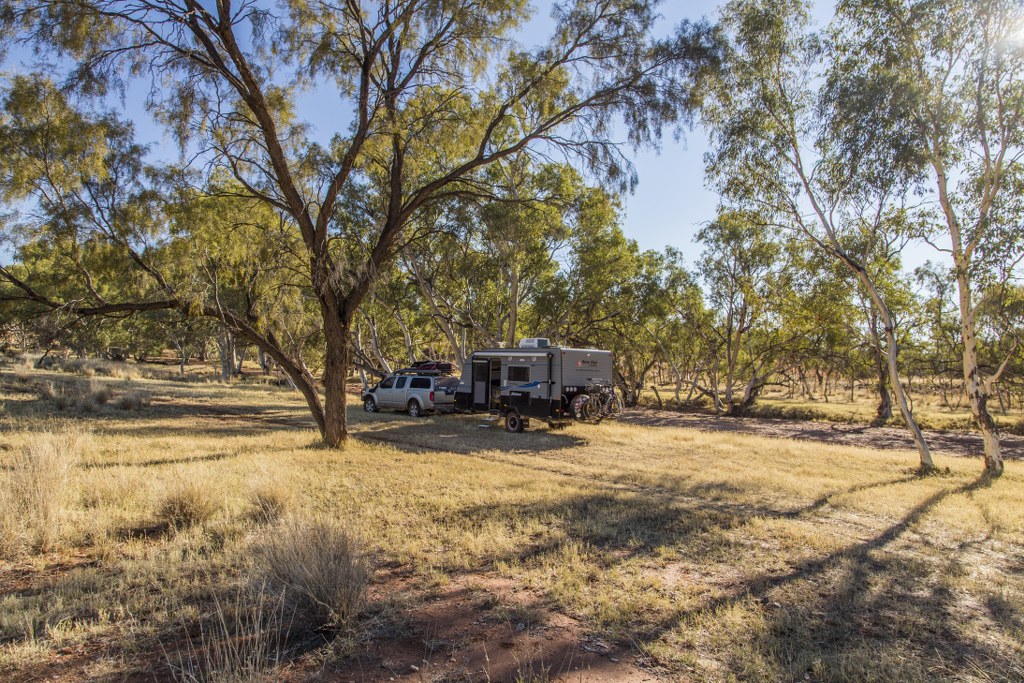