Summer was just around the corner and we had it all pretty well planned out with camphosting, housesitting, and working. An interesting and varied set of adventures to dive into.

Well, we had experienced Life in The Burbs, attended our first National Parks Camp Hosting workshop, explored a bit of the South West area and caught up with our life-on-the-road friend, Karen.

Now it was time for our very first National Parks camphosting job, at the Perth Hills Discovery Centre in Beelu National Park. 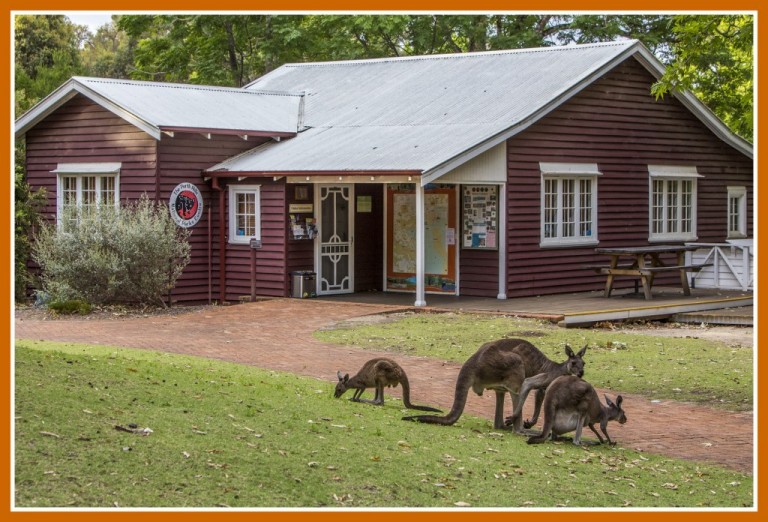 Camphosting is a volunteer activity, mainly supporting park rangers to look after campgrounds and other sites in WA’s National Parks. Hosts assist by residing in the campgrounds and attending to duties like greeting visitors, giving out information about the area, collecting fees, cleaning amenities and just “being a presence.” 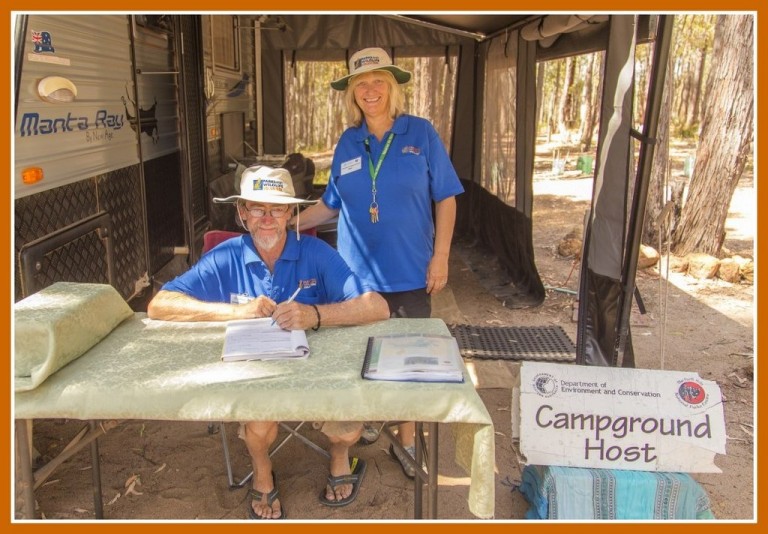 It was more like “glamp-hosting,” with power and water, hot showers and a tent-only campground aimed at youth education. It was the tail end of their busy season and a gentle introduction to the job.

We had a fantastic three weeks there, contributing to the community, meeting the inspirational staff who design and deliver the Nearer to Nature programs for kids and meeting some of the local non-human natives, too.

One of Rod’s main campground duties was tidying the pathways with a leaf-blower, especially when the wind or resident Carnaby’s Cockatoos made a big mess. I maintained the amenities and camp kitchen. Along with some extra jobs to keep us off the streets and a few outings to explore the Perth Hills area, we made good use of our time there and it went quickly. 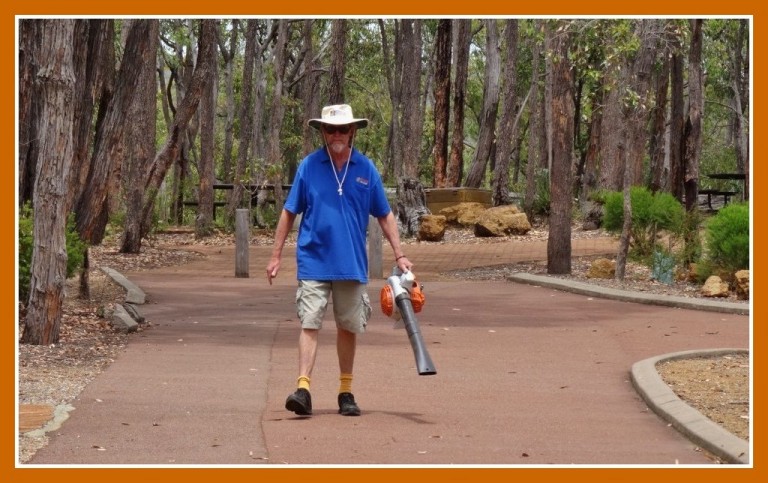 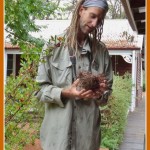 One of the highlights of our camp host job was the annual Volunteer Appreciation Day (good timing, eh?), including a walk through the forest with Simon Cherriman, the local bird nut! The drizzly weather was not entirely conducive to bird-watching, but perhaps that was a blessing in disguise.

Simon’s high-level enthusiasm is so infectious, we might still be there, listening to all the different bird calls and trying to spot teeny, tiny birds in the giant Marri trees ( Corymbia calophylla).

Alas, it was time to go, and the lovely staff thanked us again, with a morning tea, accolades and gifts. We felt very honoured. 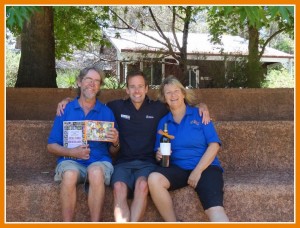 Next stop, Bullsbrook! There was a 20-acre farm, two cats and a giant poodle who needed our attention. This was where we would spend Christmas 2015 and ring in the New Year.

The house was light and airy, we had a pool and air-conditioning to cope with the heat and the animals were charming and affectionate. The owner’s parents live in an attached granny flat, so there was someone around to answer questions and lend a hand (or the occasional forgotten ingredient). 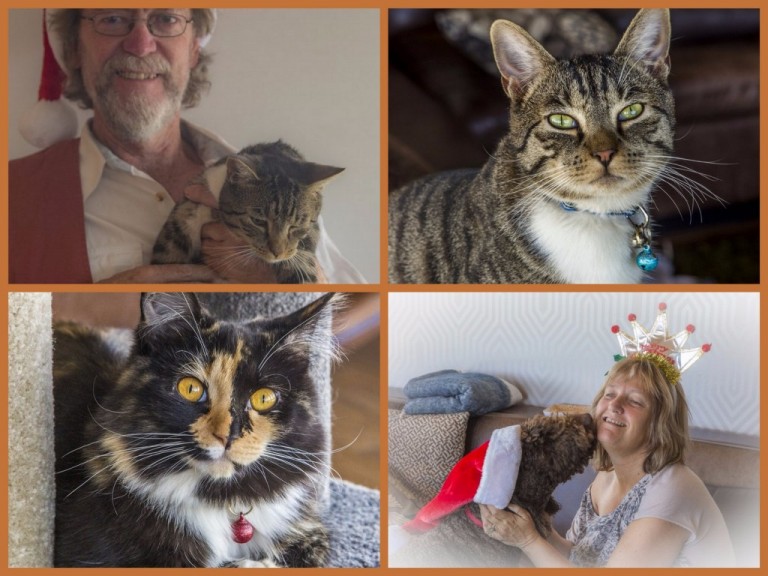 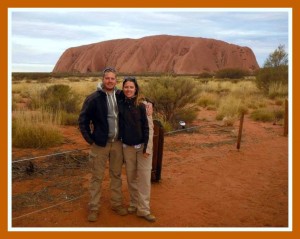 We had a great time just hanging around the house, going for some retail therapy in nearby Ellenbrook and catching up with some fellow travellers from earlier destinations.
Sue and Dan had relocated from Sydney to Perth, taking the scenic route (and six months) to get there. We had bumped into them a couple of times in random places and we really enjoyed their company, so we arranged to catch up and have a cuppa together. It was great to catch up with them.

When the Bullsbrook family came home, it was time for us to move on to our next adventure: our first paid work! Well, Rod’s paid work. We were off to Kojonup, to stay on a farm outside of town and help out a young vet performing pregnancy testing in the southwest of WA. Rod’s job was to get up at stupid o’clock and chauffeur Darren to farms all over the countryside, so he could stick it up a bunch of cows. He waved his magic wand inside thousands of bovine beauties. Rod was glad to stay in the driver’s seat.

We were ‘camped’ next to the homestead veggie garden, resident turkeys, guinea fowl, peacocks and chooks, and just up the drive from the goats and herds of deer. The human contingent consisted of Darren the vet, his very hard-working wife and two incredibly adorable little girls. I was instantly smitten.

We were treated like old friends, hooked up with power and water and supplied with heaps of venison, fresh veggies, eggs and goat’s milk. We did our best to repay their kindness by being model employees. 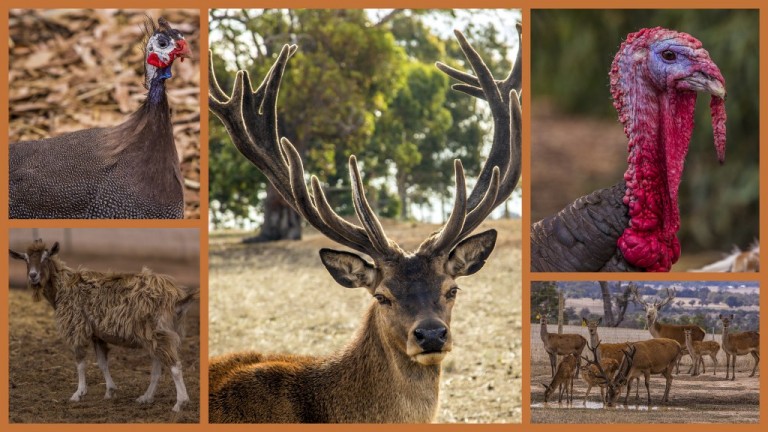 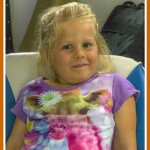 Rod was very conscientious, usually getting up when it was still dark, ready for a big day of driving. Besides supporting him with food preparation and sympathy, I had many, many visitations from the beautiful 5-yr-old Ruby, who came over to the caravan to chat, colour in and just have a break from her handful of a baby sister. She and I had some great conversations, and I still miss her company.

Even though they had a holiday house in Bremer Bay on the south coast, the family had very few opportunities to get away together, with the demands of business and farm duties. So when we offered to take over the milking and look after the house, they jumped at the chance. Suddenly, we were in charge! 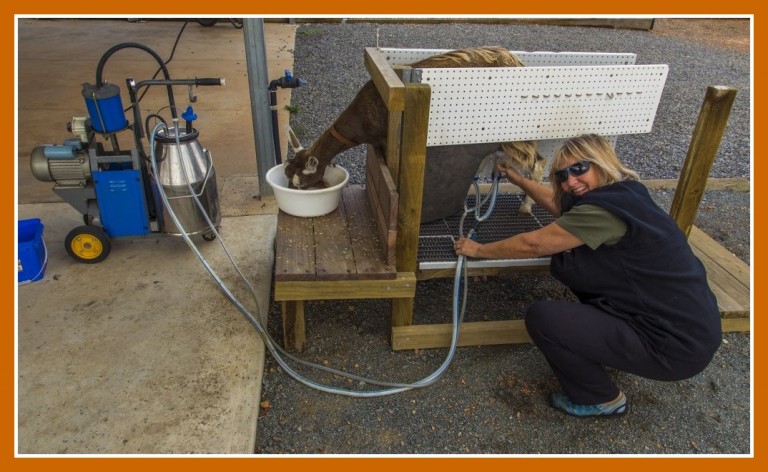 It was doubly delightful to know that we could give these guys a well-deserved break. The biggest perk was their offer to stay in their place in Bremer Bay once we headed off from “Kojie.” 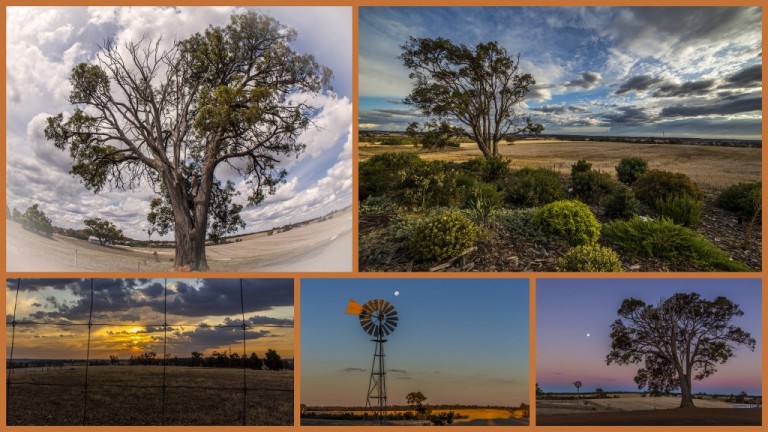 If you would like to receive email notifications when we publish a new Blog Post you can by filling in this form.