Here we are, one more day to go before we head to Tasmania, a first for Ebb, Flow, Leo and the Wombat! I thought it must be time to fill you in on what we’ve been up to.
Firstly, before you ask, we have now travelled just over 6000 k’s.

In my last post, I mentioned that we planned to go to Barmah Lake. We needed to be close to the town of Echuca, to get some repairs done on the Wombat (and one of my molars) and Barmah Lake turned out to be a very good choice of venue indeed.
We had a great time camped at the lake, of course you know we got the best campsite (Ebb has an instinct). Directly across the lake from us, the Murray River flowed in, creating a grassy swamp at our doorstep. The frogs were so loud, I gave up on our customary after-dinner music.

We had one full day there, and we made the most of it. In the morning, we went paddling around the shallow lake, in amongst the reeds and water plants. There were lots of birds, but unfortunately they were not too people-friendly, so we weren’t really able to get up close and personal.

We had also gotten some info in town (from Stuey at the Barmah shop) on where to go if we wanted to spot some Brumbies. So off we went in Leo, sight-seeing and Brumby-spotting. And we saw some! They were even warier than the water birds, so we couldn’t get a photo, but we were close enough to be challenged by the Leader of the Pack.

We would have stayed another couple of days there but we decided to move on, to find a quiet place to hide out during the very busy 4-day Melbourne Cup weekend. In Victoria, they take their big horsey race very seriously, with a public holiday on the Tuesday and a sickie on the Monday. You know what they do then? They go camping.

While the Wombat was getting a check-up, we had a lovely day in Echuca. It’s a likeable town, with an iconic port and a very nice tourist sector. It probably also holds the record for the largest number of luxury houseboats you can view from one spot.

After we collected our little house, we did manage to find a sweet little hidey-hole on the Edward River. Apart from me nearly having kittens getting into the site (ONE INCH to spare coming around that tree, Ebb!), it was a beautiful spot, protected from the strong winds, and luckily with pretty well-behaved neighbours. Good thing, too, as we spent 5 nights there waiting for the silly horse race to be over.

We made the most of our time there, seeing all the sights, including the amazing Gulpa Creek Reed Beds Bird Hide near Mathoura. Fabulous facility, including these gorgeous spinning tiles with a picture, a third-birdperson narrative and an audible Audubon song for each of the species in the adjoining reed bed. The displays inside the hide were equally charming, consisting of emails, letters, tweets and Facebook posts from one bird to another. It was adorable, maybe a bit twee (t).

On Melbourne Cup Day, we made our move and got out of there.
Then we found Paradise! If you’re wondering, it’s on the Murray River near Cobram. Sandy beach, secluded spot and our own remarkable camp mascots.
Rainbow Bee-eaters look like they have been drawn by Disney. I was so enchanted by these adorable creatures, they even fly like cartoon birds! I don’t like to play favourites, but these guys are like no other bird I have ever seen.

Where can you go after you’ve been to paradise? Myrtleford, of course! We spent a lovely couple of days at our first proper caravan park of the trip, exploring the “gourmet region” and swimming in the Ovens river. This is wine-producing, cheese-making, olive-growing country. It is “foodie” heaven, we even visited a mustard shop! (Yes, a whole shop that just sold mustard.)

If you ever find yourself in Myrtleford, make sure you check out Café Fez, which is also the home of Red Ramia Trading company. I could have spent days exploring the astounding variety of “stuff” from China, India, Morocco and Japan. Fantastic coffee to boot!

After a couple days we had to get back to nature, somewhere where I couldn’t spend any money. The base of Mt Bogong seemed to be the ideal place.
I think at this point, it is worth mentioning the Bogong Moth and its historical significance to the area. 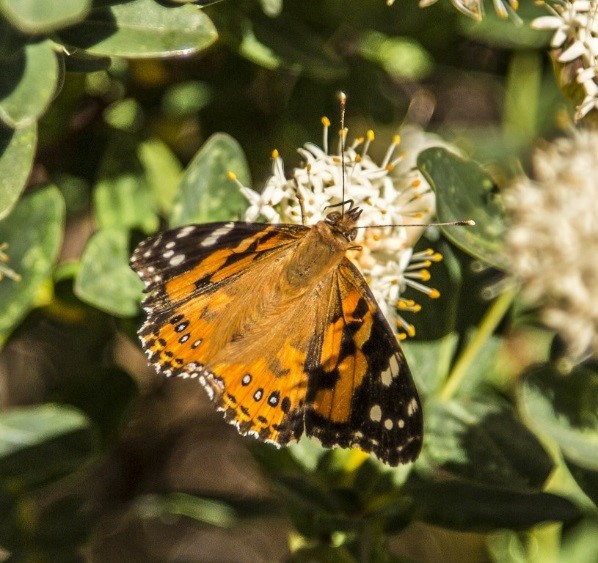 Bogong moths breed on the flatlands but to escape the summer heat they migrate to the higher country of the Australian Alps.
From 1,071 years ago (give or take), the Bogong moths provided a rich food source for Indigenous people of the area as well as those that came from afar to celebrate the bounty. During their summer migration, the moths would be hunted or collected as they rested in rock crevices or caves. They were then cooked in sand and hot ashes to remove wings and legs and made into moth cakes. Huge Bogong Moth feasts occurred when various tribes came together to share moth recipes. There is still a Bogong Moth Festival called Ngan Girra, on the last Saturday of November to celebrate this ancient celebration and feast.

No, I did not try moth in any form.

We didn’t buy anything else camped at Mountain Creek, but we did have some adventures. One day was 4 Wheel Driving day, where Rod tried repeatedly to make me wet myself on a “little picnic up in the mountains.” To be fair, it was one of those situations where, by the time you recognize how far in over your head you are, there is no turning back. It was thrilling, exhilarating and extremely stupid. We should not have done it on our own. We should have joined up with
some experienced people who had the intelligence to talk us into going to the pub instead.

The next day, Rod decided to do a bit of a bushwalk up the “Big Fella.” Peaking at 2000 metres, Mt Bogong is the highest mountain in Victoria. And damned if he didn’t make it all the way to the top! Ten k’s of UP, then…you get the picture. (He said down was way worse.) Of course, by the time he staggered back to camp, he had been hiking for 10 hours in the hot sun and was pretty wiped out.

Me? I had a nice relaxing “home day.” Played some music, paddled in the creek and did some arty farty stuff with moss.

On our way up to the mountains, we stopped in Mount Beauty, and we were very taken by the town, the shops, the people and the ambience. We are always on the alert for potential places to land one day, and Mt Beauty made the list.
Then we headed for the Bogong High plains in the Victorian Alps. What a breathtaking fairyland of wildflowers, snow gums and spectacular scenery in every direction!

I snapped hundreds of photos in between swooning and pinching myself. There were plenty of campgrounds to choose from, and the whole area was practically deserted! We ended up at Buckety Plains campground and had it to ourselves. We spent four glorious days driving, hiking and cozying up in the Wombat on our first proper rainy day.

In every direction, as far as we could see, the slopes and valleys were covered in ghostly snow gum skeletons from the devastating 2003 fires. After almost 12 years, the new growth from the base of the dead trees has reached only 3 metres, about half the original height. It was striking, eerie and very photogenic.

Some of the main highlights in the high country are the historic huts, left over from the days when drovers brought livestock up into the mountains for grazing in summer. The huts are often the crux of formal hiking tracks and available as emergency accommodation for hikers during snow season. A number of them were lost during the 2003 bush fires, some of which have since been rebuilt.

After leaving the high country, our plan had been to spend some time on the Victorian coast before catching our ship to Tassie. But we were having such a wonderful time in the mountains, we decided to stay high, and headed over to the Snowys in NSW.
Camped at 3-mile dam, right out on a peninsula, we spent a wonderful few days up in the Snowy Mountains.

Rod got up close and personal with some Brumbies (wild horses), we saw a platypus wake right in front of our campsite and we were serenaded at night by Pobblebonk frogs, which sound like toy banjos being played by a group of 2-yr-olds.

But our most spectacular endeavour was the Yarrangabilly Caves. It was one of the greatest experiences of my life. We chose to do one guided tour and one self-guided tour. There are only 3 caves open to the public, we had the privilege of being guided through the Jersey Cave by Regina, who took us and another couple on a magical journey that lasted about 90 minutes. It was mind-blowing, seeing all the cave “decorations” like stalagmites and stalactites, shawls, crystals and more.

The Jersey cave is over a million years old, while the South Glory cave, which we went through without a guide, was only a young thing at 100,000 years. They were very different caves, but both well worth the entry fee.

As if the caves weren’t enough, there was also a thermal pool, heated to 27 degrees by a natural spring, year round. I even got Rod to go swimming with me! 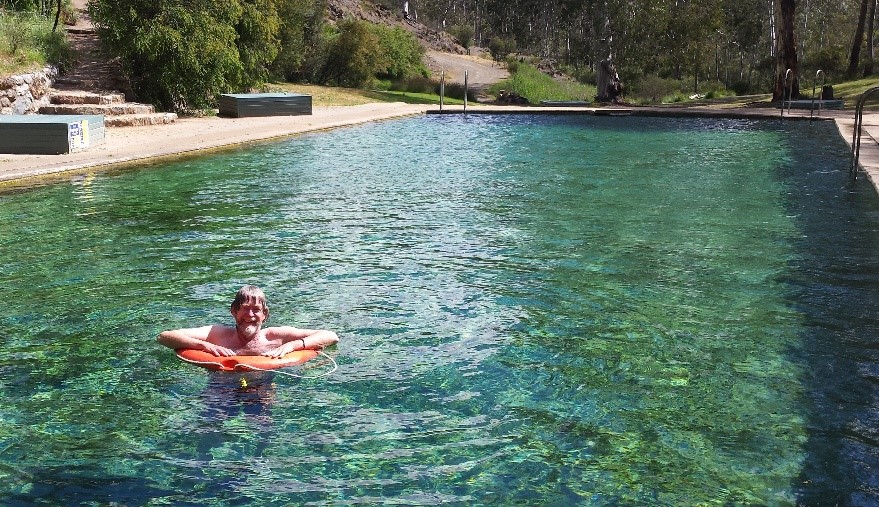 As we prepare to depart from this very tasty campsite and leave the mountains behind for now, we have hundreds of fond memories to look back on.
And some very exciting times to look forward to! A week swanning about on the coast and then we are bound for Tassie! Make sure to browse through the rest of the pics on https://picasaweb.google.com/DianeFlow.