We had just spent over five weeks in The Kimberley travelling from The NT border to Broome. We had seen some magical country, made some good friends, and taken a ridiculous number of photos of boabs! It was time to head south and see what there was to see in The Pilbara.

After driving south for hundreds of kms through flat, semi-desert, somewhat boring country from Broome, all of a sudden the first hills and mountains of the Pilbara came into view. Leaving the plains and the security of the bitumen behind, we headed off down a dusty little track that we hoped would lead us to Marble Bar. It is often hard to tell by looking at a line on a map what the road conditions will be, but on this occasion it was a great decision. 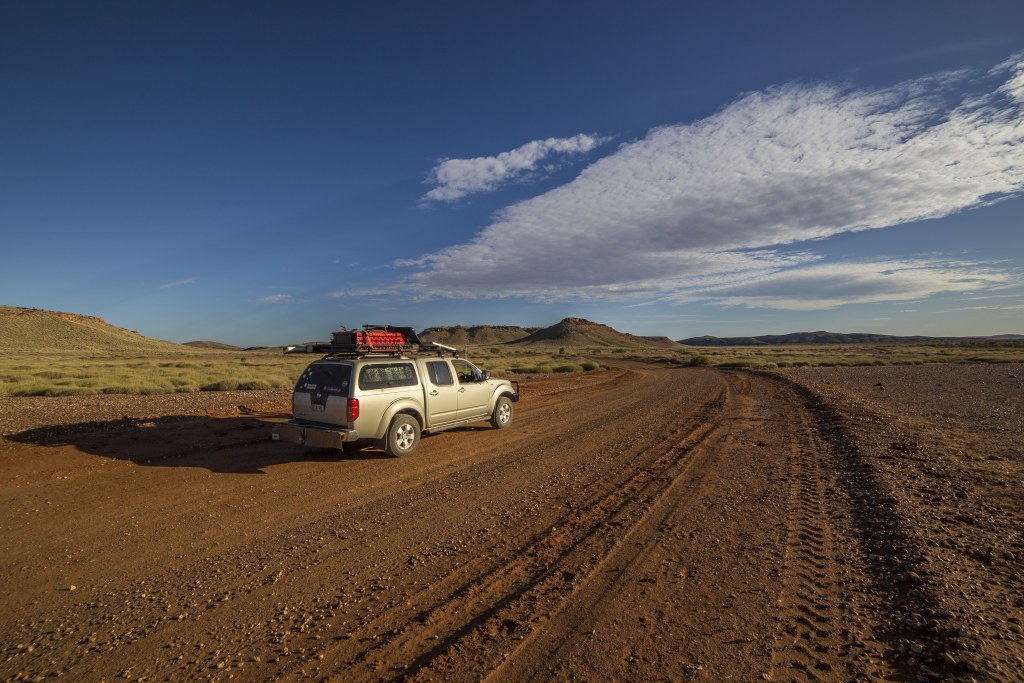 Beautiful view, good road, and no other vehicles seen for over 100kms. We even got to see our first wild camel! 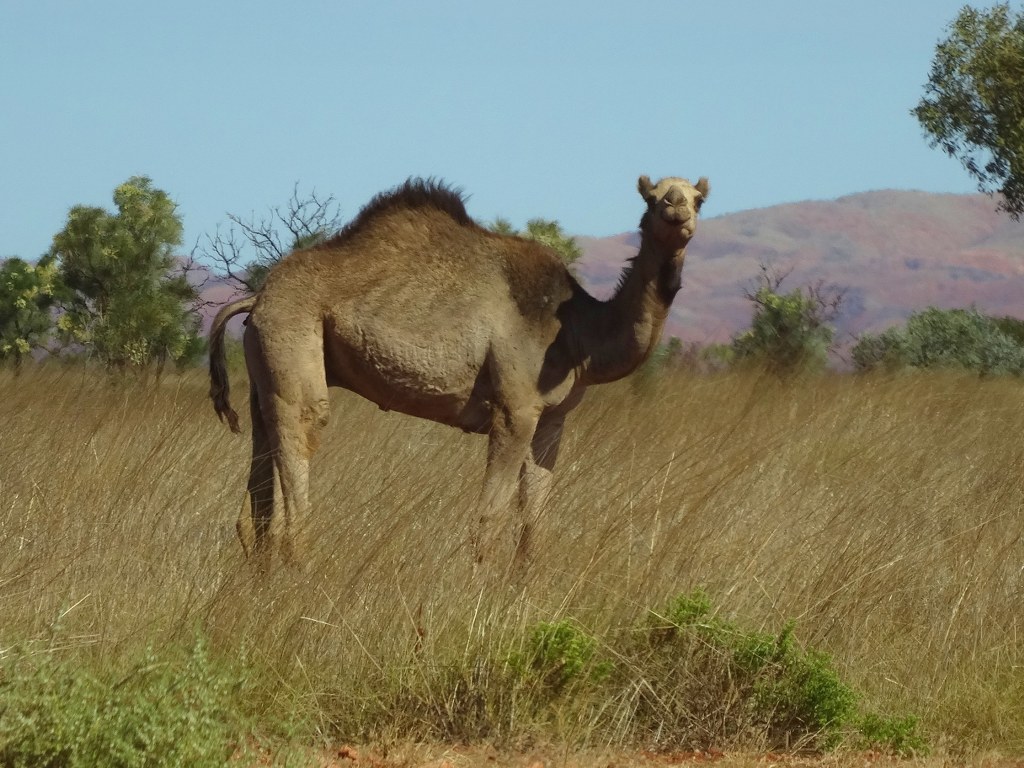 I had always wanted to go to Marble Bar. During summer it is often in the news as having the hottest temperatures in Australia. It holds the dubious record of having 160 consecutive days there the maximum daytime temp never dropped below 38 degrees Celsius.

My beloved travelling companion Dee is a tough, resilient camper. She will cope with just about any challenge that the road has to offer. However she does not cope very well with the heat. She had struggled throughout the Top End and The Kimberley with the weather, and now I was taking her to the hottest place in Australia! I must need my head examined! 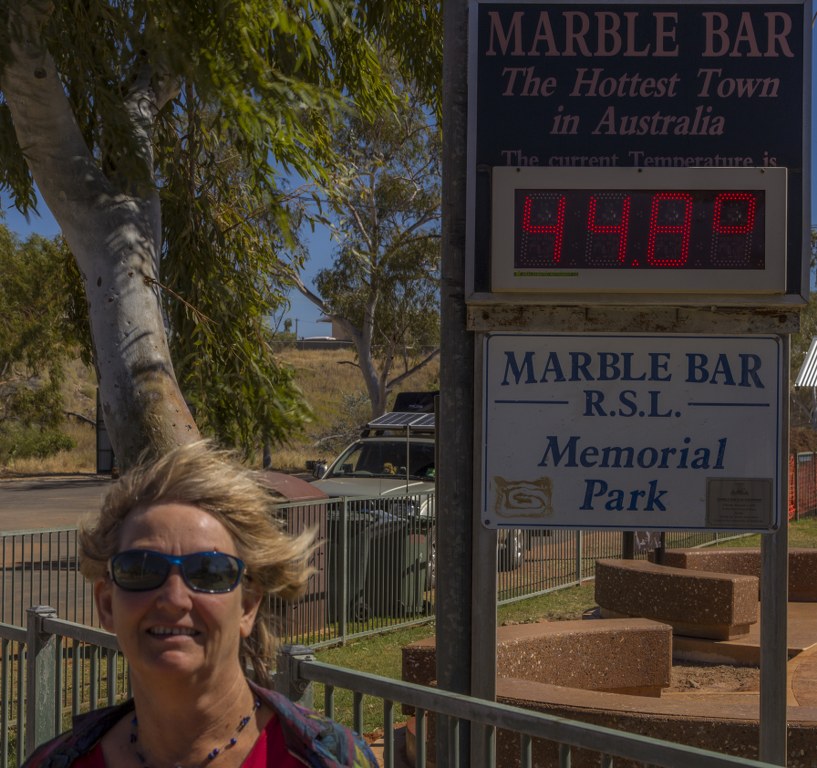 Luckily for us (and especially me) the temperature didn’t get above the low 30’s while we were there. It is not, however, on our short list of places to settle down in when we finally get sick of traveling.

Marble Bar is named after the lovely coloured rocky outcrop in the river just out of town where you can go to cool down from the almost relentless heat. 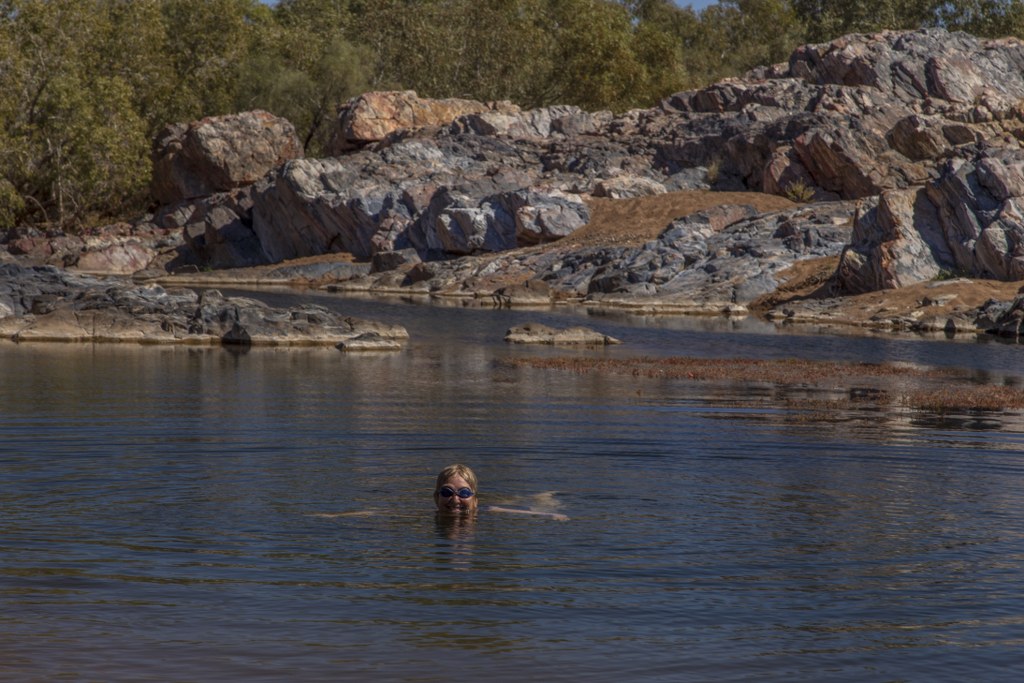 However, well after the town had been named it was discovered that the bar consisted mostly of Jasper, so the town really should really be called Jasper Bar. 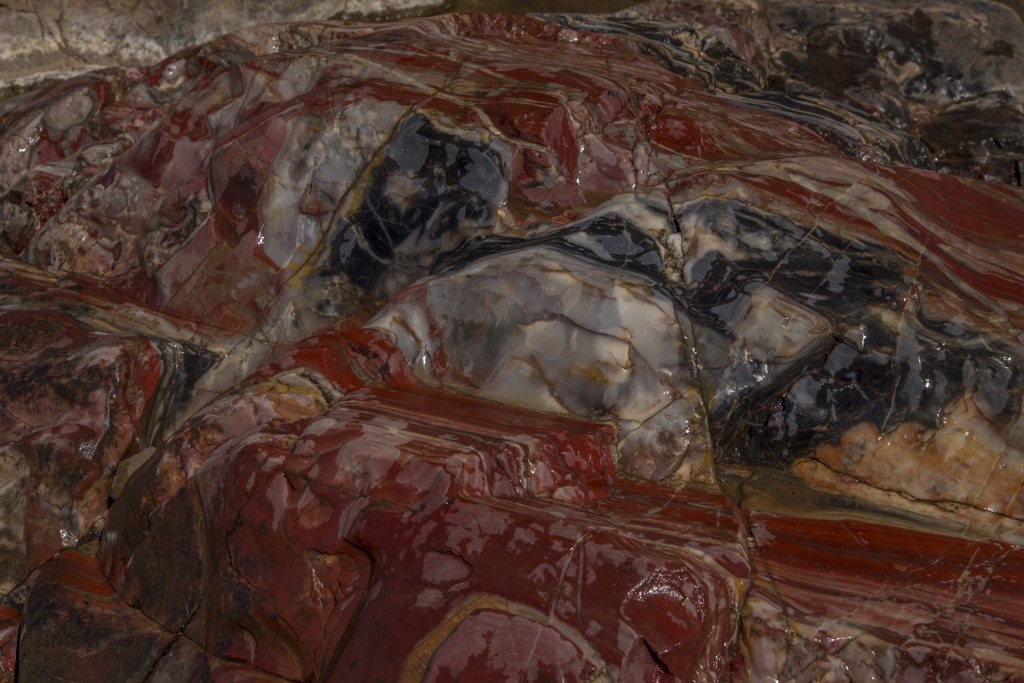 The scenery around Marble Bar is breathtaking. We were lucky to be there at the right time of year for the stunning wildflower blooming. The flowers, spinifex, and snappy gums scattered amongst the red rock hills and blue blue sky was mind-blowing. It was like Mother Nature had turned the saturation of the landscape to “surreal” setting. 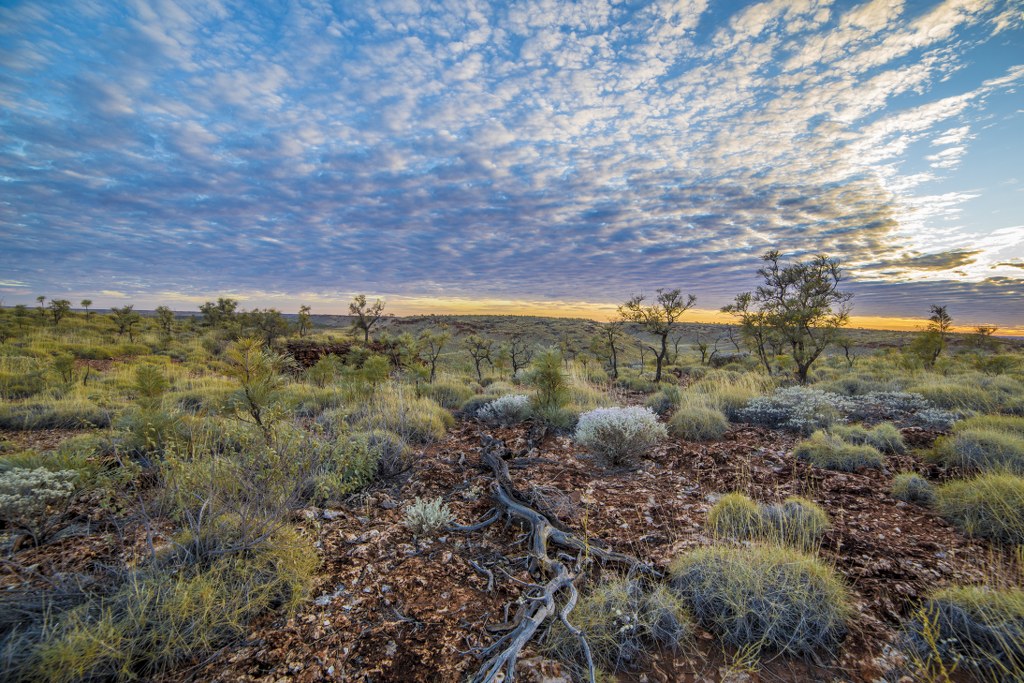 Before heading south through the heart of The Pilbara to the mining town of Newman we decided to take a little 300 km detour along a dusty, but spectacular, road to check out a place that we had been told about, Carawine Gorge. We were very glad we did. Lovely scenery and beautiful, free campsite by the river. 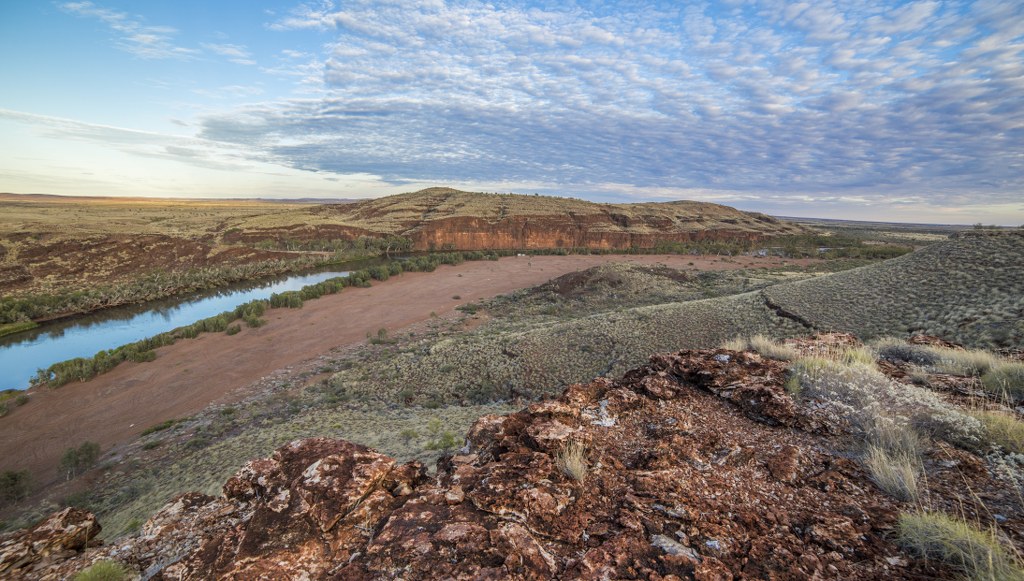 We ended up spending four nights there doing lots of walks and drives. It was so inspiring a spot for photography and I dragged myself out of bed each morning we were there in the dark so that I could be on top of a mountain by the time the sun made its appearance. 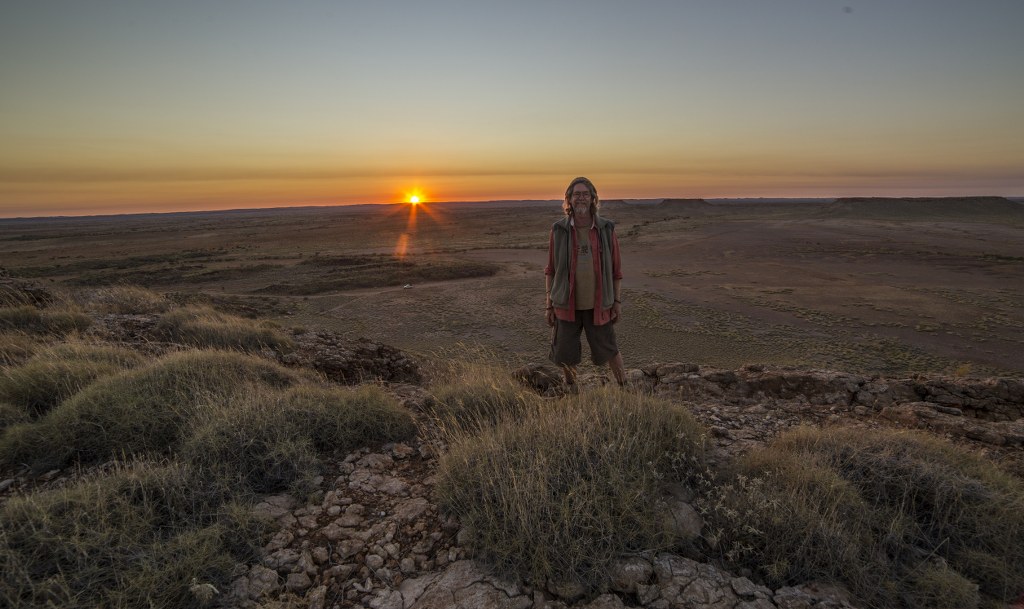 It was truly magical looking out over the vast, ancient landscape as is slowly changed colour and another day began. 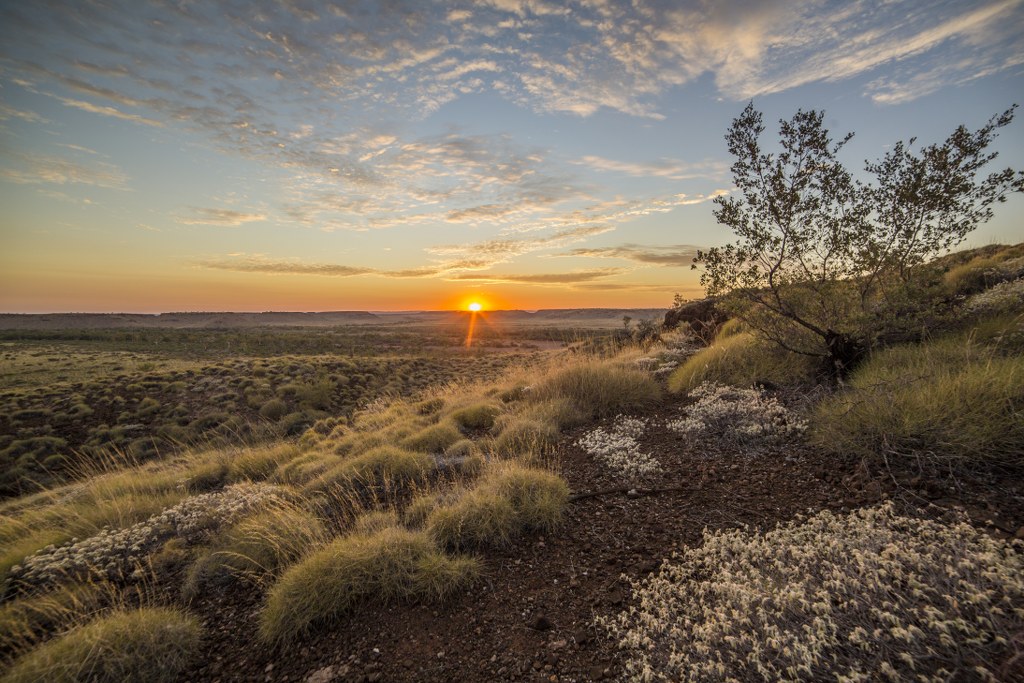 What a difference it was to go from there to Newman, the mining support town for BHP Billiton’s Mt Whaleback Mine, the largest open cut mine in the world. The mountain is just about pure iron ore and is slowly being, blown up, dug up, put into 3km long trains and carried first to Port Headland and then around the world to feed the insatiable need for steel. 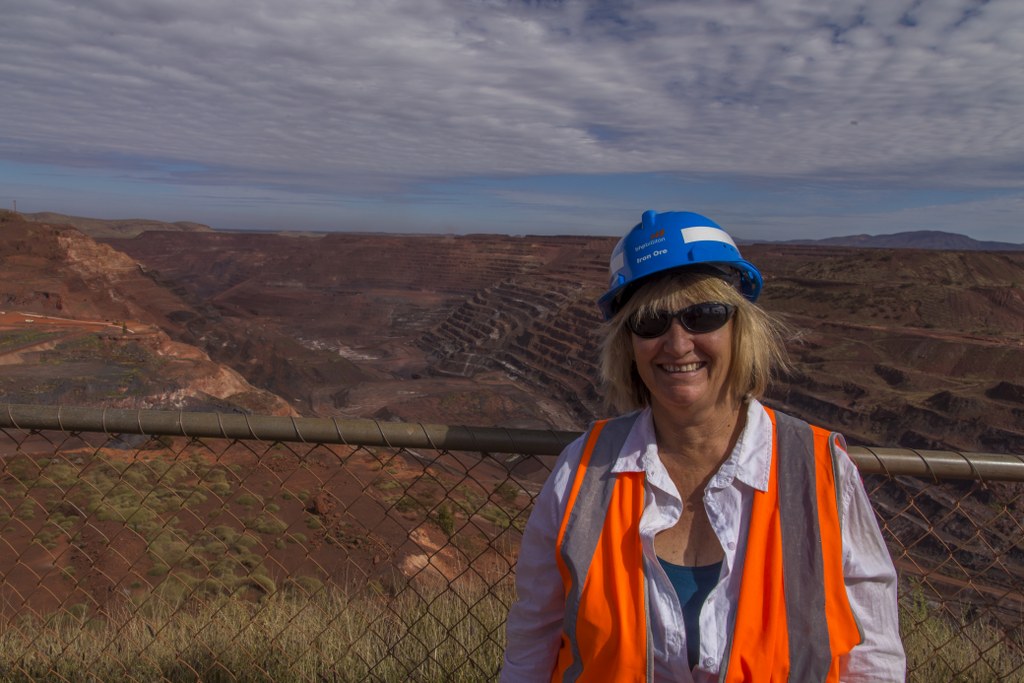 The scale of the operation is staggering with giant machine working around the clock 365 days a year. They estimate that there is enough ore there to continue mining for another 40 years. 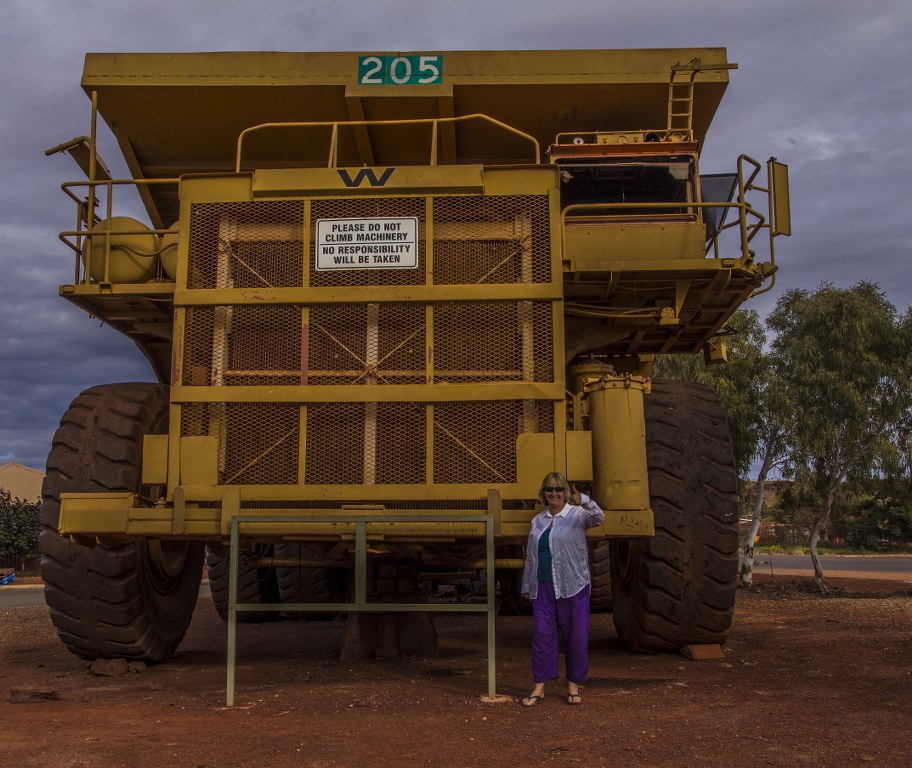 The nice staff at the visitor centre let us camp the night in their car park so that we would be there ready for the early morning mine tour the next day. Unfortunately the town never sleeps. With the constant traffic going to and from the mine site and the never ending ore trains we didn’t get a lot of sleep either. One of the many staggering facts that we were bombarded with during the tour is the IT infrastructure. The whole vast mining operation here is controlled by a bunch of people sitting in front of computers 2,000 kms away in Perth. They have real time information on where every machine is and what it is doing. What a computer game!

If you want to get a good taste of much of what The Pilbara has to offer as far as geology, wildlife, vegetation, and indigenous culture go, Karajini National Park is the place to go and that is where were heading next!