The Grampians is a mountainous region in Victoria that stretches for over one hundred kilometres from Horsham in the north to Dunkeld in the south, Hamilton in the west and Ararat in the east.

These kilometre high peaks started as river sediment 400 million years ago, then gradually tilted upward, resulting in walking tracks that end in breathtaking drops straight down from the summit to the surrounding plains. 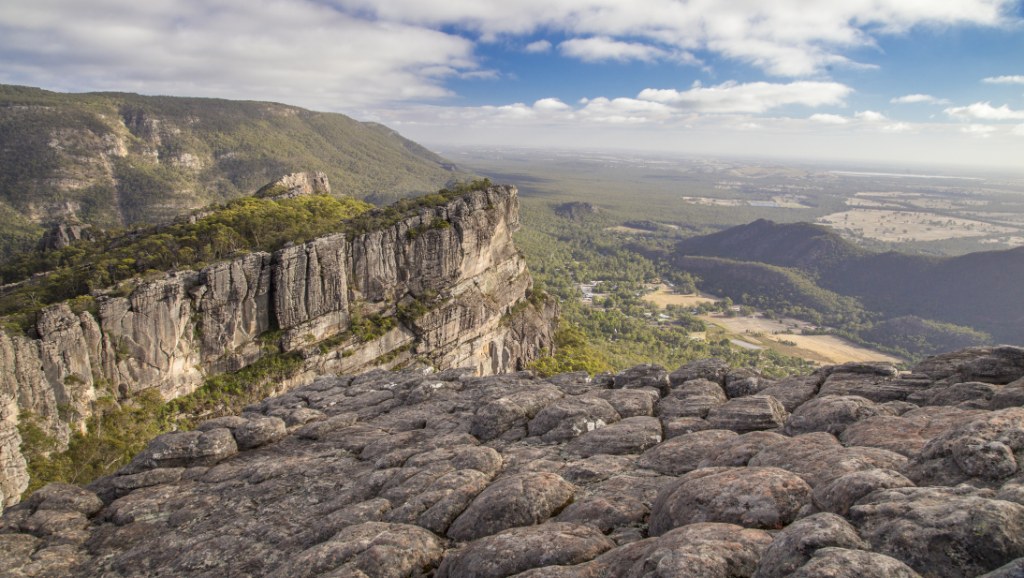 Diane and I spent a wonderful couple of weeks exploring the area and doing some of the great walks that abound throughout the national park. We managed to find some great free campsites near Ararat, Halls Gap, and Dunkeld to base ourselves while we absorbed the local culture, cuisine, and outdoor activities. 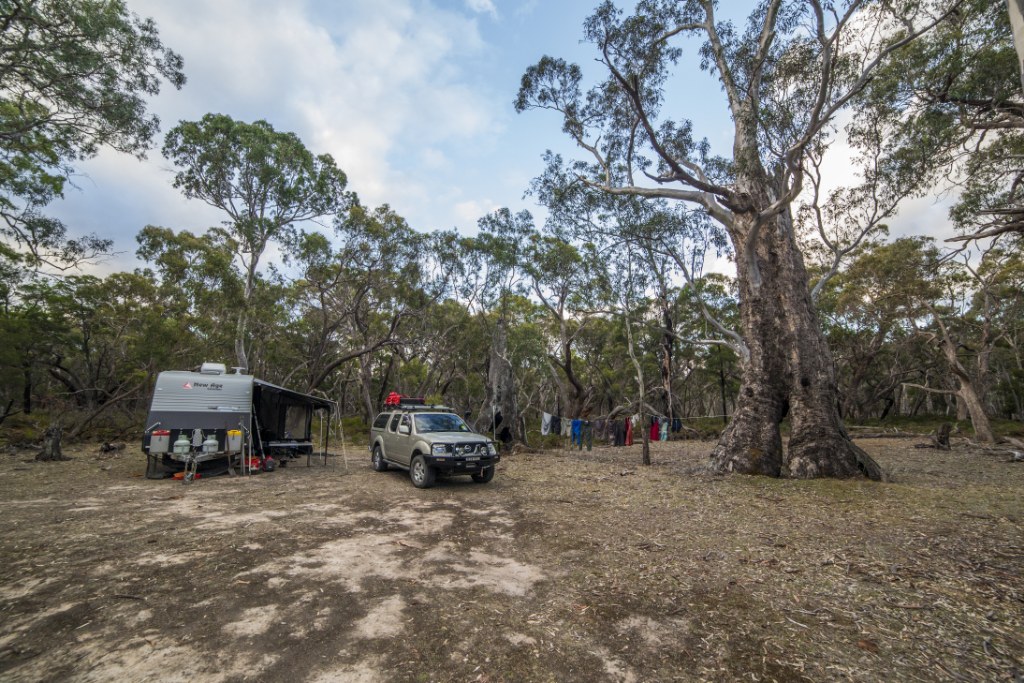 As I hiked the mountain tracks, I was constantly mesmerised by the magical vistas that greeted me around every corner.

Mt Zero is the northernmost peak in The Grampians, and from the top I got great views to Horsham, the Arapiles, Mt Stapylton and large olive plantations in the region. 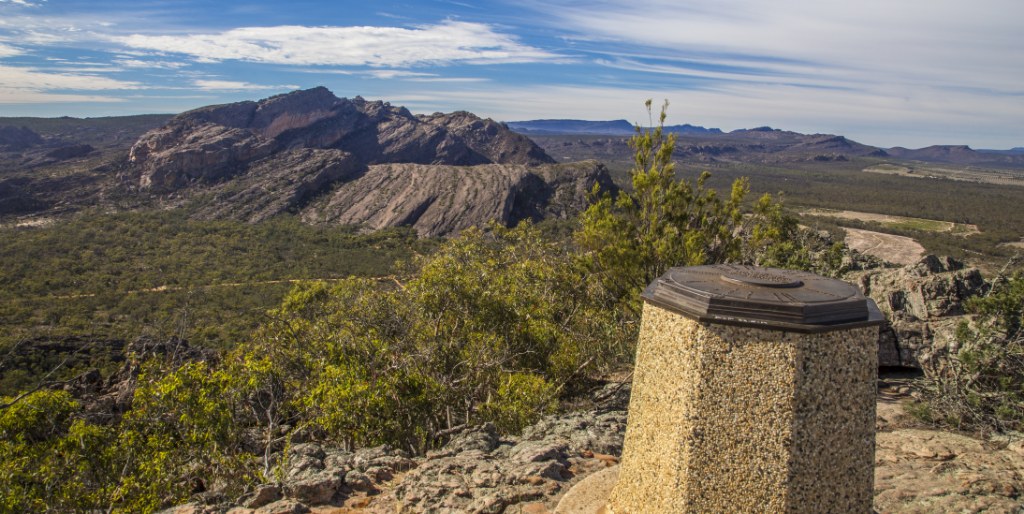 After starting at Zero, I descended back down to the valley and walked around and up the spectacular rocky cliffs of Mt Stapylton. 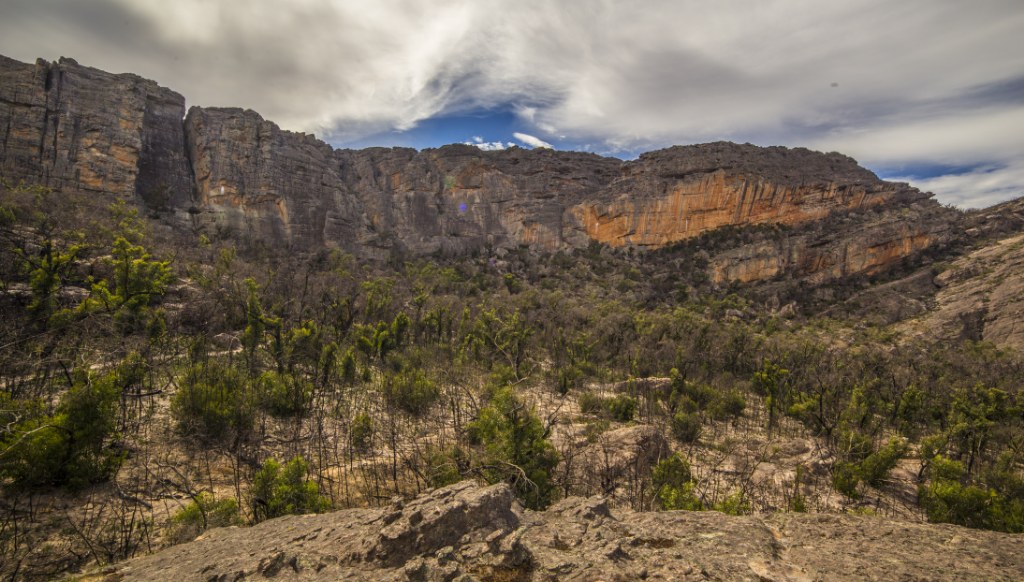 Sadly, much of this area was burnt out in a big bushfire a couple of years ago. The fragile country is very slowly recovering and new growth is visible everywhere, but it will take many years to return to how it was before the fires. 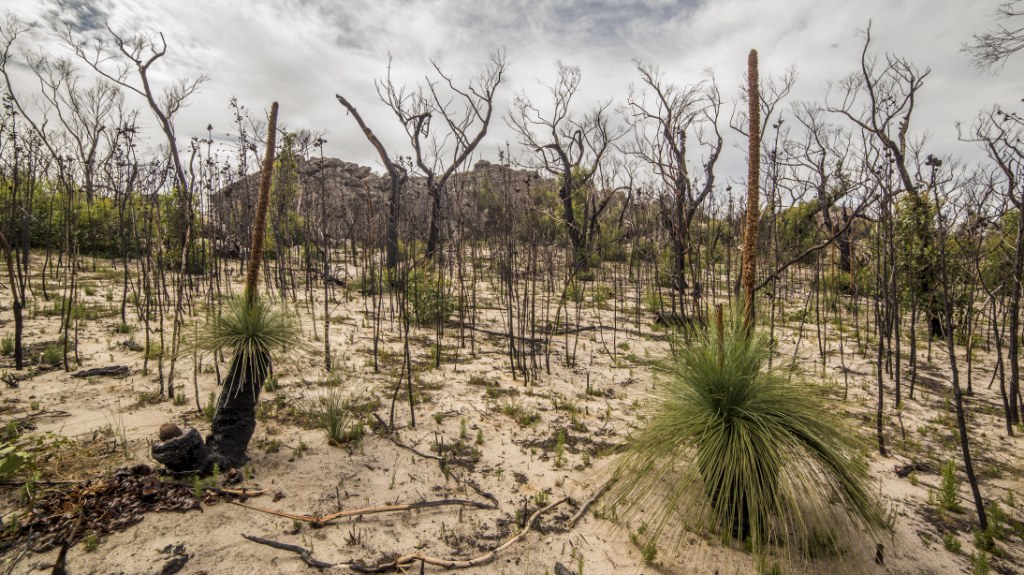 It was a hard climb to the top but was worth it for the views and the sense of achievement. There was nobody else around (apart from the occasional wallaby). I had the mountains to myself. 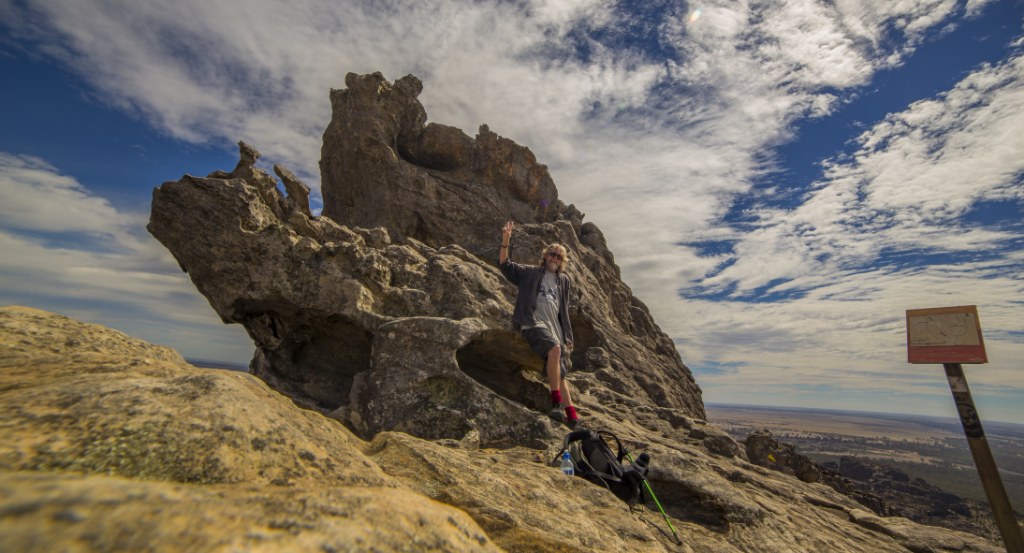 Next, “The Pinnacle,” a spectacular rocky outcrop perched 500m directly above the village of Halls Gap. It is a steep climb from the valley floor but I was rewarded with that “top of the world” buzz and a bird’s eye perspective on the central Grampians. 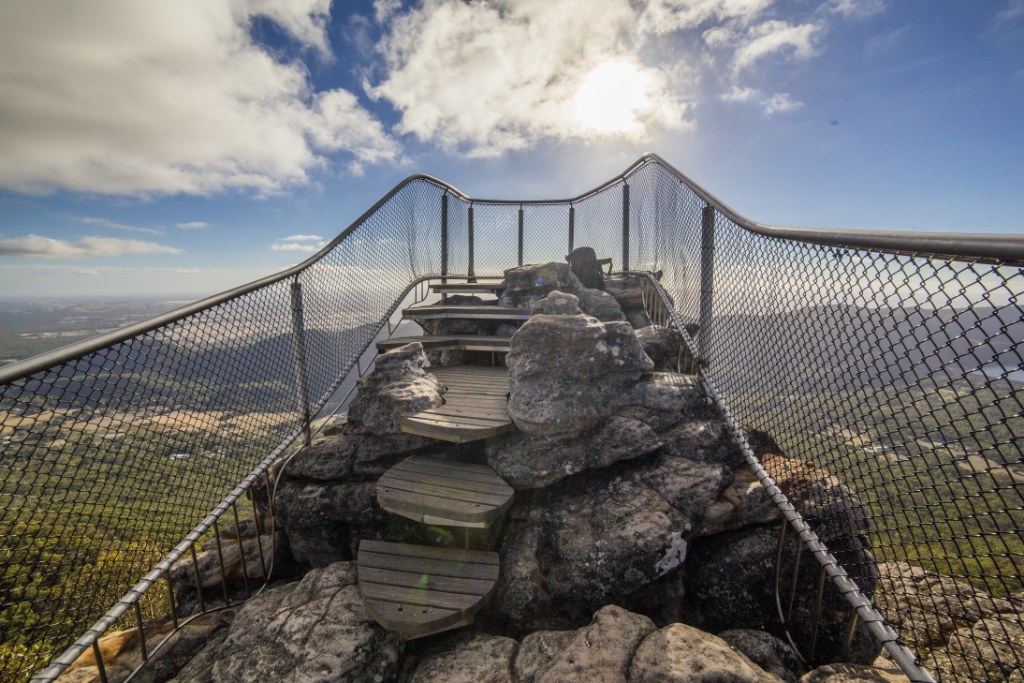 Across the valley from the Pinnacle, Boronia Peak offered up another great view of the valley in all directions. 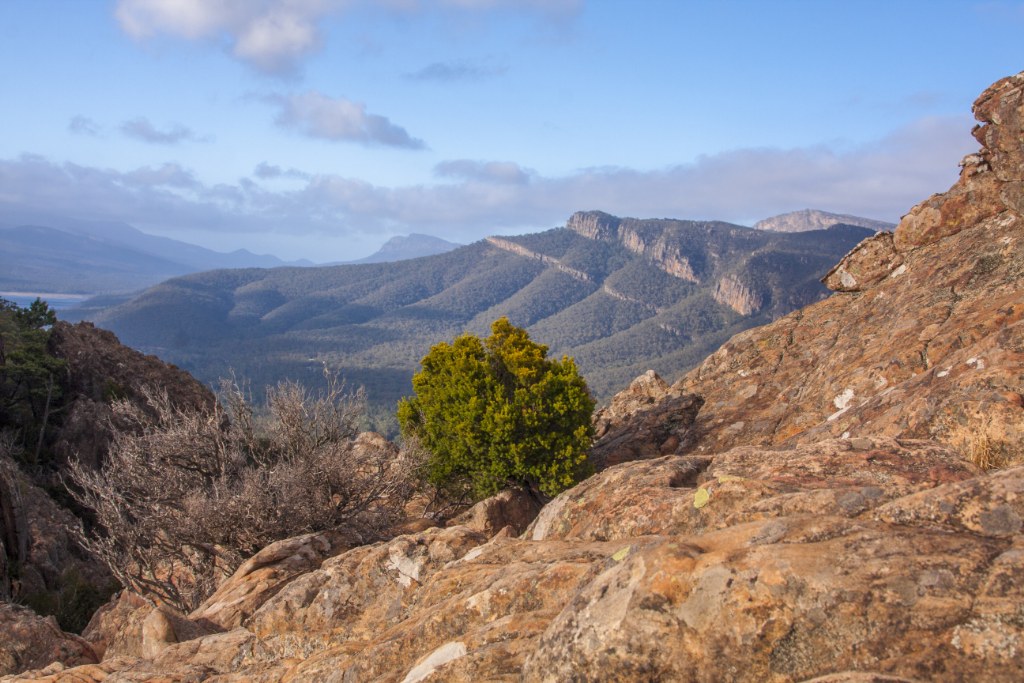 Getting up in the dark on a cold and misty morning, I drove up to an aptly named area called Wonderland and did a couple of very atmospheric walks. The first was a relatively easy two hour walk to Sundial Peak. At the top, just visible through the clouds, I was repaid for my efforts with a view of mountain vegetation shrouded in mist. And yes, a sundial! It did not appear to be working when I was there, which might have been the result of a total lack of sunlight. 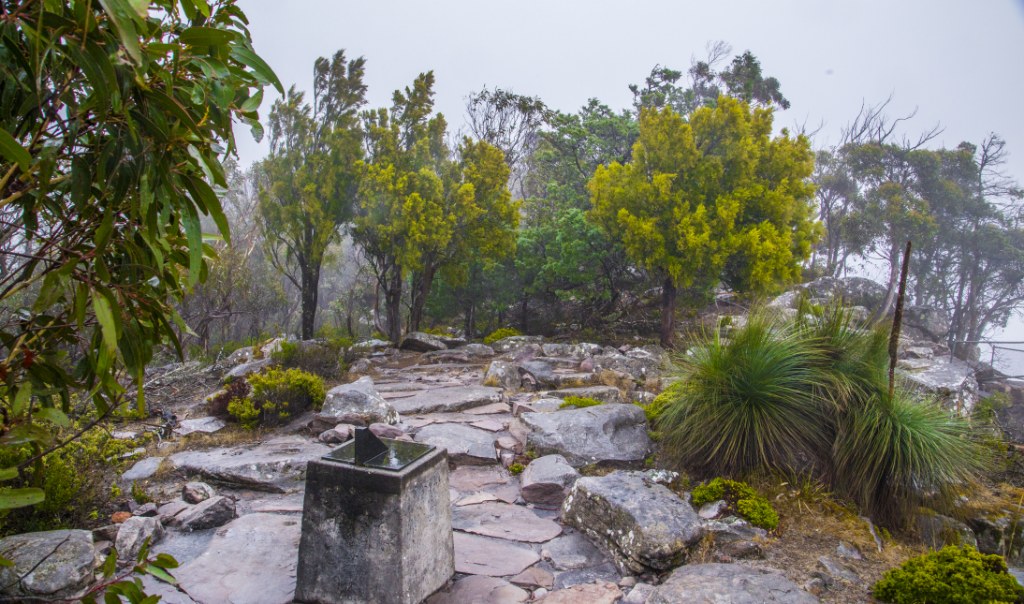 Returning to Leo, I felt that my little legs still had another walk in them and so I decided to tackle the hard rated 4 hour walk to the top of Mt Rosea and back. I am really glad I did, but it was quite a challenging walk as much of it was along a narrow ridge with steep drops on both sides and I could hardly see my hand in front of my face due to the still thick clouds. 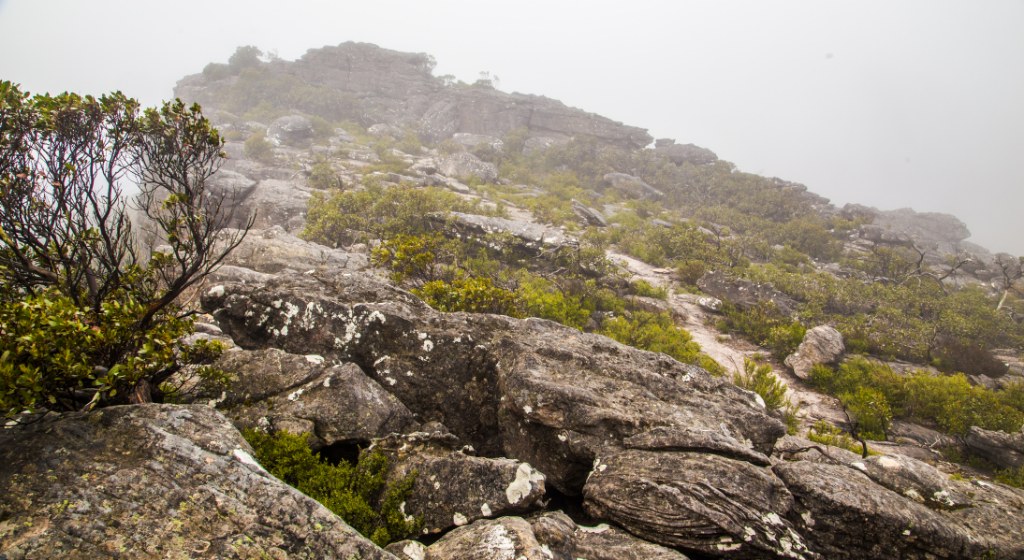 I did have some great views along the way, but the only way to know I was at the top was that the track stopped. 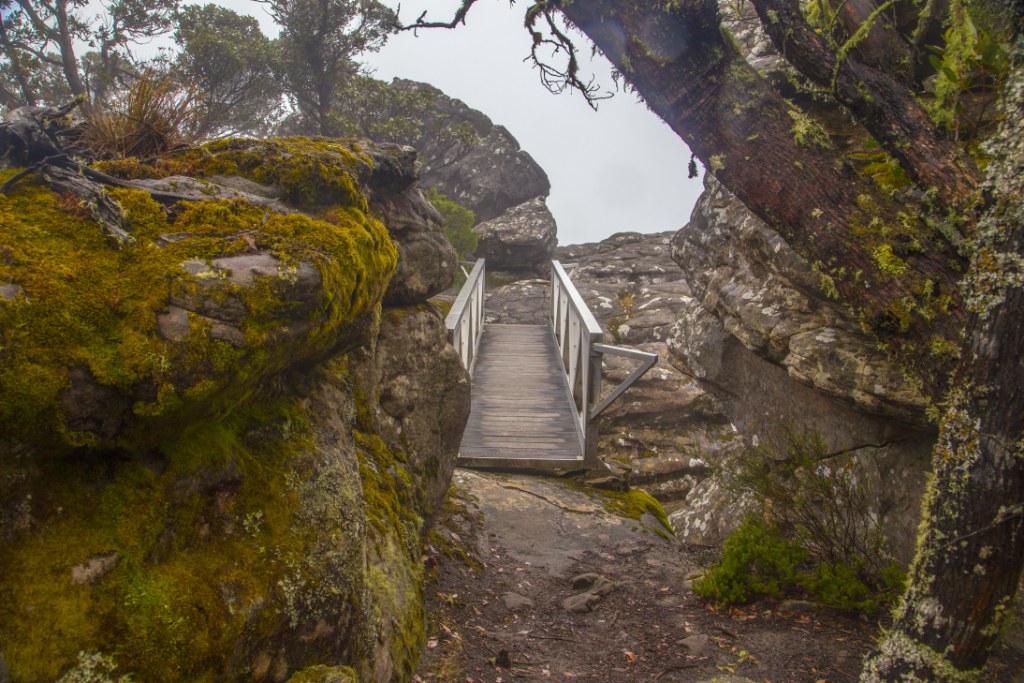 “The Gramps” attracts a steady stream of tourists, but during the long weekend that we were there, it virtually exploded with people. We took the opportunity to explore surrounding areas including Stawell, where we got to watch the big cricket game between the local team and their arch enemies Ararat. While we were there we were lucky enough to come across a couple of wild card entries in the upcoming Easter Stawell “Gift,”. 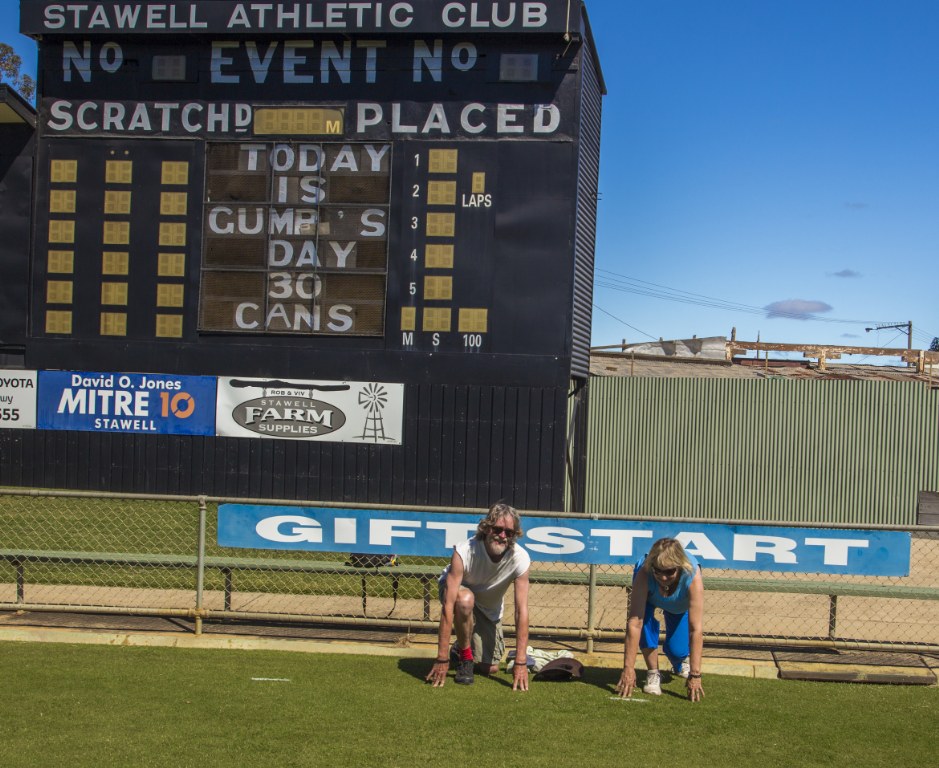 We also took time out from our busy schedule to combine some culinary and cultural delights at the Halls Gap Indian Restaurant. It was a great way to end our stay at “The Gap”. 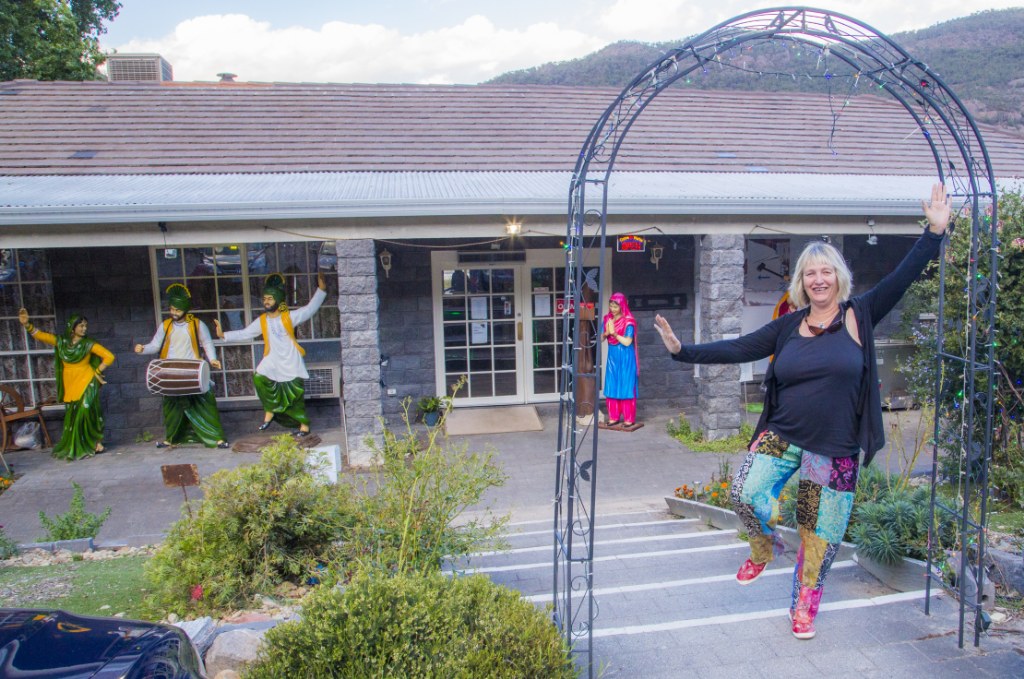 Once we relocated to a lovely free camp spot near Dunkeld called Freshwater Lake I prepared to knock off the last two peaks on my list, Mt Sturgeon, and Mt Abrupt. 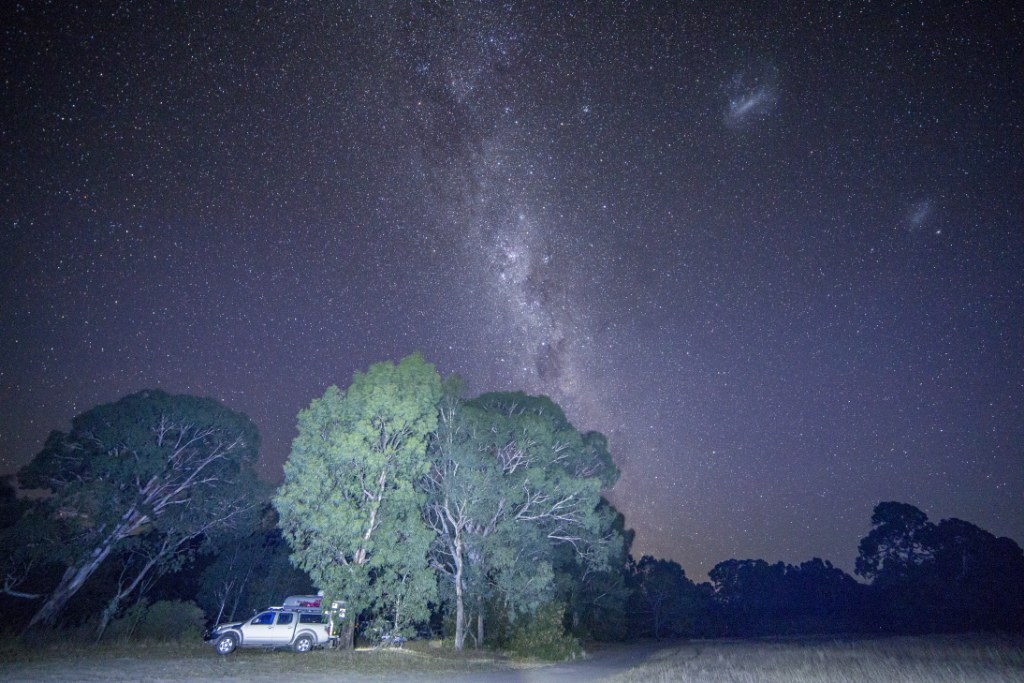 They were both great hikes and intrepid adventures, as I set off before dawn so that I could be up at the summits for the sunrise. It is quite surreal and magical climbing a mountain when all you can see is what is illuminated in the cone of light from your headlamp. 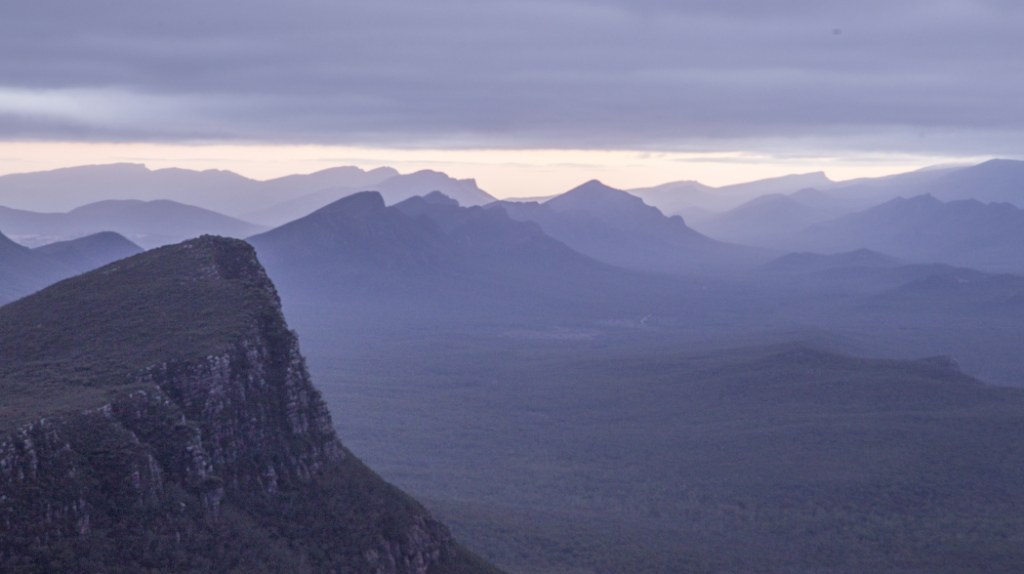 It was a great feeling to be on top first thing in the morning. The views stretched for vast distances in all directions. 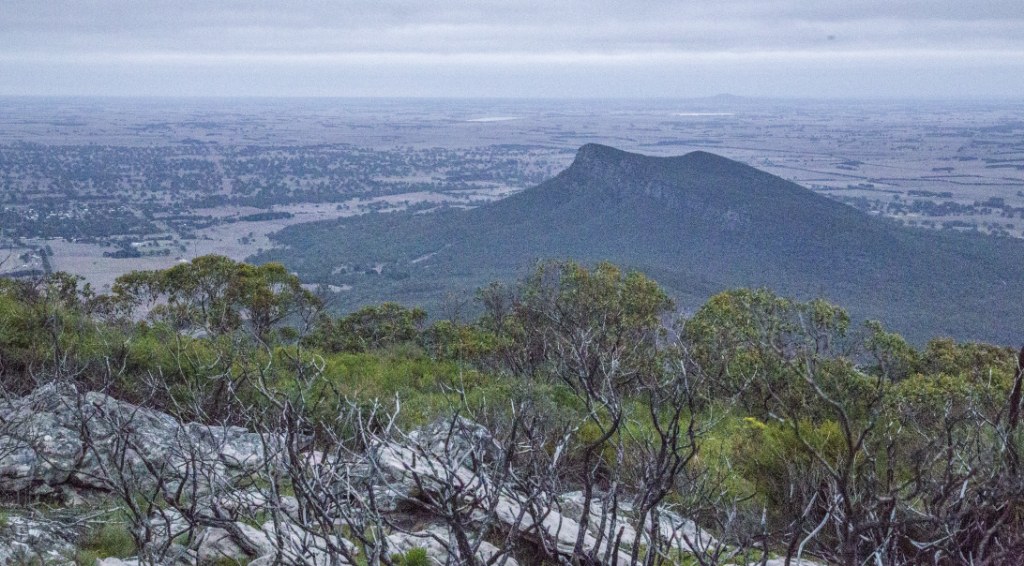 The view from Mt Sturgeon north to Mt Abrupt and beyond 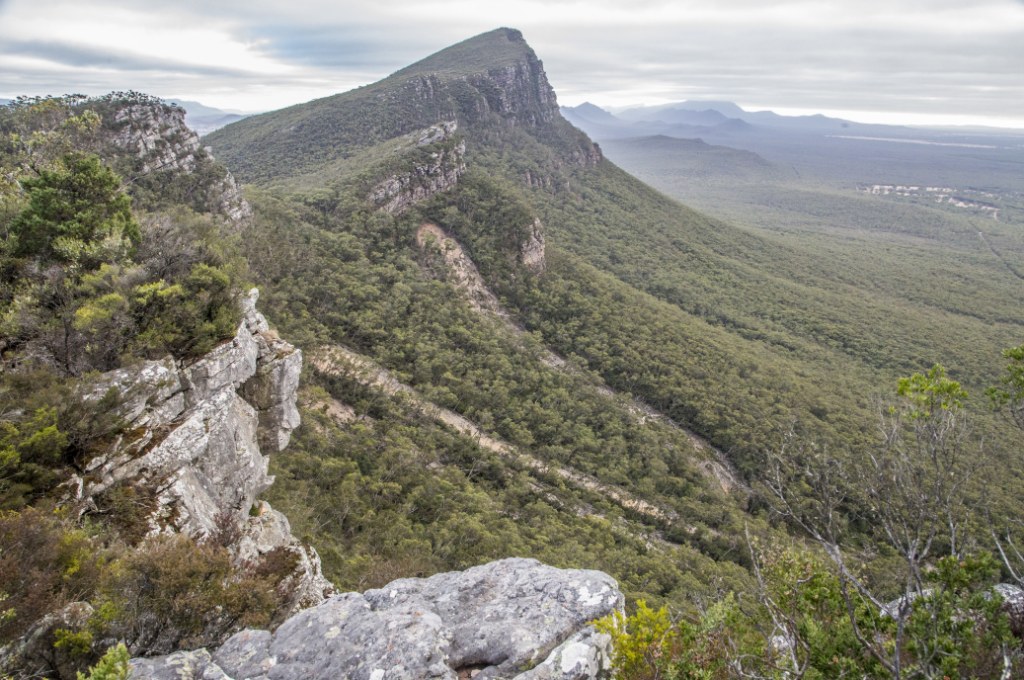 Once back down to Leo I could look back up to where I had just been. 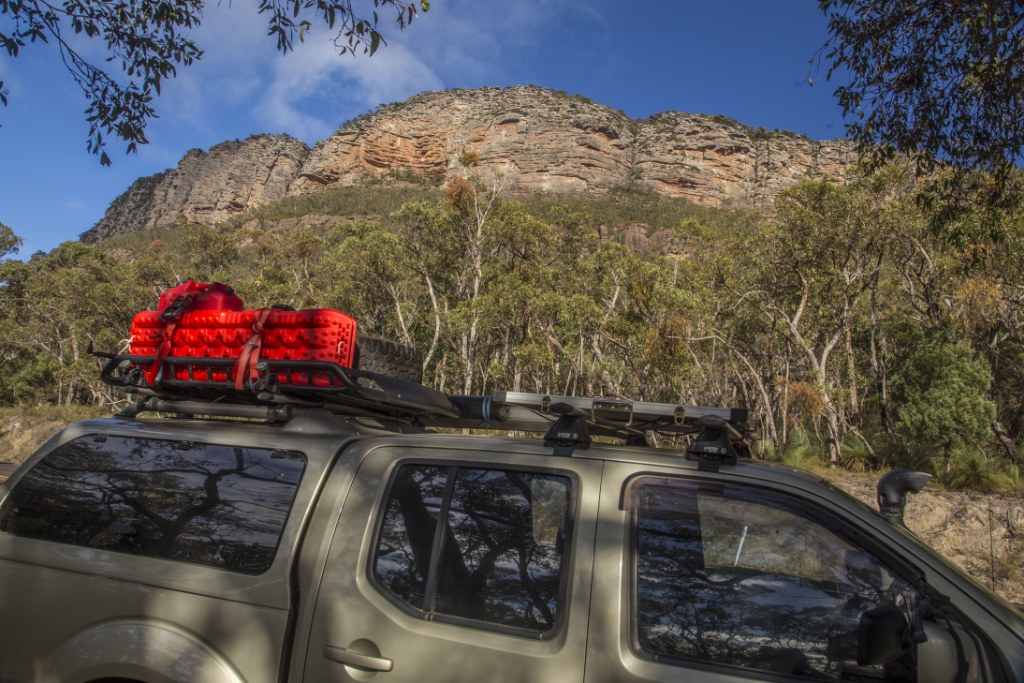 As we left The Gramps and headed south towards the Great Ocean Road and new adventures it was lovely to pause in appreciation for the wonderful time that we had spent in this neck of the woods. 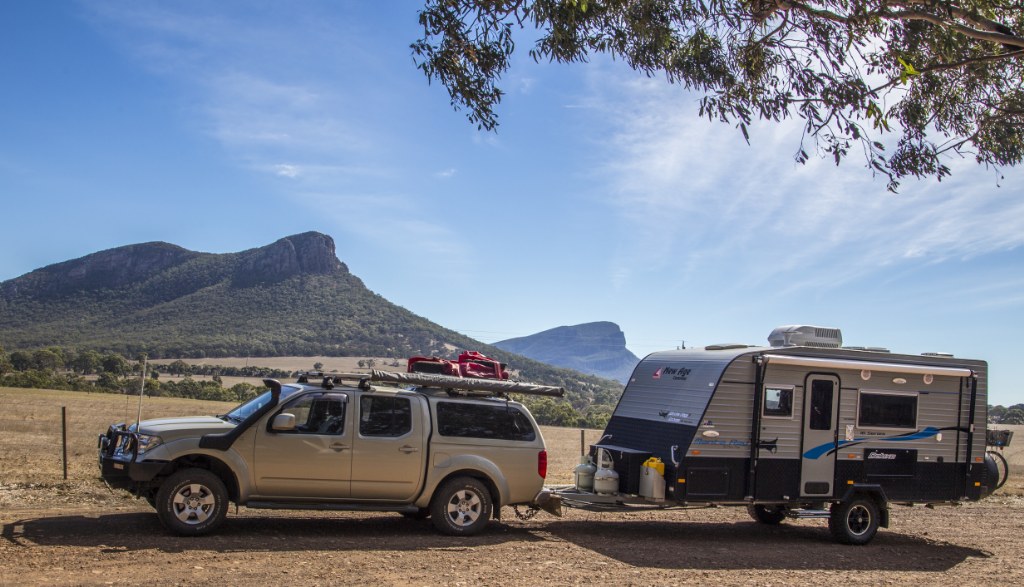