After a week of exploring the area around Kununurra and Wyndham, some of us were ready to tackle the infamous Gibb River Road across to Derby. We left our comfy digs (and our shady swimming pool) at Perry Creek Farm, bound for 660 km’s of rough, dusty, remote and mostly unsealed road. 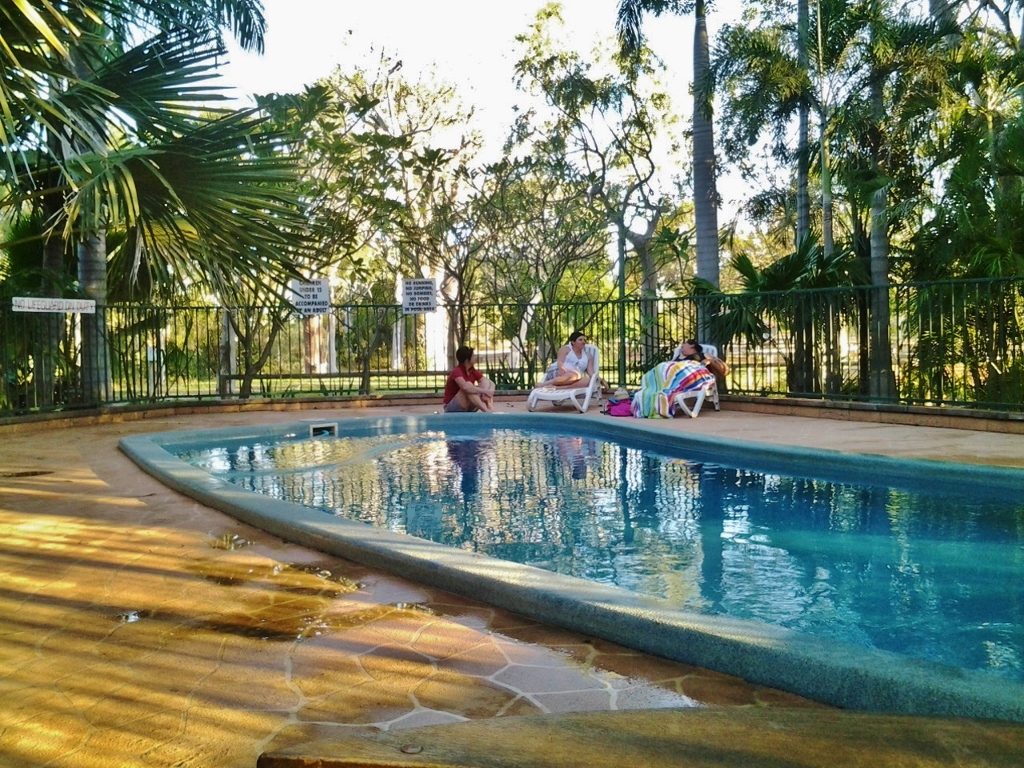 Now, if it sounds like I didn’t fully embrace the GRR, in my defence, I don’t think anyone really enjoys it, it’s just something you do, a rite of passage. At the Pentacost River crossing, after a couple hours of juddering corrugations and clouds of bulldust, Rod asked someone coming the other direction if the rest of the road was in any better condition. Answer: “it’s crap!” with a big grin. Wouldn’t be an acheivment if it was enjoyable.

I have no regrets, but like most people (I’m guessing), I wouldn’t do it again.

We didn’t explore all of the scenic gorges and waterholes, most were a long way up rough side-tracks, with expensive accommodation for your troubles. Still, there was some lovely scenery along the drive and we managed to find our way to some beautiful picturesque places without breaking the bank, Leo or the Wombat. 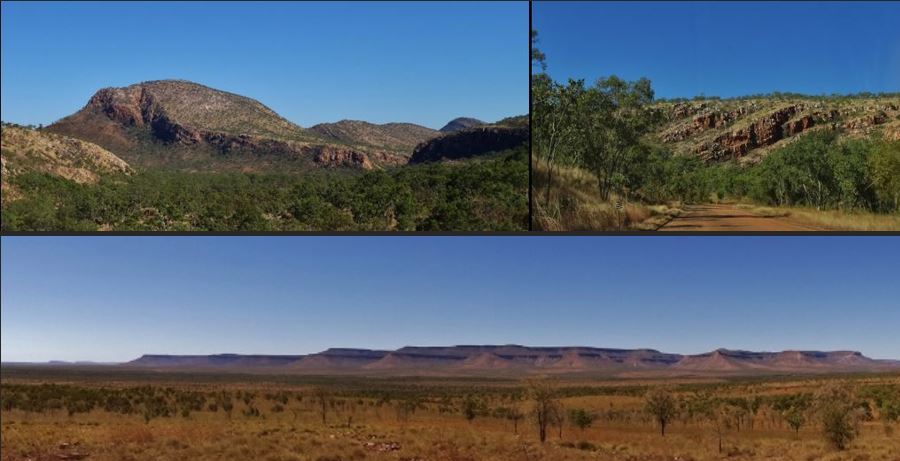 Our first paid campsite was at Manning Gorge. Only 8 k’s off the main road, with a swimming hole in the campground itself and another, even more spectacular one at the far end of a moderate hike. The beginning (and end) of the walk was a bit quirky, as you had to get across the river before you could go anywhere else.

On the day of our walk, we started early, but by the time we reached our destination, it was already getting pretty warm. It took me about 20 seconds to strip down to my swimmers and jump in. 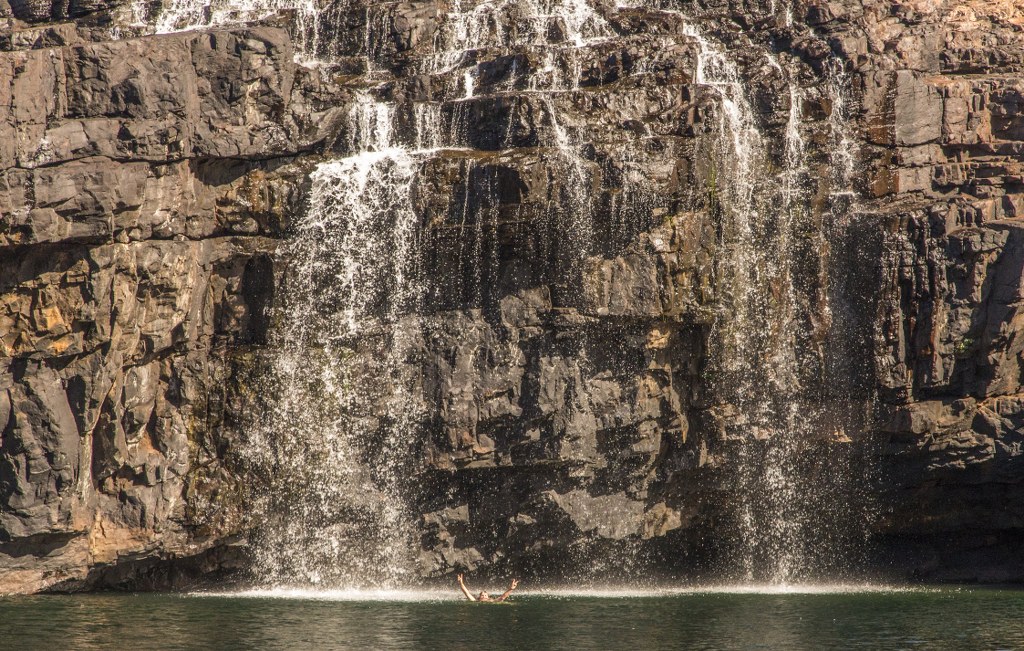 We spent a very enjoyable hour or so there at that magical spot, creating some of those memories that make you smile. 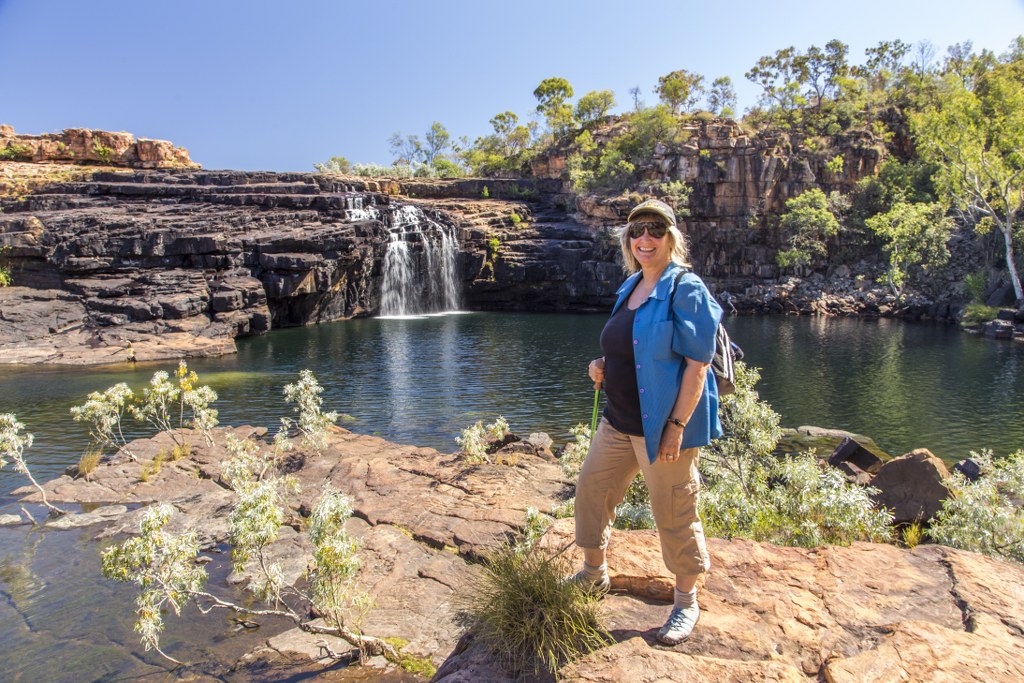 Because we had such a lovely campsite along the river, we stayed another couple of days, taking advantage of the swimming hole and shady creek in the campground. 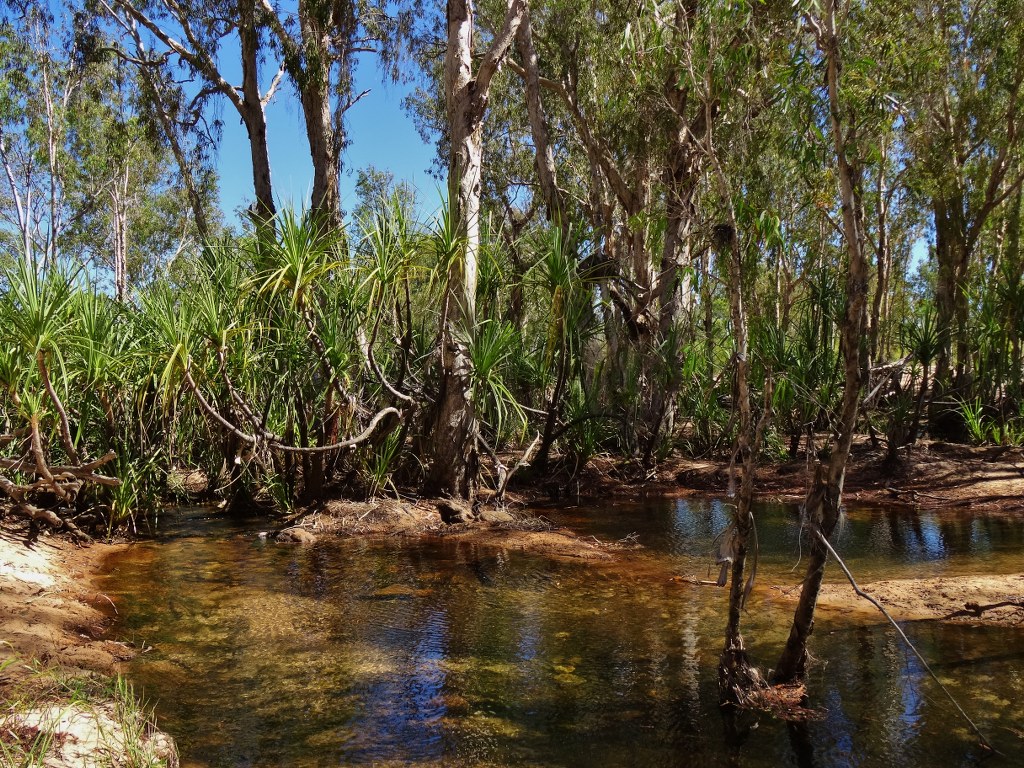 Soon though, it was time to go bumping along to the next spot, even if we weren’t entirely sure where we would end up that night. Along the way, we stopped off at Galvan’s Gorge to do some sight-seeing. It was very cool and inviting, but I surprised even myself by electing not to jump in. 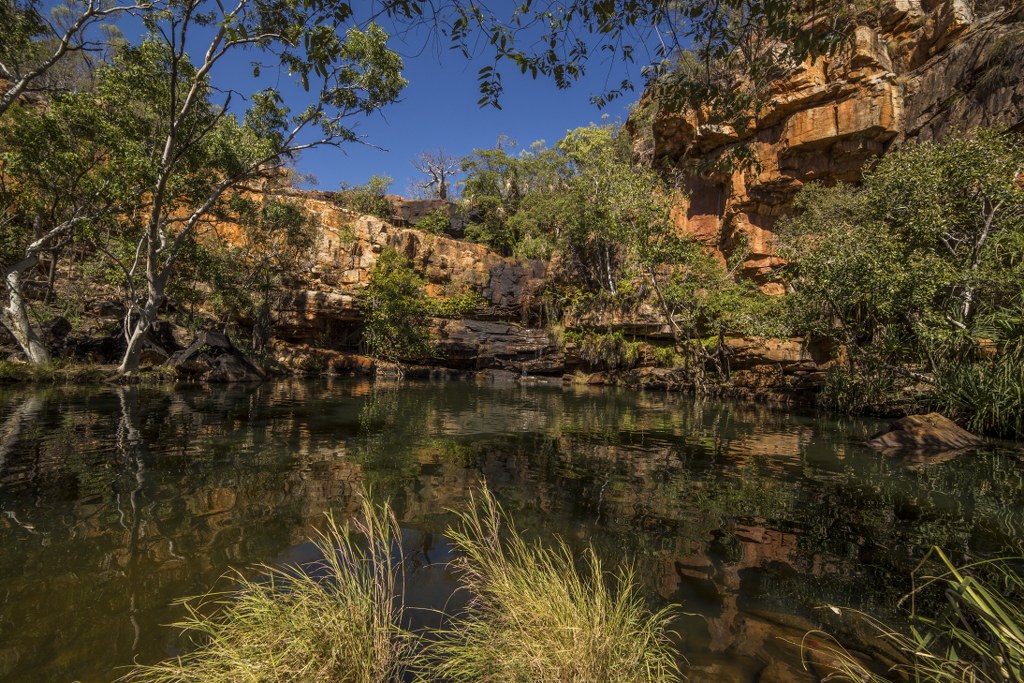 Later that afternoon, when we discovered the perfect cool and shady camping spot, secluded and complete with our own private swimming hole, I had no regrets. 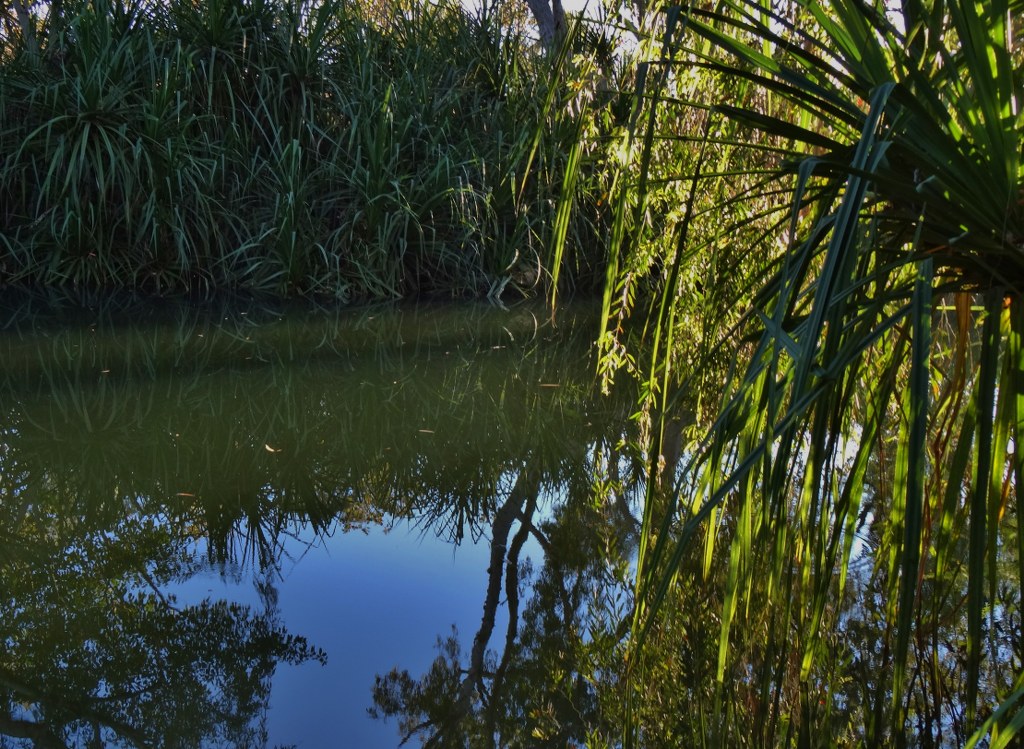 Our new campsite was only a few minutes up the road from the turnoff to Bell Gorge, another iconic walking track to another stunning waterfall and swimming hole. It was quite a challenging walk, steep and slippery in places, but what a reward! Once again, I wasted no time in getting wet. Even Rod couldn’t resist. 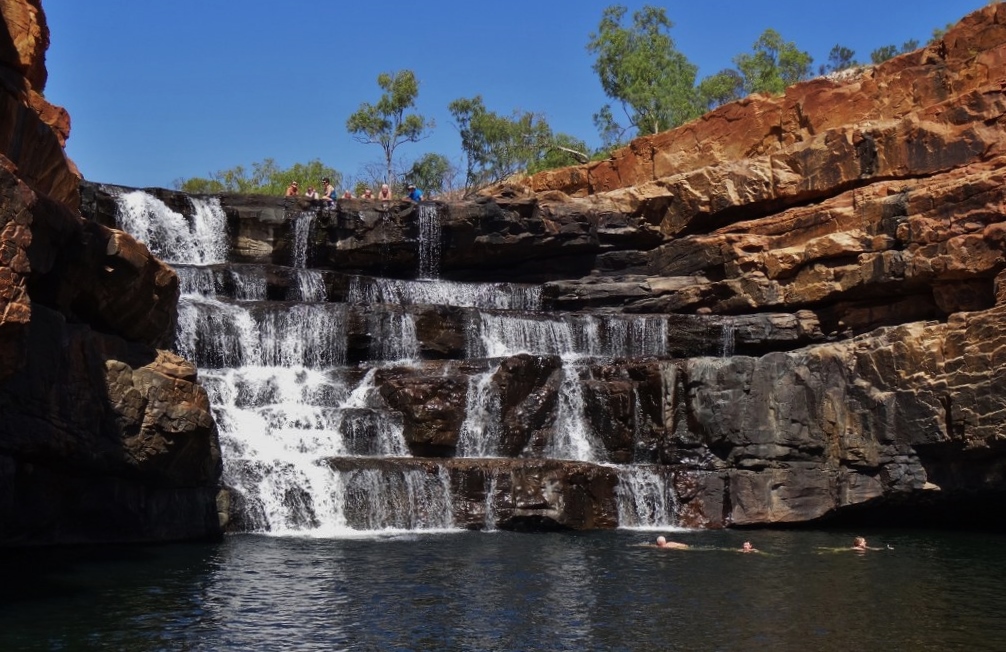 By the time we got back to camp, we had warmed up again, so we had a dip in our private swimming hole before preparing for a relaxing evening under the stars. Life is very good. 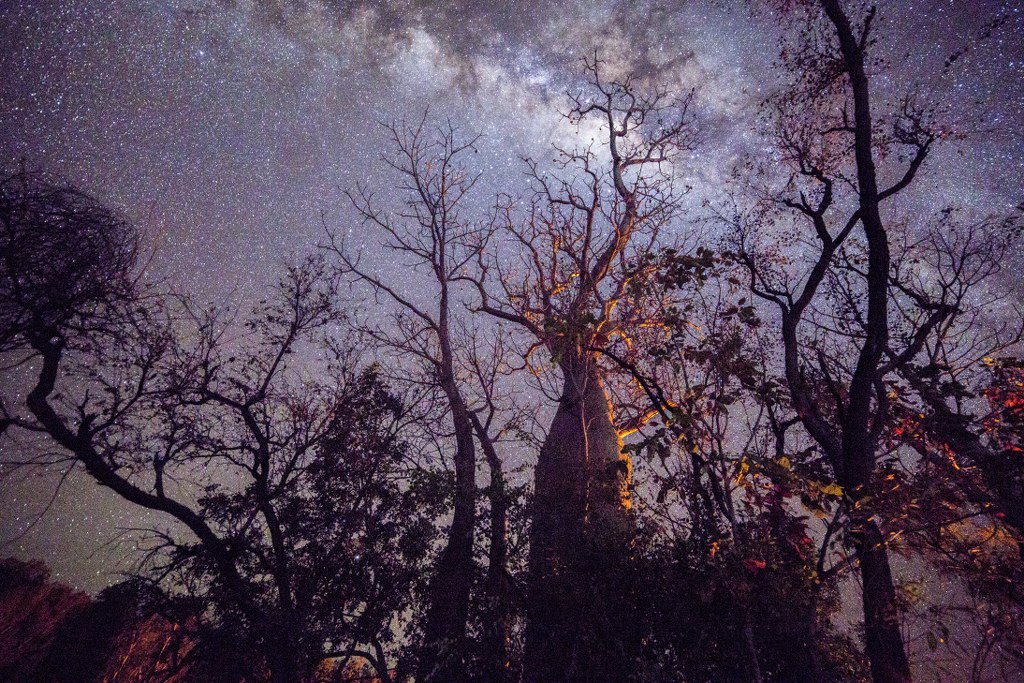 Next day, on Rod’s birthday, we relocated up the road to Windjana Gorge. He’s now 62 years young and fighting fit! I won’t say too much more, or else everyone will want one.

Windjana Gorge was spectacular and a bit mind-boggling, for a few reasons. The canyon runs for around 3.5 kilometres and at places, the stunning limestone walls are over 30 metres high. The mind-boggling thing is that it used to be a reef, completely submerged in the inland sea that covered this area. 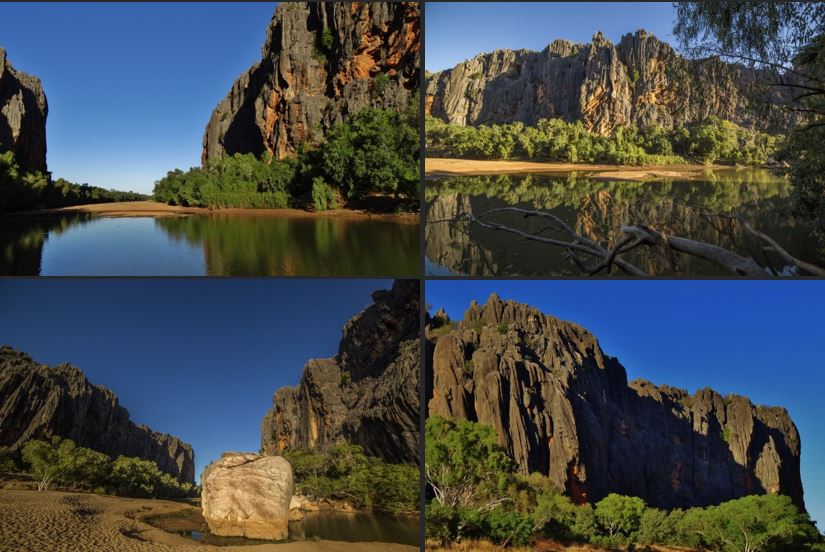 The second mind-boggler is the abundance of freshwater crocodiles that live in the gorge. In the wet season, the Lennard River flows through the canyon, but from May – September, there are steadily dwindling pools of water being shared by 100+ of these prehistoric critters. If you believe the propaganda, it is the premiere spot in Australia to view “freshies” in the wild.

I think I believe the propaganda. A very rough estimate resulted in 75, all snuggled up together very friendly-like. Not surprisingly, I chose not to go swimming there, either.

The third mind-boggling aspect of Windjana Gorge was the abundance of bloody people! In over 10 months of travelling, camping at over 100 sites, this was THE most crowded campground we encountered. I hope Rod’s snoring didn’t keep our neighbours awake.

The next day was our last one on the Gibb (just quietly, yay). We rocked up to Mark and Bec’s place in Derby in the afternoon and were welcomed with open arms. Great shady “campsite,” nice views, catered meals and very accommodating tour guides. The only cost: our sparkling company! It has been so wonderful to be in Derby for a week, feeling like part of the community. Our week here has been a real highlight of our journey so far, with hours of socializing, sight-seeing and silliness. 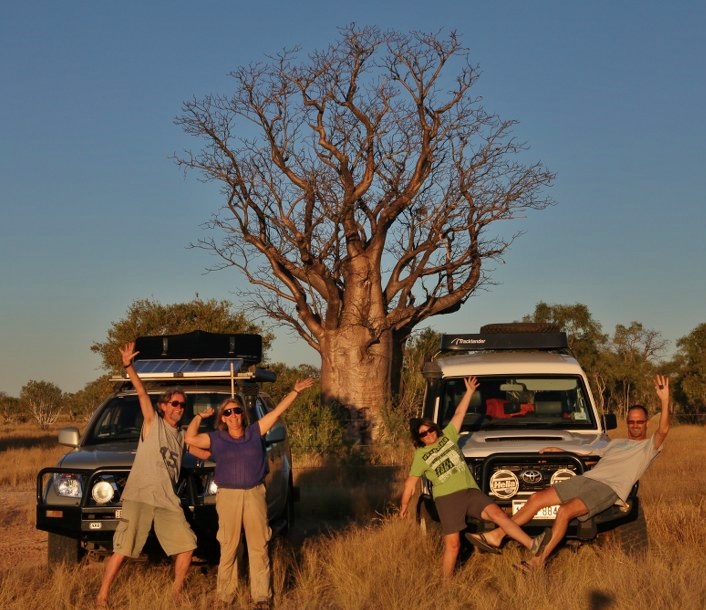 We are going to miss these guys.