Ever since I became the first left handed, sexagenarian Australian bloke to climb Mount Everest single-handedly, without oxygen or Sherpas (I did have a bit of assistance from Photoshop), I have had a passion for hiking to high places on our journey Into the Unknown. 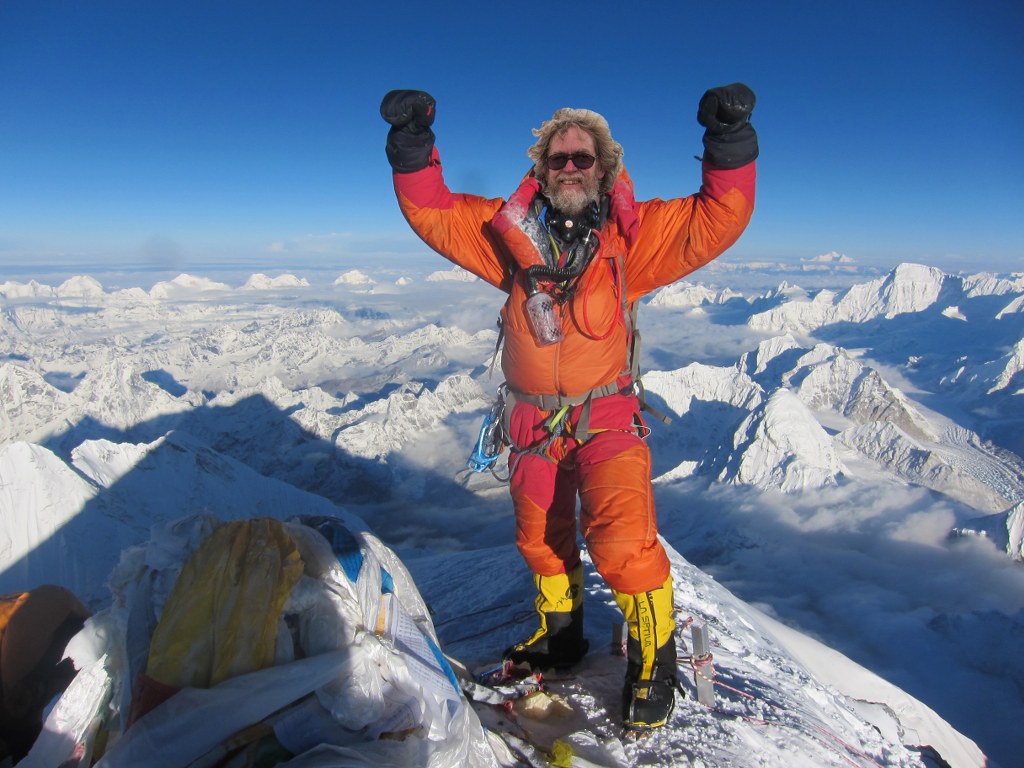 Over the past six months, I have had the great pleasure of standing on the top of many a mountain, enjoying the solitude, magnificent views and catching my breath in preparation for attempting to  get back down said mountain to Diane, Leo, and the Wombat–in one piece.

I started off with a bang by climbing the highest mountain in Victoria, Mt Bogong. It is just a smidge under 2,000 metres and, in typical Aussie subtlety, is known as “The Big Fella”. 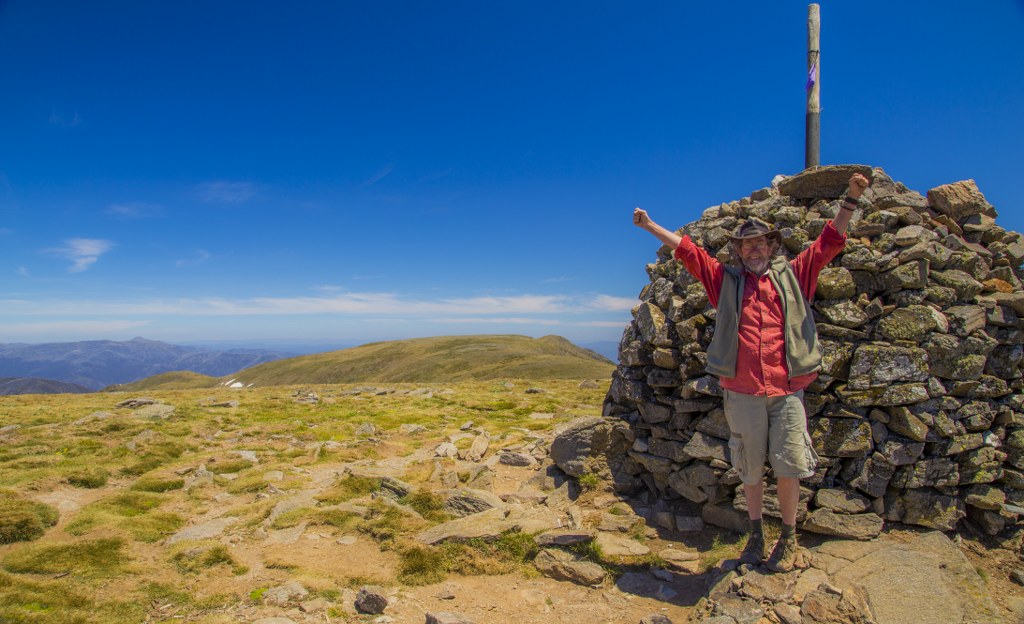 On our trip thus far we had mostly traveled through thousands of kilometres of flat outback country where the only opportunity to “get high” was to scamper up to the top of a sand dune.

We were camped at a lovely spot called Mountain Creek near Mount Beauty. The walk (climb) was over 20kms and entailed a 1,700 metres vertical rise. The track went up the aptly named Staircase Ridge, and even though the peak was not that “peaky” just about every muscle in my body was aching by the time I staggered up to the cairn at the summit. 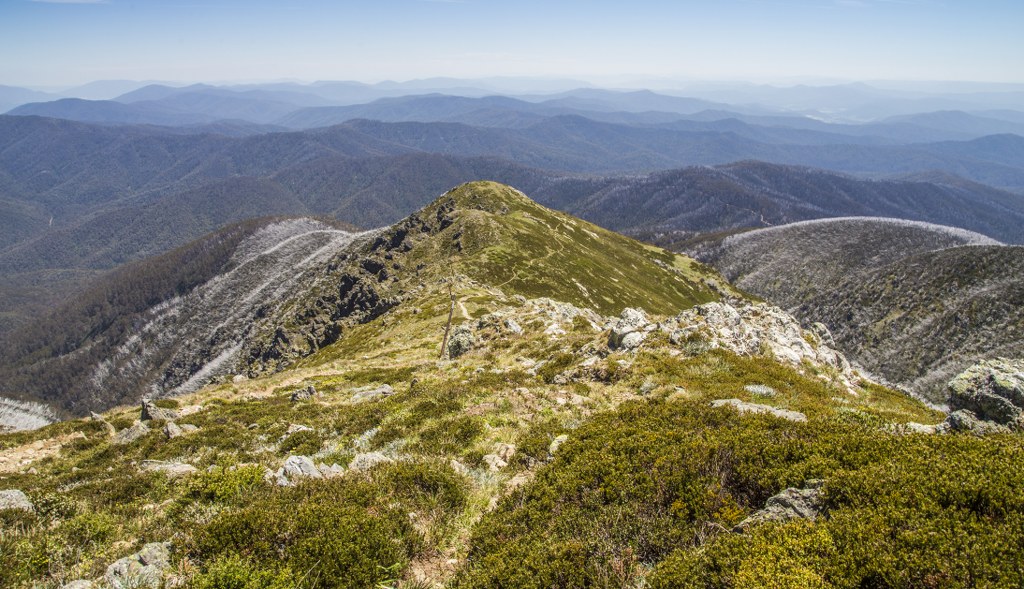 Even though it was difficult and painful to walk for the next few days, I was very chuffed that I had done it. The desire to “bag” more high places was in my blood!

Even though there were lots of lovely walks exploring beautiful country through the Victorian Alps, The Snowy Mountains, South Coast of NSW, and NE Victoria there were no really significant high spots to conquer until we got to Tasmania.

Mount William is the highest peak in NE Tassie and is situated in the appropriately named Mt William National Park. 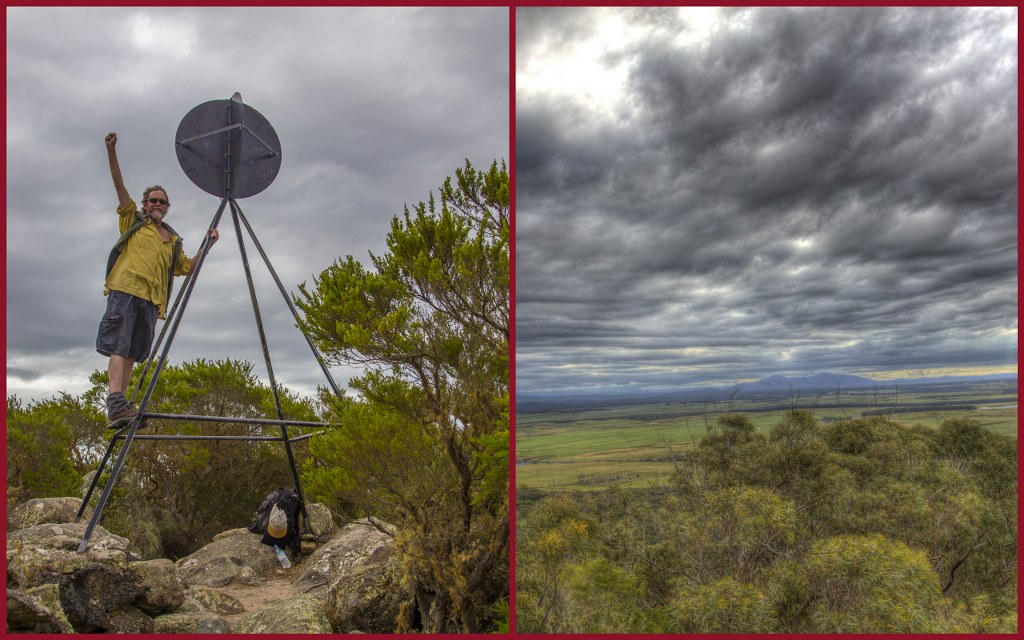 Although not a particularly arduous climb, the summit rewarded me for my efforts with a great 360 degree view of the NE corner of Tassie including Cape Barron Island in Bass Strait and the Western Tiers to the south.

Mount Donaldson is one of the best places to get a good perspective of the wild West Coast south of Arthur River and near the lovely little settlement of Corinna on the Pieman River. 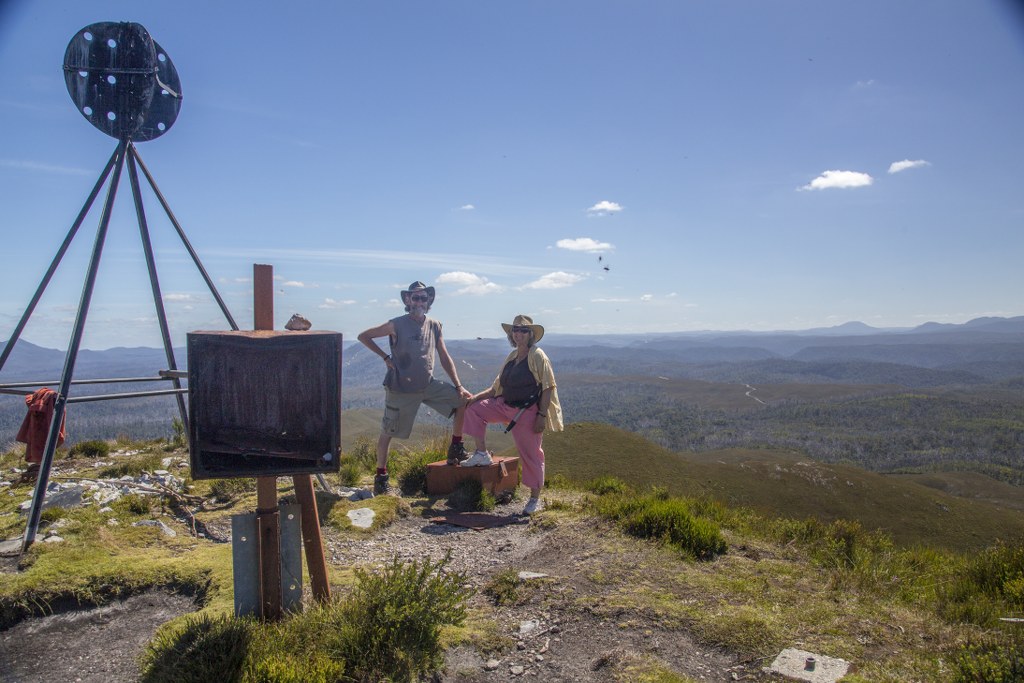 Again, it was not a super steep climb, but was still hard work as most of the two-hour hike was done without the protection of any shade on one of the few hot summer days that we encountered during our three months on the Apple Isle…and Tasmanian sunshine (when it does appear) is fierce.

The Needles are a number of rocky outcrops on the road from Mount Field National Park to Lake Pedder and the small town of Strathgordon. It is a short, sharp climb that takes around three hours return from the car park next to the main road . 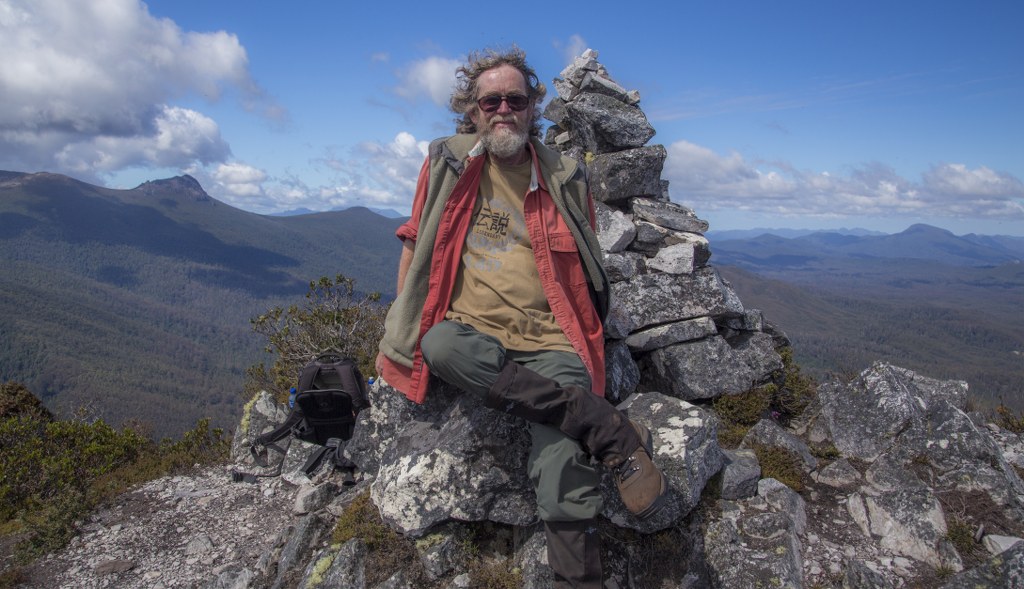 From the top I could look out over vast areas of the Tasmanian South Western Wilderness World Heritage Area and not another human being to be seen anywhere. Very special and spectacular! 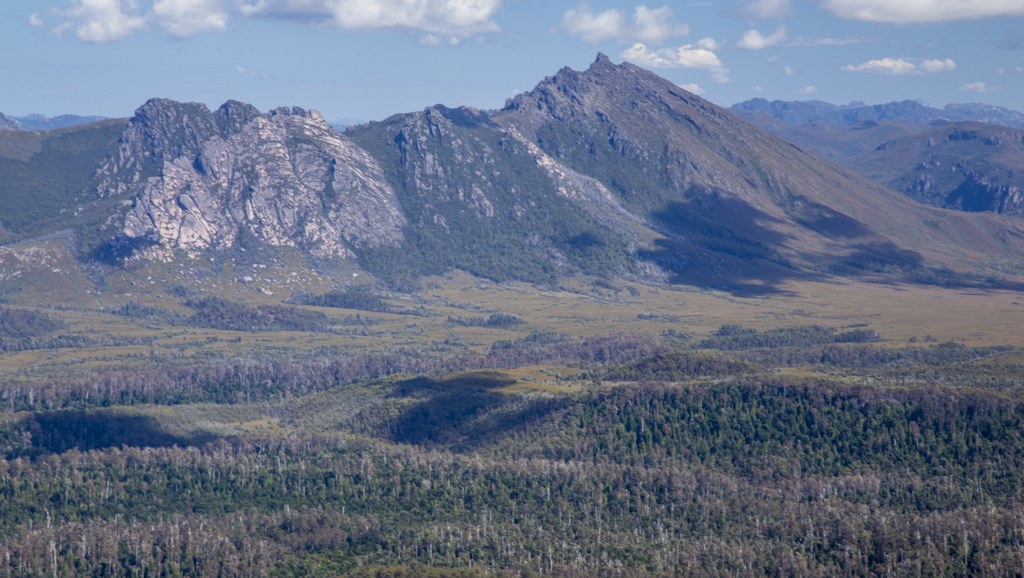 Hartz Mountain Peak at 1254 metres above sea level is the about highest spot in the south-west of Tassie and a great place to get a bird’s eye view of this part of the island. The eight km walk to the top, although challenging near the summit, is wonderful, climbing up above the tree line past lovely alpine terns, rocky outcrops, and picturesque vegetation including ancient King Billy Pines. 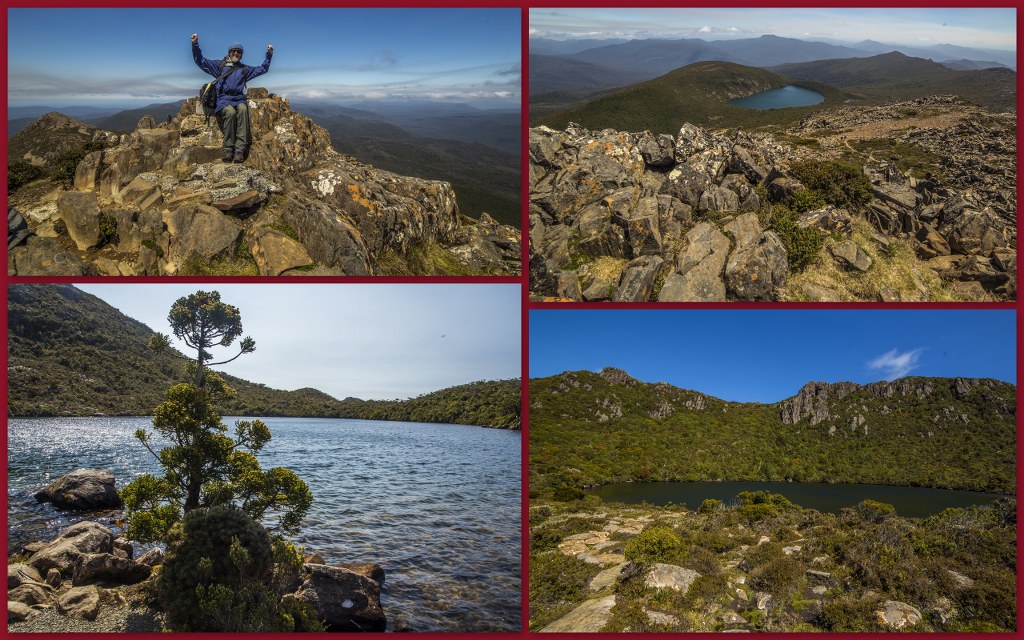 Mount Amos If you want to get a spectacular bird’s eye view of the Freycinet Peninsula, the top of Mount Amos is the place to go. It is also a great place to get away from the large crowds that swarm over the easier walks to view Wineglass Bay. I did the climb early in the morning and had the mountain to myself. It was not the easiest walk I had ever done. Much of the route was very steep, with slippery rock faces, and as it had recently rained, the wet surfaces did not help matters. I spent a lot of time on my bottom traversing slopes.

However, once I got to the summit it was all worth it with the beautiful Wineglass Bay and the peninsula spread out in front of me and below me. 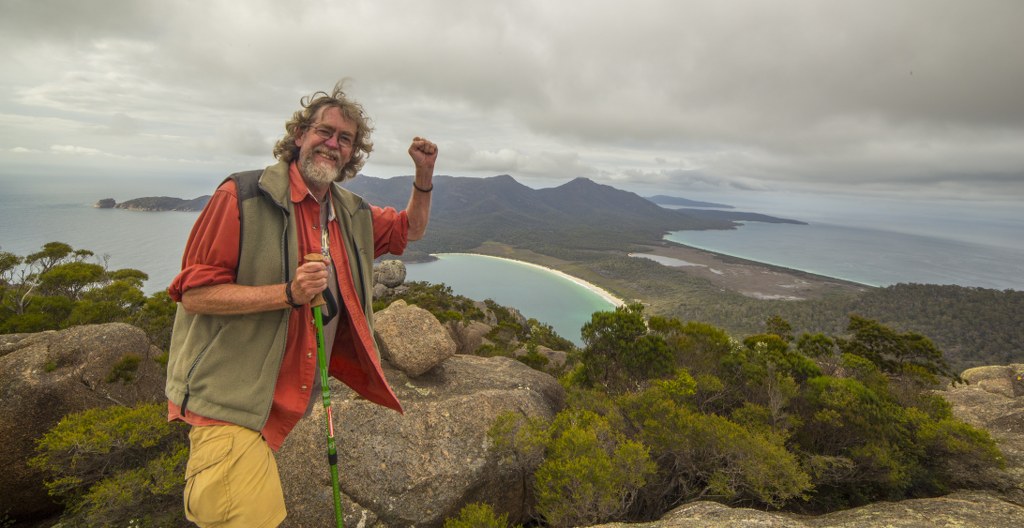 This was a great final walk before having to leave Tassie and head back to the big island.

Since arriving back in Victoria we have travelled west to the area around the Grampians National Park where there have been many more opportunities to get high in the mountains.