We were greeted like honoured guests when we arrived at our 2 week housesitting job at a beautiful organic avocado & mango farm in Carnarvon’s plantation district. 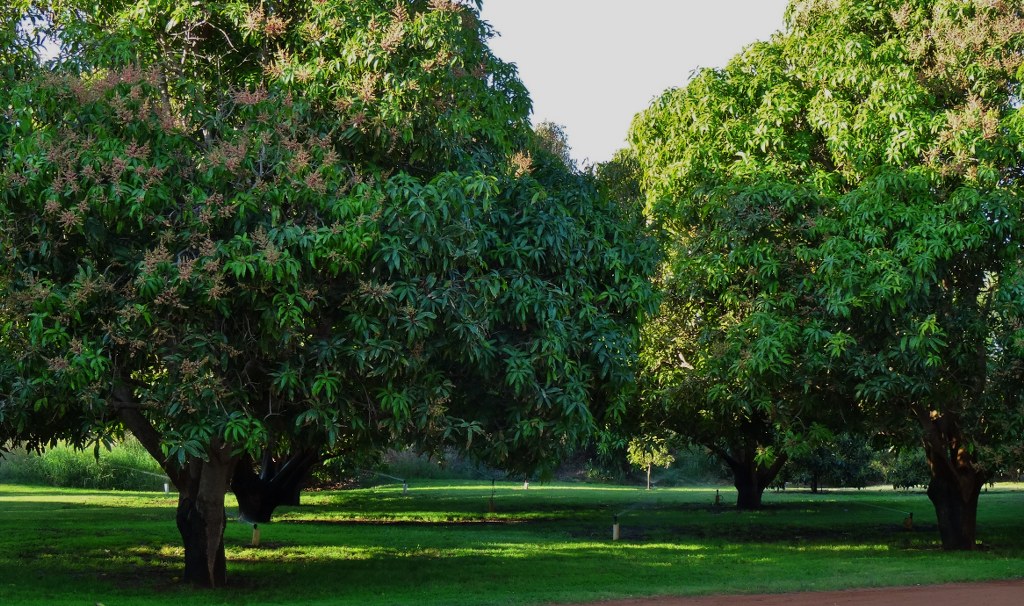 After months of hot, dry countryside, it was like arriving on another planet! Our hosts gave us the royal tour, our very own house and showed us all the ins and outs of looking after the 9 acres of fruit trees and their 2 lovable mutts, Oscar and Wally. 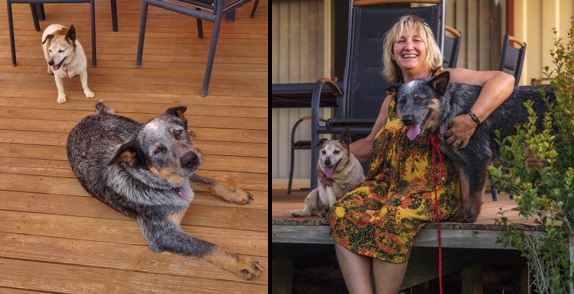 The property is very lush, with plenty of shady mango trees, and avocados in various stages of growth and recovery from cyclone Olwyn, which devastated the area only six months earlier. 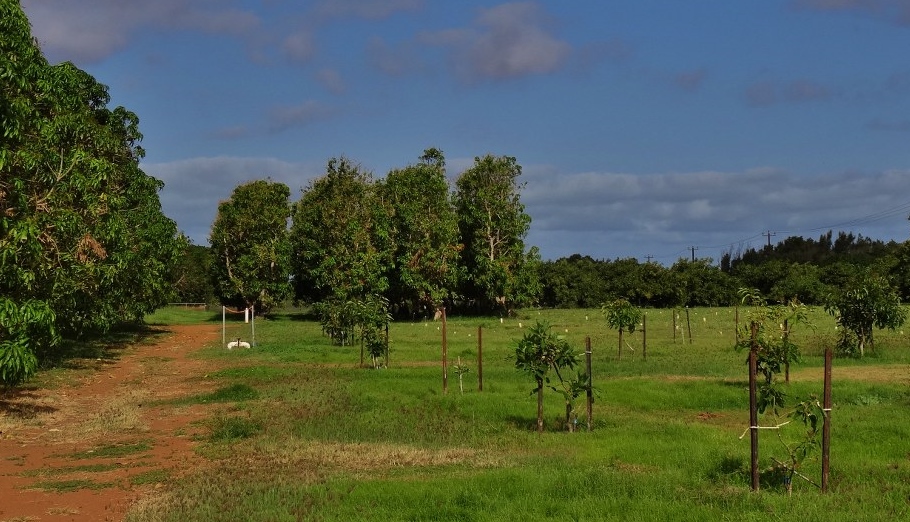 It sits on the banks of the amazing, upside-down Gascoyne River, which is the longest river in Western Australia, at 865 km. Most of the time, all of the water is underground in huge aquifers. 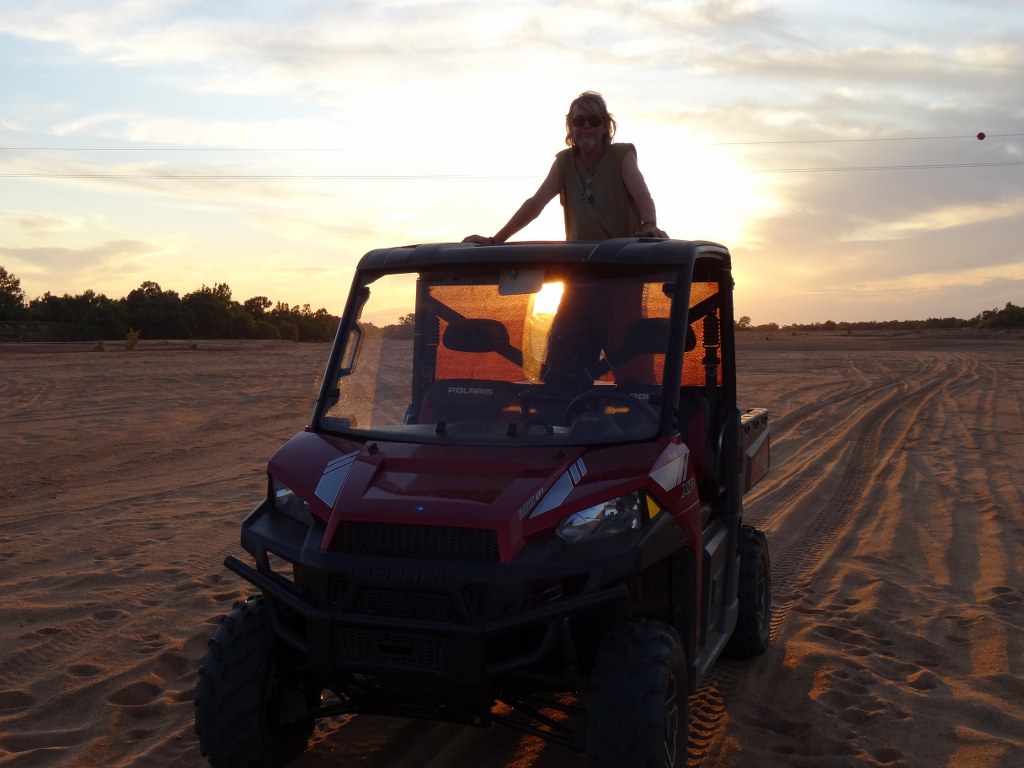 The wide, sandy riverbed makes for a picturesque playground for photographers, dog walkers and all-terrain vehicles/toys. Oscar and Wally loved their afternoon walks, which usually included a splash around in a waterhole or two. Old-timer Wally got to ride part way, sometimes feeling the need to navigate. 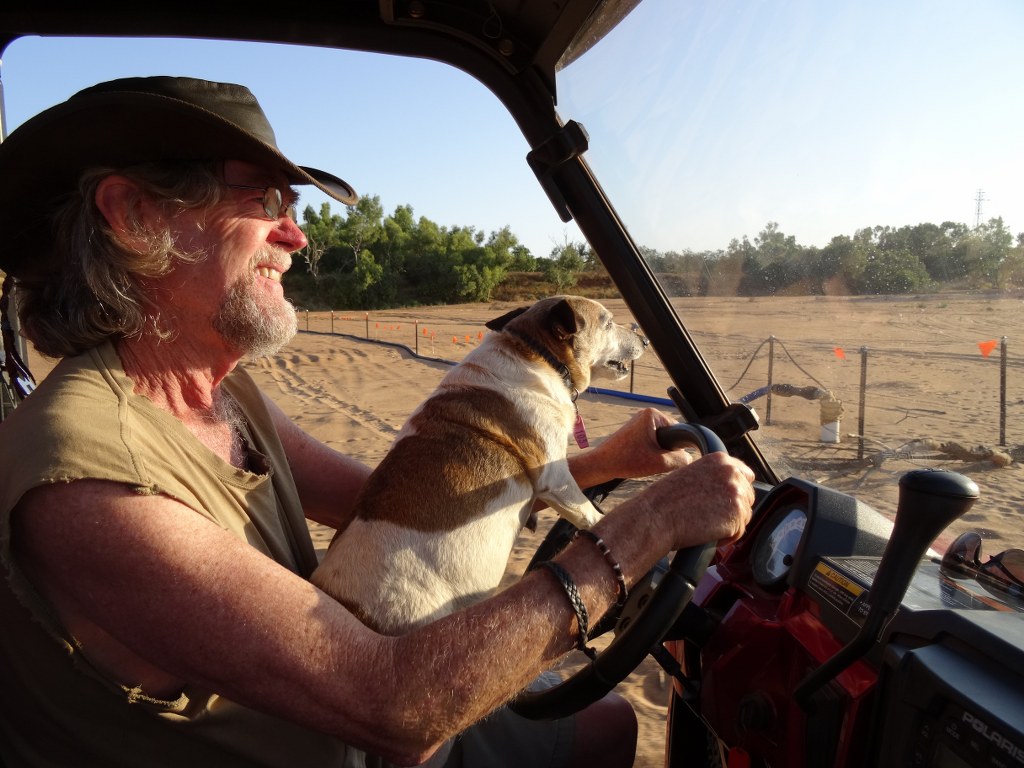 Using an elaborate system of wells and pumps, there is abundant water for the trees and domestic purposes, including a large in-ground pool and vehicle washing. After months of dust and bore water, Rod and I were in heaven. I got to swim every day in crystal-clear river water and Rod finally got to wash the bulldust off of Leo and The Wombat until they were squeaky clean and shining like brand new. 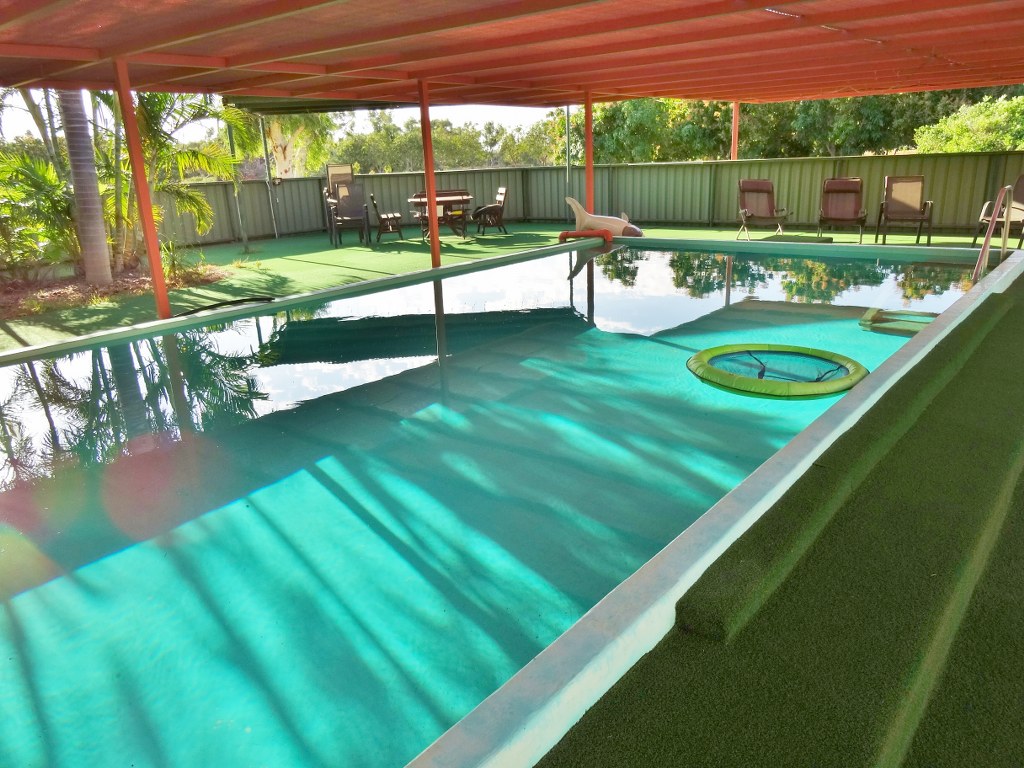 We were out of croc country, but still had to be wary of other local wildlife. 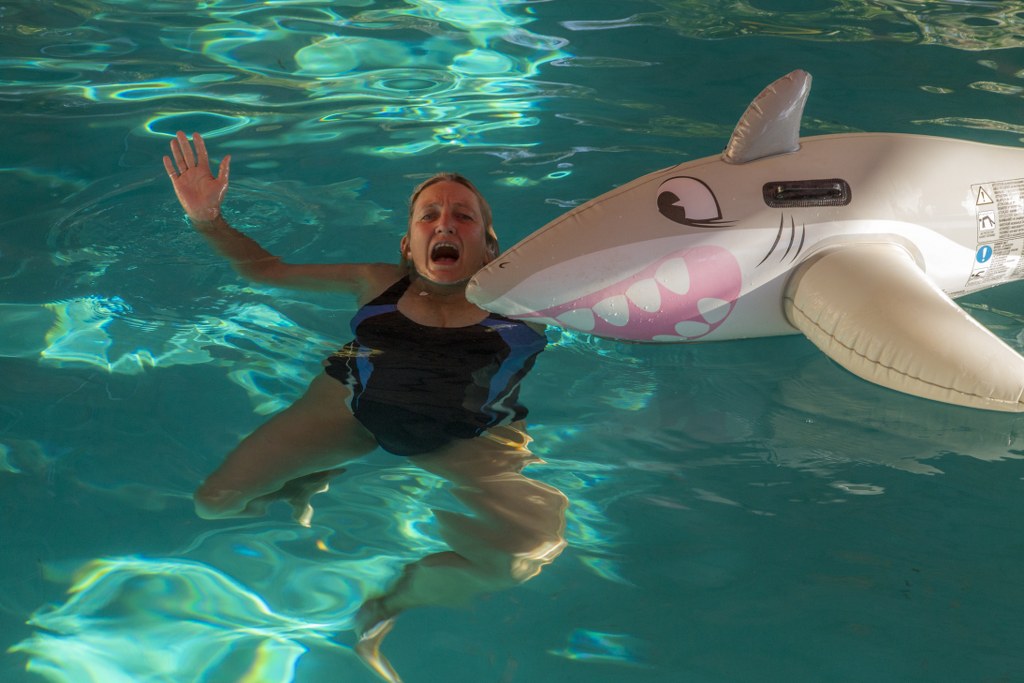 We had an enjoyable few days with our hosts, meeting the neighbours and feasting on locally caught fish before they headed off to Perth. We spent some time exploring the lovely town and surrounding area of Carnarvon.  We attended the weekly markets, Rod went to a Waifs concert, and we met the lovely Lisa, Carnarvon’s finest celebrant.

Yes, we finally started the process to get hitched! We still have NO idea where or when, but we have a celebrant and all the relevant forms have been lodged. Date TBA. Watch this space. 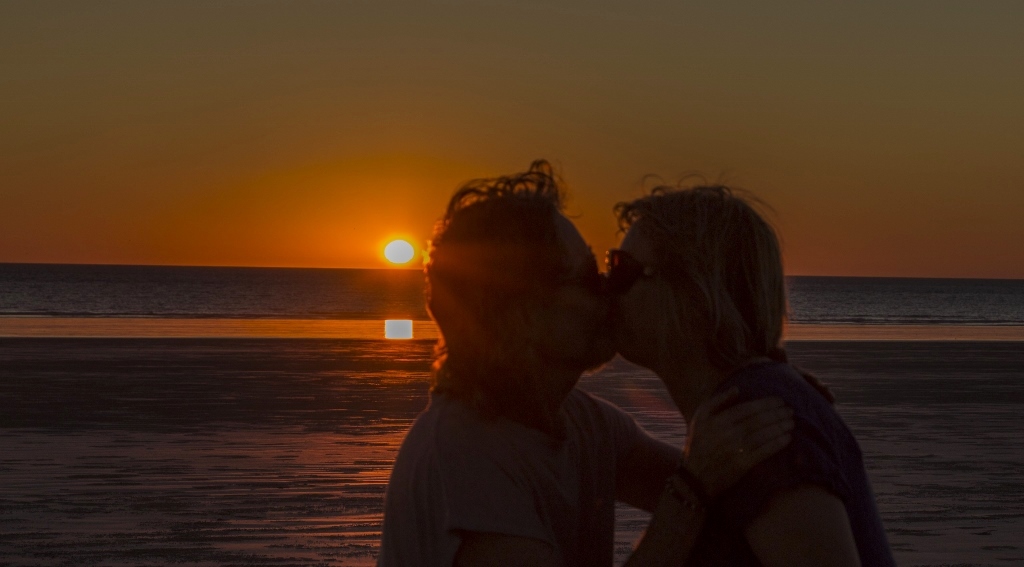 After three glorious weeks, it was time for us to move on, but we didn’t go far. Quobba Point is only about 80 kilometres from Carnarvon. There are some awesome blowholes, bush camping on the beach and the most amazing snorkelling you could imagine.

We spent countless hours snorkelling in the shallow lagoon, surrounded by an enormous variety of coral and tropical fish.

Then we discovered the deep holes at the far end of the lagoon, which featured coral in all shapes, sizes and colours, giant clams and schools of incredibly friendly fishies. 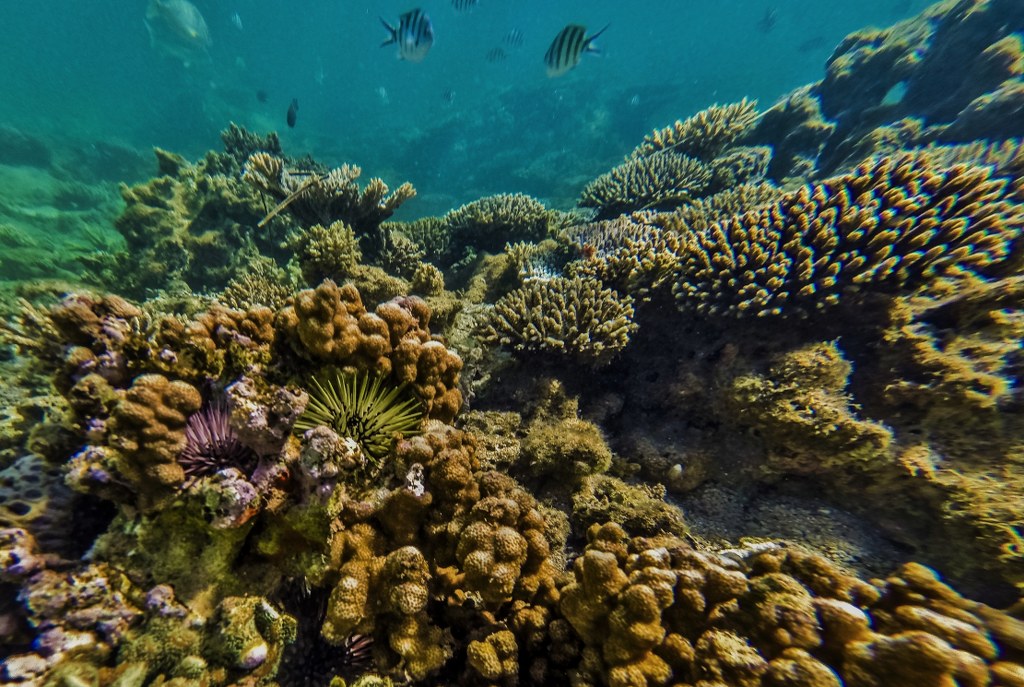 Little did I know, these guys weren’t just being curious, they expected a meal and were quite demanding about it, the little buggers.  As soon as I stood up to share my discovery with Rod, they started nibbling my legs! (Full disclosure: I screamed like a little girl and started batting and kicking them away. They thought I was weird.)

We found out (later) that it is a common local practice to stand at the edge of the “deep end,” and throw bread to the fish, to get them to swarm in a feeding frenzy. Photographers, little kids and international visitors find it quite thrilling, apparently. 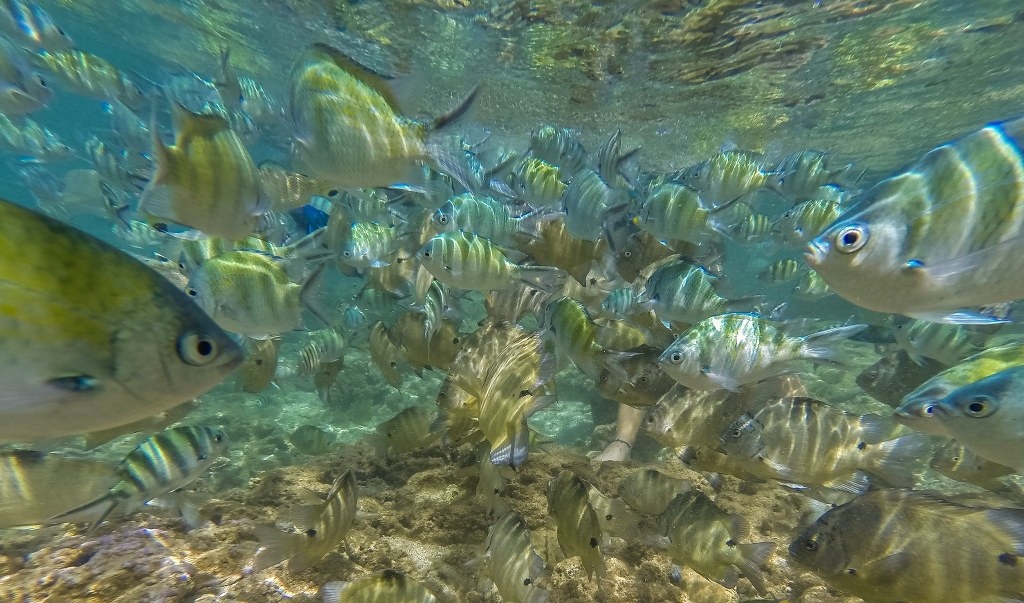 Personally, I found it a bit off-putting, and started wearing tights in the water. (Plus, I don’t think bread is very good for fish.)

Freeloading fish aside, I couldn’t get enough of that beautiful underwater garden! We ended up in the water most days. 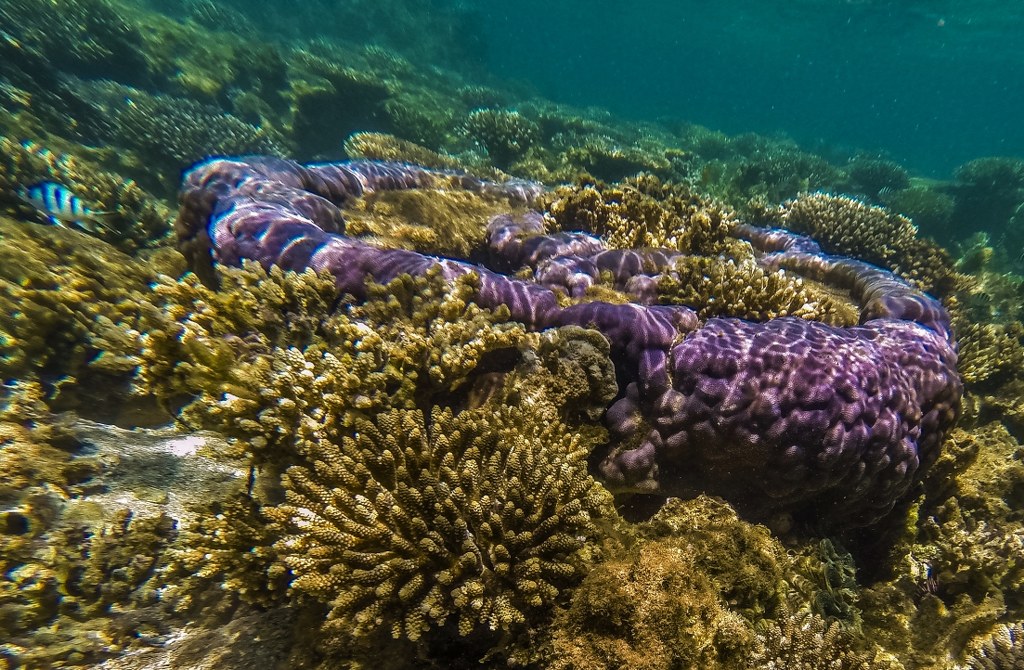 We spent a very relaxing week-and-a-half there, snorkelling and exploring the area.  Basically being Beach Bums.

Occasionally we took a break from snorkelling to toast the setting sun. 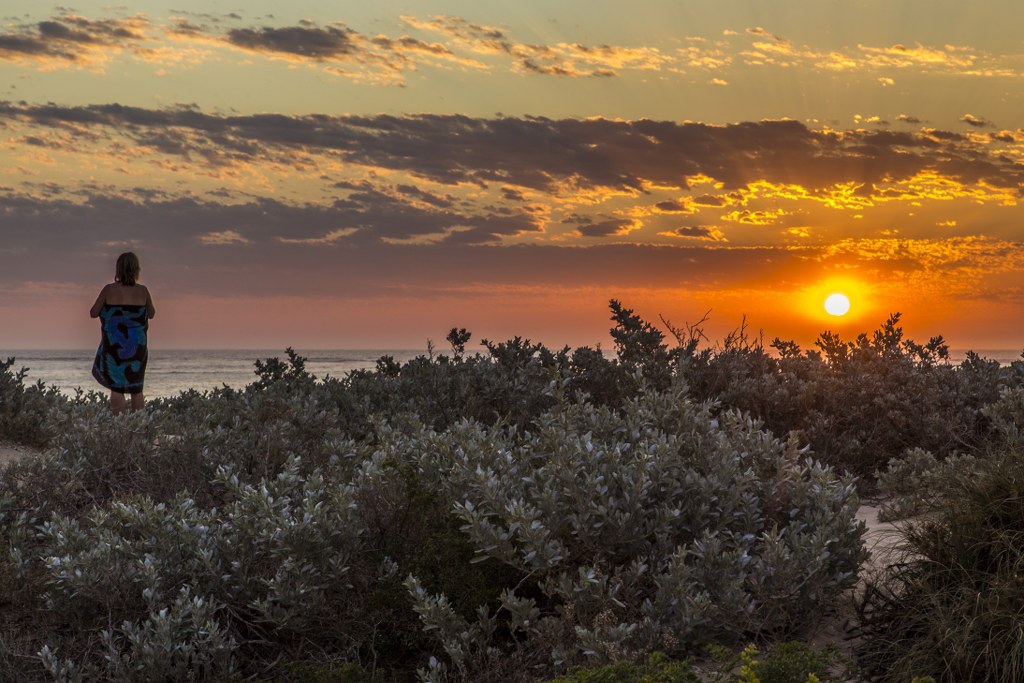 Or soak up the atmosphere at the blowholes. 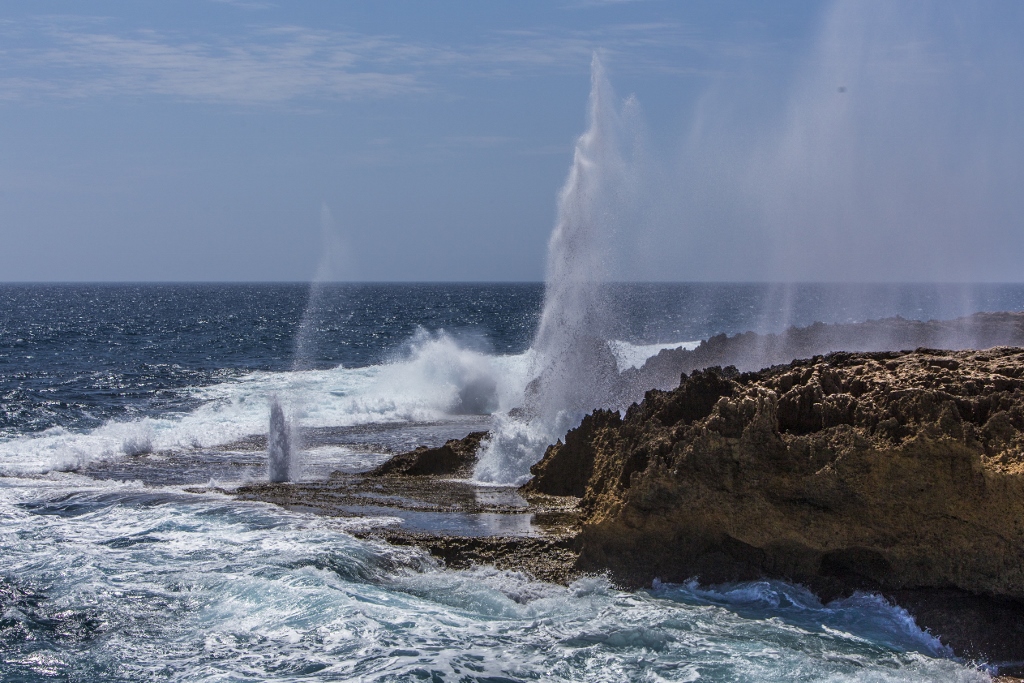 One afternoon (after snorkelling) we took a drive along the coast to Red Bluff, popular with surfers and campers. Rod did the walk out to the point, while I went for a dunk and relaxed in the shade. 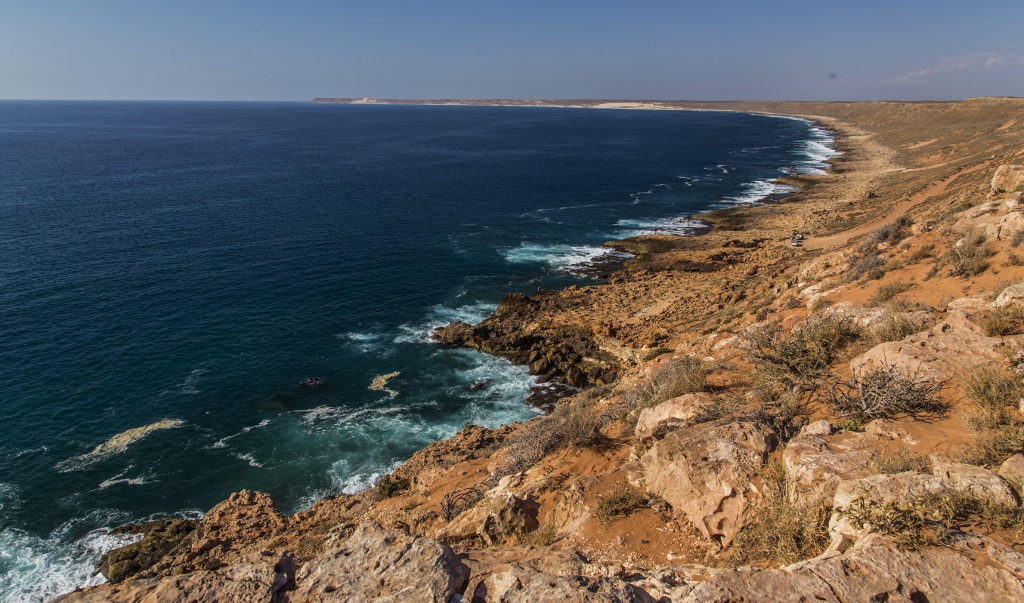 On the way home, I was impressed by this giant truck returning from a hard day at the salt mine.

We had the “best spot in the campground” (again), and because we had managed to change both vehicle registrations to Carnarvon plates, we were considered local residents and got to camp for free! How good is that? 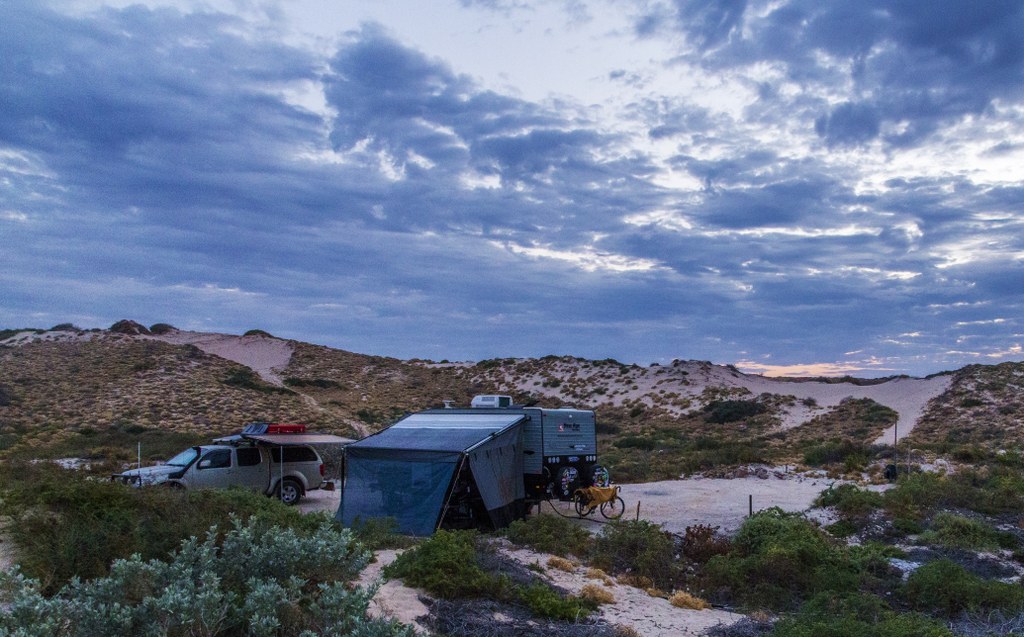 We also received our decal with our CB “handle.” Now we are proper nomads! 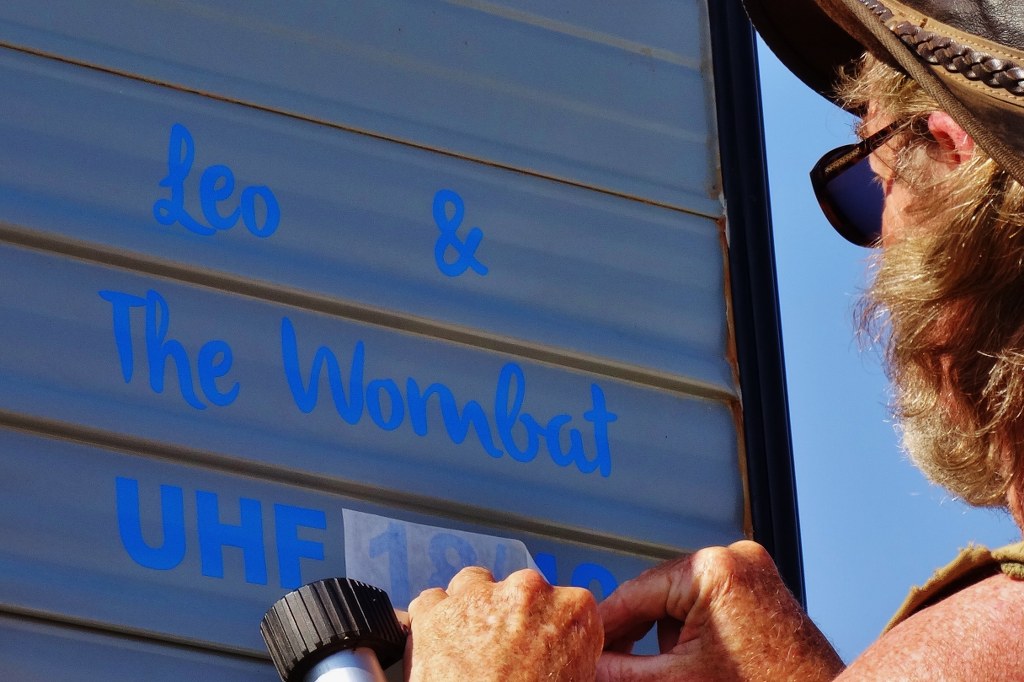 As excited as we were to head south to the World Heritage listed Shark Bay, the special time spent at Carnarvon and Quobba Point will stand out as one of the highlights of our travels.